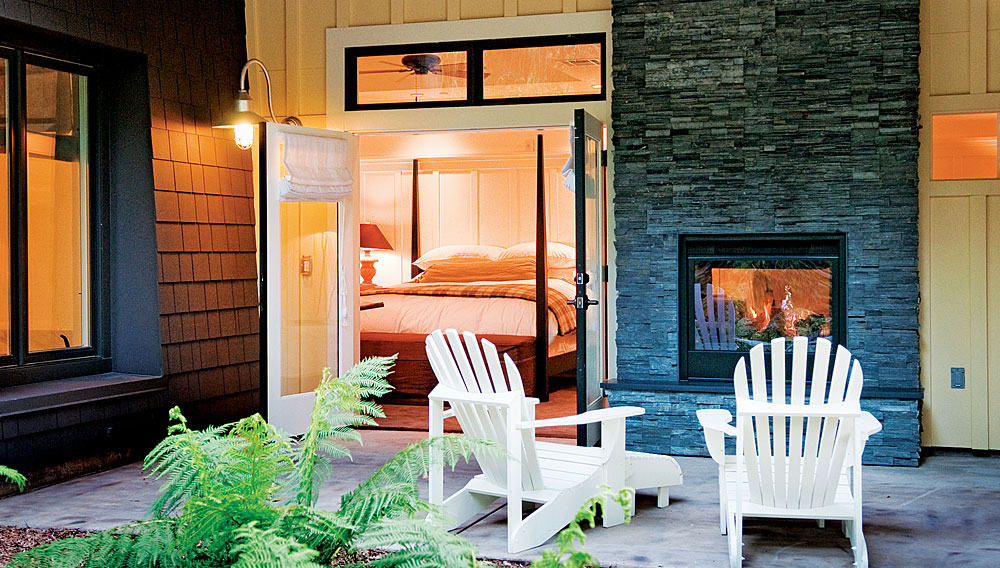 Geoff Kruth steers his Toyota Camry down a gravel road lined with industrial-size waste bins and derelict autos. At a dead end, he pulls up beside a brick-and-wood warehouse, where a friendly Red Heeler mix greets the master sommelier and his guests from the nearby Farmhouse Inn.

Kruth, the wine director at the Forestville, Calif., inn, has brought his guests to this former apple-processing factory to experience what he calls “the most exciting things going on in [Sonoma County] in the last three years.” His enthusiasm is palpable a few minutes later, when he leads his group inside the warehouse—a production facility shared by the Wind Gap and Arnot-Roberts wineries—and sits at a makeshift bar set with glass laboratory beakers doubling as decanters.

Duncan Arnot Meyers, the co-owner of Arnot-Roberts, pours a ruby specimen from a beaker into a row of glasses. Kruth swirls the wine—an Arnot-Roberts 2007 Fellom Ranch Cabernet Sauvignon—then takes a wide sip and smiles. “Isn’t it cool to have California wines you actually want to drink?” he says, noting the Cabernet’s silky texture and floral and mineral components. “This is a very sexy wine.”

As one of just 103 master sommeliers in the United States—and the only one in Sonoma County—Kruth has a distinct vantage from which to critique the local vintages. “Geoff’s a tremendously unique person, with an edgy sensibility,” says the Farmhouse’s co-owner Catherine Bartolomei. “He’s tapped into what’s going on in Sonoma County.”

That access proves beneficial to the Farmhouse’s guests, who can join the 34-year-old Sonoma resident on custom tours of some of his favorite wineries in the region. Kruth, who joined the Farmhouse in 2006, graduated from Sonoma State University before completing the French Culinary Institute’s Classic Culinary Arts program in New York. His arrival at the Farmhouse coincided with a small renaissance for the Russian River Valley hideaway, which Bartolomei and her brother, Joe, acquired in 2001. The siblings have been updating the property ever since, most recently adding eight “barn rooms”—poetically decorated suites with vaulted ceilings, steam showers, and indoor/outdoor fireplaces, where guests can warm up as they sip a spicy Scherrer Zinfandel or one of the other in-room selections Kruth chooses based on his philosophy that wine should be an “adult beverage.”

“We’re raised on sweet foods and beverages, and the tendency in winemaking has been to go after that American Coca-Cola palate,” he says. “Traditionally, with European palates, there’s an astringency and bitterness—flavors that are not so sweet. A lot of American winemakers are afraid to make adult-flavored wines.”

Like Kruth’s in-room selections, his bespoke tours (beginning at $500) aim to illuminate wines that are driven less by marketability than by depth, ageability, and suitability with foods—and his clients’ tastes. “I like to get an idea of what guests like to drink and what type of experience they’re looking for,” he says. “Do they want a rustic barn or a fancy tasting room? Do they want the wine-geek tour or a luxury tour?”

In addition to Arnot-Roberts and Wind Gap, Kruth’s local favorites include Copain, Anthill Farms, Radio-Coteau, and Littorai wineries, all of which are represented on his approximately 500-selection list at the Michelin-starred Farmhouse Restaurant. “There are a lot of wines I could go buy that score 100 points, and I could put a big markup on them, but I won’t do that,” he says. “I’m focused on what I think are the great wines of Sonoma County.”