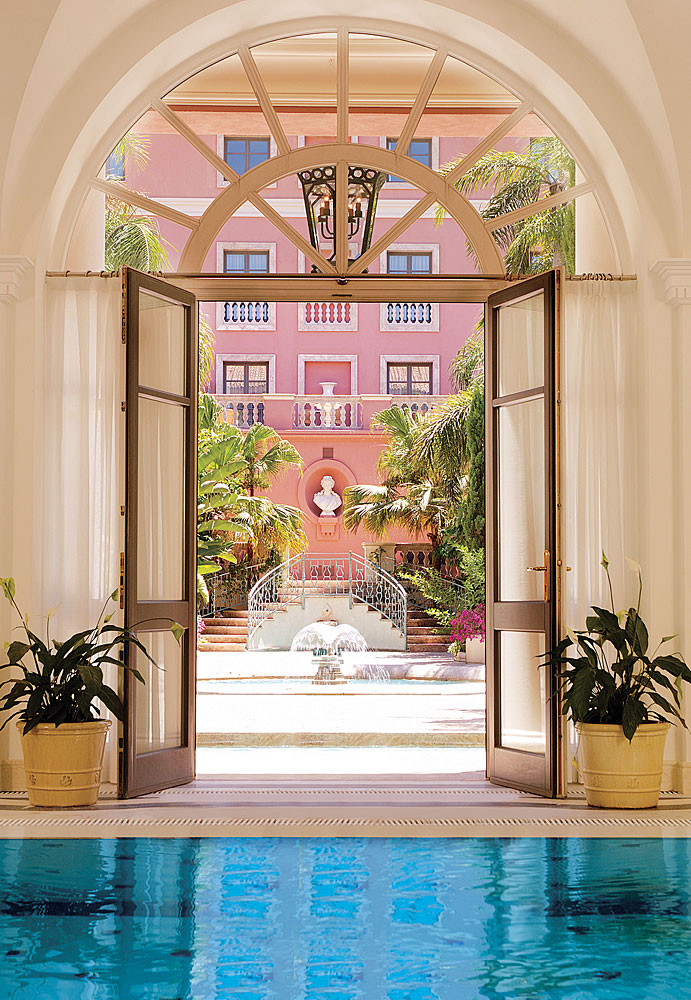 As they migrate between Africa and northern Europe each spring and fall, flocks of flamingos stop to rest at a natural lake on the golf course at Hotel Villa Padierna in Marbella, Spain. Generations of these birds followed this route long before Marbella became a fashionable destination in the 1960s, and they have returned year after year in the ensuing decades. Most Marbella regulars were not so loyal; the beautiful people began flocking to other destinations as overdevelopment and congestion diminished the allure of this resort town on the Costa del Sol.

Though set apart from the crowds of Marbella proper, Villa Padierna is not above the region’s construction craze. The rumble of bulldozers echoes off the arid hillsides that border the property, where in 2001 Spanish entrepreneur Ricardo Arranz opened the 18-hole Flamingos Golf Club. Two years later, he unveiled Hotel Villa Padierna, which became a Ritz-Carlton property in spring 2006. Arranz opened the Roman-themed Thermae Spa that fall, and this summer, on a nearby stretch of coast, he debuted a private beach club for Villa Padierna guests. A second 18-hole golf course, called Gran Flamingo, will open by the end of this year, and Arranz plans to add a third course next year, along with a hotel wing that will feature nine one- and two-bedroom villas, each with its own pool.

Englishman Ed Gilbert—Villa Padierna’s architect, interior designer, and landscape designer—half jokes that his “baby” got a little out of control. A decade ago, he and Arranz, who have been friends for some 20 years, discussed the idea of building an exclusive hotel for golfers. “The idea was to make it like a vast private residence that had been converted into a hotel,” says Gilbert, who also wanted to convey the sense that “the home’s owner had recently returned from a classic European grand tour collecting paintings and sculptures.”

Arranz helped achieve this effect by contributing from his collection hundreds of urns, marble statues of Roman gods and goddesses, sphinxes, fountains, and other pieces that now decorate the resort’s indoor and outdoor spaces. Some of the items came from the family homes of Arranz’s wife, Alicia Villapadierna de Arranz, who is the daughter of the late Count of Villapadierna, the hotel’s namesake.

Ancient Rome also influenced the design of Villa Padierna’s spa, which Gilbert modeled after Roman baths. “The thermal circuit is a very established treatment method,” he says of the spa’s network of areas that are maintained at varying temperatures. As he did with the hotel, Gilbert added elements from other cultures to the Roman concept. The Thermae Spa’s circuit alternates between showers, cold plunge pools, a large indoor swimming pool, two Finnish saunas, and elaborate, marble-clad steam rooms, each of which has a different design and treatment theme. Vapor of Bali offers a light heat infused with vanilla oils, while Baño Turko is a large, steamy Turkish hammam. Vapor of Salt features marble seats, statues of Asian gods, and a pedestal filled with sea salt, which you can rub on your body to exfoliate and cleanse your skin.

Gilbert says that the spa is integral to Arranz’s end goal with Villa Padierna: to restore some of the glamour and exclusivity of mid-1960s Marbella. “When the site relaxes a little, we will suddenly find ourselves in a wonderful oasis,” he says. While it is too soon to gauge Arranz’s success, it is likely that most visitors to Villa Padierna, like the property’s feathered guests, will feel compelled to return.