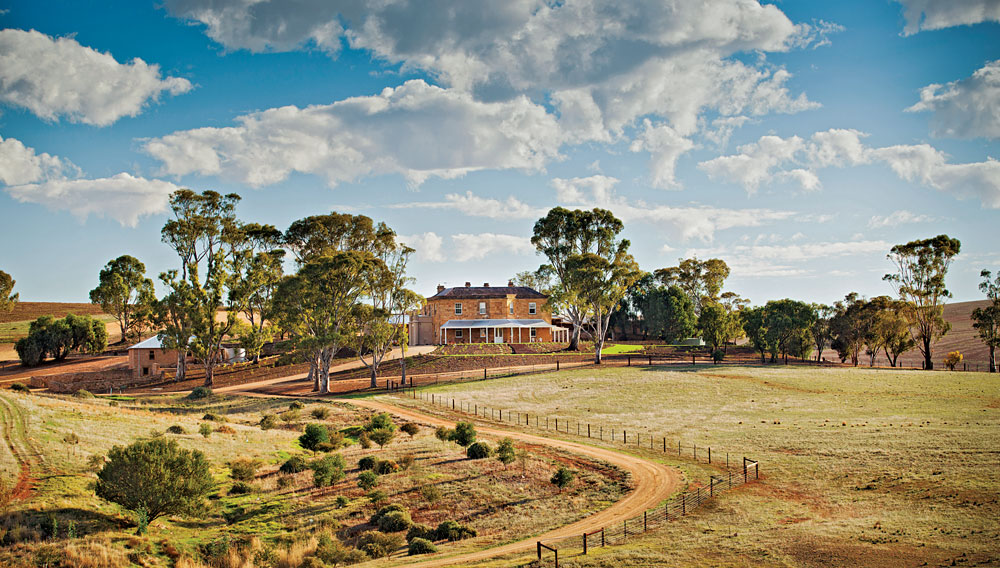 Stefan Ahrens grew up riding dirt bikes on a 250-acre sheep ranch near his home in South Australia’s Barossa Valley. In 1999, the fifth-generation native of the vineyard-strewn valley attempted to acquire the ranch’s stone farmhouse, which dates to the mid-19th century. His first effort rebuffed, Ahrens waited a decade before finally purchasing the property in 2009. Following a three-year renovation, Ahrens opened the 157-year-old farmhouse and the surrounding acreage as Kingsford Homestead, an insider’s retreat in Australia’s premier wine destination.

“It was a purchase of love,” says Pat Kent, who managed the seven-suite resort when it opened in July 2012. “The Barossa winemakers and Stefan played footy together. They went to school together. They dated each other’s sisters. [Kingsford Homestead] is Stefan saying, ‘I’m filling the cupboards with wines from my mates. I hope you enjoy them.’  ”

These wines encompass many of the region’s best-kept secrets, including vintages from David Franz, the son of the Australian winemaker Peter Lehmann, and Langmeil Wines, which claims to have 170-year-old Shiraz vines—possibly the world’s oldest pre-phylloxera Shiraz plantings. “That is the Barossa secret,” says James Lindner, the son of Richard Lindner, who helped purchase and restore Langmeil in 1996 along with his cousin and brother-in-law. “The world does not know we have these unique old vineyards that are irreplaceable.”

Ahrens’s connection to this tight-knit community—some 750 families, many of whom have been in the Barossa for six generations, are growing wine in the valley—proves beneficial to guests of Kingsford Homestead. Visitors can take custom tours of Ahrens’s favorite local wineries, experiences that are more akin to reunions than conventional cellar-door tastings. Franz, for one, welcomes guests with locally sourced snacks that may include aged cheese from a neighboring farm, homemade sourdough bread, or his personal recipe for salami.

Visitors can opt to tour wineries via Barossa Helicopters, a 27-year-old family-owned company that flies guests directly from Kingsford Homestead’s backyard. Like many of the area’s residents, the pilots—whose personal vineyard supplies grapes to Penfolds—have deep roots in the Barossa, their ancestors having settled in the region some 120 years ago.

The Barossa tradition continues back at the seven-suite resort ($810 to $900), which is located less than an hour from Adelaide. Set at the end of a long gravel road, the inn immediately makes guests feel at home with a greeting from a border collie named Eddie.An expansive veranda features Adirondack chairs overlooking the Barossa’s rolling countryside and leads to a lobby with a restored Australian-cedar staircase.

Breakfast and three- to five-course dinners are homemade and served daily in the communal dining room, outside on the veranda, or downstairs in the original stone cellar. For lunch the staff will pack a picnic with local items or will recommend eateries such as Hentley Farm’s new gourmet restaurant, which is housed in a refurbished barn.

“Stefan genuinely wants people to experience the community he grew up in,” says Kent. “It is a bit of home, the bush, and Australia’s heritage.”