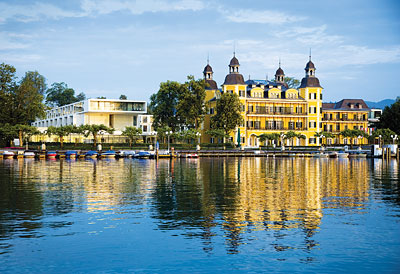 Perhaps it was the Champagne that put me in the mood to go parasailing. Never

in my life had I considered being pulled through the air by a motorboat, but

then, never before had I drunk two glasses of Dom Pérignon Vintage 1999 at

breakfast. Within half an hour of the meal, one of the personal assistants at

the Schloss Velden hotel had arranged everything, and there I was, flying 300

feet over the Wörthersee in Velden, Austria. A parachute trailed behind me,

women in bikinis lounged on sailboats below, and on the western shore of the

lake, bright in the morning sun, the newly reborn Schloss Velden rose to its

four spiking towers, like a golden crown upon this modest resort town in the

Schloss Velden first debuted as a hotel in 1891. Nearly a

century later, the neo-Renaissance Schloss, or château, became a private

residence, but an opening-night party this May marked a new chapter for the

property—as well as for a veteran American hotelier. Schloss is the first hotel

in the Capella Hotels & Resorts chain, which former Ritz-Carlton president

and COO Horst Schulze founded in 2005. In 2006, Schulze teamed with Austrian

property back into a hotel. The partners spent $175 million renovating the

château, adding a contemporary wing, and preparing the staff for Schloss

Instead of Dom Pérignon, Roederer Cristal flowed at the

four-course meal for a ballroom full of visiting dignitaries. But the hotel

revealed its true character the next day, when, after most of the dignitaries

had gone, the food and wine kept coming at a celebratory pace, and the service

remained sublime. A staff member improvised for me a private tour by boat and

taxi of nearby Klagenfurt on zero notice, a doe-eyed young woman gave me a

massage in the spa, and Sacher torte and wild-berry schnapps appeared in my room

before bedtime. When I asked for afternoon tea to wash down a phalanx of

Austrian pastries, I specified Darjeeling. “Will that be spring- or

summer-harvest Darjeeling?” replied my waiter, without skipping a beat.

boss, who described to me his expectations for Schloss Velden over tea. “We want

rooms, and in the sense of elegance, but we do not want to get away from

providing a local experience of Austria,” said Schulze, who was born in Germany

and now lives in Atlanta, where Capella is based. “We provide a local experience

expert in the region.”

Schulze plans to duplicate this approach at

each of Capella’s properties, which, by 2009, should include hotels and resorts

in Ireland, Mexico, Colorado, Germany, and Singapore. With its Austrian

property, the company has established an impressive benchmark. Visiting a hotel

at launch is akin to tasting red wine in the barrel; just as you have to

anticipate how the wine will mature, you can only guess at how a new hotel will

develop over time. Schloss Velden appears poised to deliver on Schulze’s own