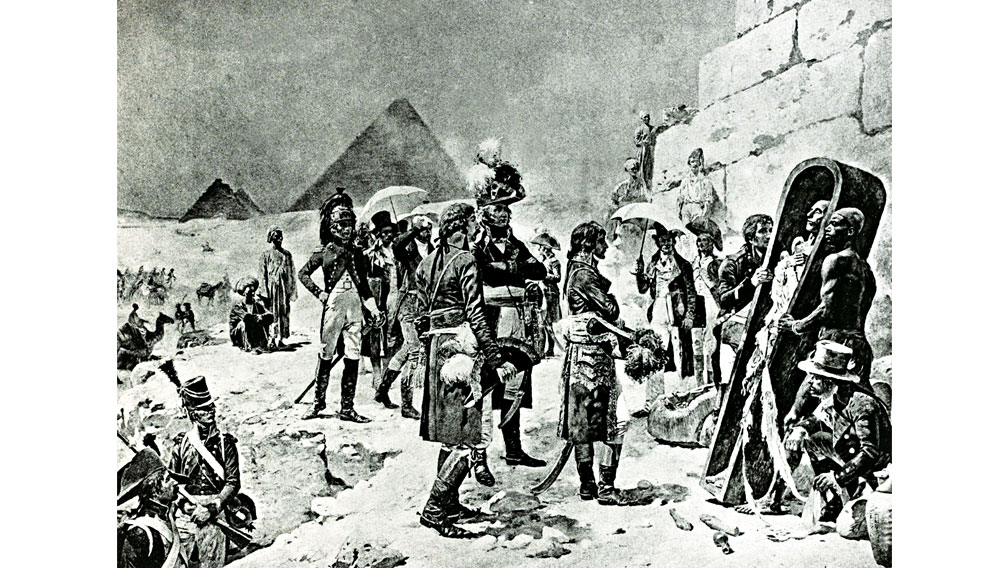 On July 27, 1798, a convoy of 29 carts entered Paris through the present-day Quai d’Austerlitz, carrying a curious cargo that spanned much of the history of Western culture. This payload, which officials had hoped would arrive before the newly inaugurated Bastille Day celebration, had been the topic of fervid debate among the leaders of the new Republic, each of whom had his own ideas about how the prize should be unveiled. Yet the suggestion of one commissioner, André Thouin, aligned most closely with the Corsican general’s own vision: a triumphal procession in the manner of ancient Rome. Thus, the crowds that day were treated to a pageant worthy of Caligula. Interspersed among camels and lions were wagons loaded with the plunder of Napoléon’s first Italian campaign—Etruscan relics, more than a thousand rare manuscripts, and hundreds of art treasures, including the Laocoön, the Apollo Belvedere, Raphael’s Transfiguration, and the four bronze horses from the basilica of San Marco in Venice. A banner proclaimed, “Greece yielded them; Rome lost them; their fate changed twice; it will not change again.”

This spectacle was not the last of its kind during Napoléon’s career, nor was it the first instance in which war served as midwife to a great collection of art and antiquities. Beginning with the sack of Syracuse in 214 BC, the Romans displayed the loot of battle as symbols of victory, and Napoléon, who modeled himself after the Caesars, contrived to identify his regime with imperial Rome by capturing the artistic icons of its civilization.

Yet Napoléon surpassed his imperial predecessors by establishing an elaborate and well-organized system for expropriating cultural artifacts from all over Europe and the Mediterranean to fill the halls of the Louvre. The Roman emperors for the most part allowed their conquering generals to select the masterpieces to be hauled back to the capital as tribute; but France’s budding dictator brought tactical efficiency to this process through the Commission Temporaire des Arts, a panel of experts that provided the army with a well-honed list of objects to seize in the countries it was about to invade.

Within this voracious bureaucracy, several luminaries emerged, yet none shone brighter than Dominique Vivant Denon, a gifted jack-of-many-trades whose connoisseur’s eye gave guidance to Napoléon’s aesthetically blind ambition. A writer, scholar, engraver, and one-time diplomat, Denon evaded the horrors of the Revolution by traveling to Venice. Upon his return to Paris in 1792, he made the acquaintance of Madame de Beauharnais, the future Empress Joséphine, through whom he met General Bonaparte. In 1798, determined to conquer Egypt with the aim of interrupting British commerce with India, Napoléon invited Denon to join the expedition. Like the 150 other savants—artists, academics, and scientists—who accompanied the troops to Alexandria, Denon recorded his impressions in drawings and detailed notes as he trekked across the North African desert. These images and impressions formed the basis for his tome Voyages dans la Basse et la Haute Égypte pendant les campagnes du général Bonaparte, in which he records, among other wonders, his arrival in Thebes, where the soldiers spontaneously halted before the ruins and broke into applause as though a prima ballerina had just executed a flawless grand jeté.

On the basis of this work, in 1802, Napoléon appointed Denon as the director-general of the imperial museums. Except for the surrender of Alexandria to the British in 1801, Napoléon enjoyed a virtually uninterrupted succession of conquests, while Denon dutifully inventoried the spoils he wished to have removed to Paris. Under Denon’s direction, the Musée Napoléon, as the Louvre was briefly called, became the world’s first modern museum. Denon expressed his satisfaction with this arrangement when he declared that “the hero of our century, during the torment of war, required of our enemies trophies of peace, and he has seen to their conservation.”

In contradiction of the banner that led the Parisian procession of 1798, however, the fate of roughly half of these treasures would indeed change again, though the remainder, thanks to diplomatic maneuvering, would be spared. After Napoléon’s defeat at Waterloo in 1815, troops from Britain, Russia, Austria, and Prussia entered France, and those victorious nations followed their enemy’s suit, claiming the Louvre’s vast collection as their own trophies of peace.