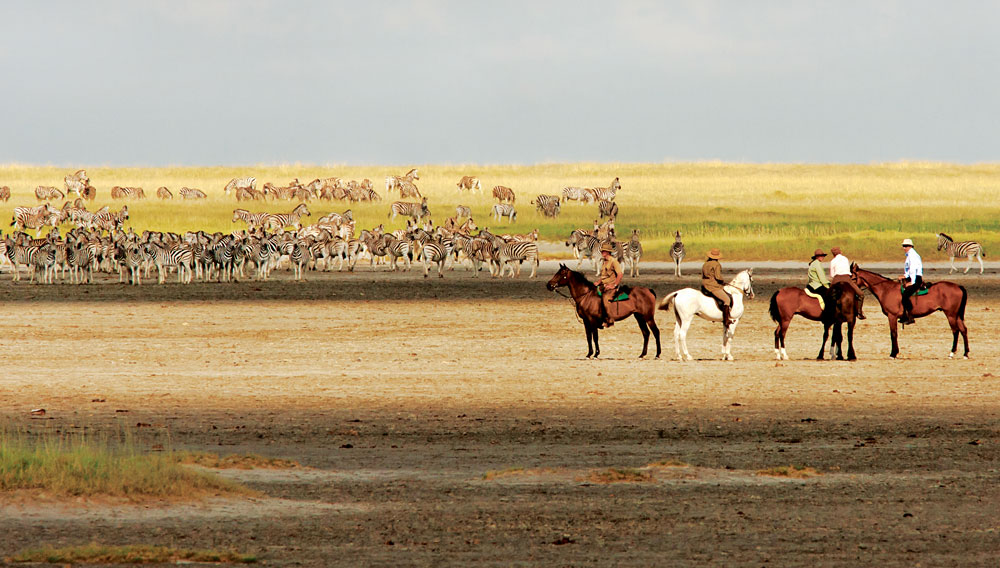 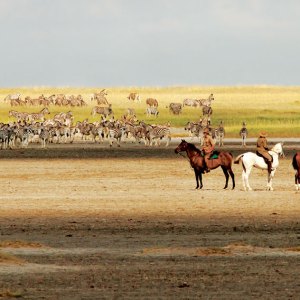 The Adventure › A 14-day horseback-riding journey through Botswana.

The Outfitter › The safari expert Cherri Briggs first started visiting Africa more than 20 years ago on wildlife-conservation missions. “I was trying to raise awareness and funds, and I had a lot of people around me who were looking for real genuine experiences, so I saw an opportunity to combine my efforts,” she says. In 2002, she founded Explore, a Colorado-based outfitter specializing in custom African safaris that fuse luxury with adventure. Briggs has personally guided expeditions including crossing the Bayuda Desert of Sudan and making the first known descent down Mozambique’s Lugenda River. “We definitely excel at out-of-the-box trips,” she says. “We are always trying to find an edge.”

The Itinerary › According to Briggs, who was raised on a cattle ranch in Nevada, one of the best ways to experience the African savanna is on horseback. “The idea of moving yourself through the wilderness outside of a car is really amazing because you become part of the wildlife,” she says. “Your presence is less obtrusive, and you have a very different appreciation because you are not separated by technology.”

For the ultimate equestrian safari, Briggs recommends a journey to Botswana, where the diverse ecosystems of the Okavango Delta and the Kalahari Desert are particularly suited to a horse’s pace. Beginning at the newly renovated Macatoo Camp—located on the western side of the approximately 6,600-square-mile delta—riders spend five hours per day crossing the floodplains, pushing through tall grasslands, and falling in step with herds of giraffes, zebras, elephants, and wildebeests. On day six, they board a helicopter headed for nearby Abu Camp, where, instead of horses, they ride elephants through the savanna for the next three days. From there it is a short helicopter flight to the Kalahari Desert’s San Camp for horseback excursions to Chapman’s Baobab (a 4,000-year-old tree visited by such early explorers as David Livingstone and Frederick Selous) and the “land of a thousand islands” (an ancient lake bed covered with sand dunes and palm trees).

The itinerary’s greatest challenges come with the frequent water crossings required in the Okavango Delta, as well as the unpredictability of animals in the wild. “Running through the water with zebras requires a bit of skill,” Briggs says. “Of course, I have also seen horses almost run right into a pride of lions. Out there, anything can happen.”

The Extreme › At the Makgadikgadi Salt Pans, riders

can race uninhibited across the 6,200-square-mile dry lake bed, galloping past massive baobab trees and clans of meerkats along the way. “The ride across Makgadikgadi Pans is just mind-blowing,” says Briggs. “It’s like riding on the moon.”