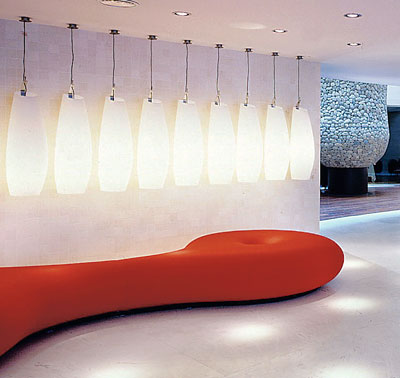 When the Frank Gehry—designed Guggenheim Museum opened in Bilbao in 1997, this industrial hub in northern Spain suddenly became an international tourist destination. The Basque city’s undulated, titanium-and-steel landmark also helped lure other renowned architects from around the world: Japan’s Arata Isozaki designed the gate to Bilbao; Spaniard Santiago Calatrava built the airport and a bridge over the Nervi—n River; England’s Sir Norman Foster designed the subway system; and Argentine architect César Pelli created a waterfront park. Spain’s Javier Mariscal, however, faced what was perhaps the city’s most daunting architectural task when he was commissioned to build a hotel directly across from the Guggenheim.

The site for Mariscal’s Gran Hotel Domine Bilbao is both a blessing and a curse. No location in the city offers a better view, and yet no neighbor casts a more intimidating shadow. With its asymmetrical forms and nontraditional materials, Gehry’s silvery structure is so bold that it is sometimes criticized for overpowering the artworks displayed on its walls. Mariscal, therefore, did not attempt to compete with the museum, but instead utilized it to his advantage.

On the facade of the hotel facing the Guggenheim, Mariscal stacked and angled window panels to act as mirrors that reflect images of the museum. A more modest entrance on the opposite side blends with the adjacent neoclassical buildings, but regardless of which way you enter the Domine Bilbao, you pass through its six-story atrium. At the center of the atrium rests Cypress Fossil, an 85-foot-tall, 90-ton, cylindrical sculpture of stones wrapped in mesh.

Mariscal exercised more restraint in the Domine Bilbao’s guest rooms, where glass, limestone, and steel appear to be a continuation of the Guggenheim’s exterior. He designed several of the rooms’ furnishings, including the lamps, the beds, and even the wool and cashmere bedspreads. The bathrooms, which are partitioned from the bedrooms with large glass walls, include faucets designed by Arne Jacobson, stools by Alvar Aalto, and, in rooms facing the Guggenheim, Philippe Starck bathtubs positioned so that you can soak while staring at the museum.

LOCATION Across the street from the Guggenheim on Bilbao’s Alameda de Mazarredo. ACCOMMODATIONS The six-story structure houses 131 guest rooms and 14 suites, which afford views of either the museum, the city, or the hotel’s atrium. facilities The library, business center, and lounges contain furnishings by mid-20th-century designers Alvar Aalto, Charles Eames, and Isamu Noguchi. DINING Beltz the Black features contemporary Basque cuisine from chef Ramon Berriozabal. The hotel’s street-level cafeteria sits directly across from the Guggenheim’s entrance. CONCIERGE RECOMMENDS After a day at the Guggenheim, browse the works of Eduardo Chillida, El Greco, and Francisco de Goya at the Bilbao Fine Arts Museum, or peruse the cultural artifacts at the Basque Museum of Bilbao, which occupies a 16th-century church. RATES From $165 to $1,395.