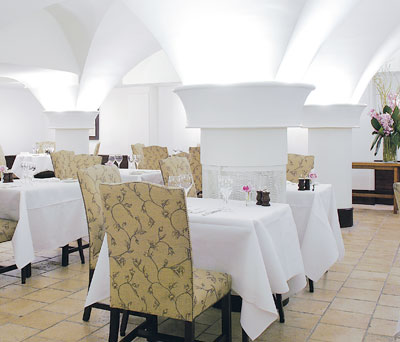 Irish history is inextricably intertwined with the British, and the Merrion hotel’s pedigree is no exception. Mornington House, one of four renovated 18th-century townhomes on Dublin’s Upper Merrion Street that form the bulk of the hotel, was the birthplace of Arthur Wellesley, the Iron Duke of Wellington, who defeated Napoléon at Waterloo. But the Merrion, which opened in 1997 following a $43 million restoration of the townhomes, has its own story to tell, and the tale is as Irish as the debates that rage across the street from the hotel in the Houses of Parliament.

In the 18th century, Dublin experienced a renaissance that transformed it from a medieval town into a great Georgian city, and the Merrion reflects the classical motifs of the era. Delicate rococo stucco birds rest in acanthus leaves on Mornington House’s 14-foot-high ceilings, which have been restored by master stuccadores from Dublin. Marble fireplaces grace the drawing rooms in all of the suites, where light from large windows illuminates details such as the scrollwork on the gold-gilt mirrors and the fine glasswork of the French chandeliers. Even the bedside lamps were custom-made, their designs based on 18th-century delftware.

The hotel also houses a spectacular collection of 19th- and 20th-century Irish art, and an education can be had simply by touring your suite or walking the corridors. Schools represented range from portraiture and landscape to surrealism and Abstract Expressionism. The hotel’s No. 23 Cellar Bar, with its original bricks, Irish oak bar, and terra-cotta flagstone floors, is the perfect milieu in which to contemplate Jack B. Yeats’ (brother of the poet and widely considered to be Ireland’s most influential painter) The Old Grass Road, Kinsale (1925) while sampling from the extensive Irish whiskey menu. Yeats’ The Hour of Sleep (1951), believed to be a self-portrait, hangs in the marbled front hall of the hotel. Directly across from the portrait is a character study by Daniel Maclise, whose greatest work is The Meeting of Wellington and Blucher on the Field of Waterloo, an enormous wall mural in the British House of Lords that celebrates the Merrion’s most famous former resident.

The Merrion’s location in the heart of Georgian Dublin furthers the link to Irish—and British—history. In addition to its proximity to parliament, the hotel is a short walk from the National Gallery, the National History Museum, and Trinity College. Two blocks from the hotel is St. Stephen’s Green, a park anchored by a statue of England’s King George II, the man whose name graces the age that produced the Merrion.

Occupying four 18th-century townhomes and a contemporary garden wing on Dublin’s Upper Merrion Street. Directly opposite the hotel are Ireland’s government buildings, including the Houses of Parliament.

All of the 125 rooms and 20 suites have marble fireplaces, specially commissioned carpets, and 14-foot ceilings. The penthouse offers views of the Dublin skyline.

The Tethra Spa features an infinity swimming pool and an Italian marble steam room. For further relaxation, stroll the hotel’s 18th-century garden or view the spectacular collection of 19th- and 20th-century art on display in the public spaces and guest rooms. Meeting and private dining rooms also are available.

The Cellar Restaurant serves contemporary cuisine, while the Michelin-two-star Restaurant Patrick Guilbaud is known for dishes such as veal sweetbread with licorice.