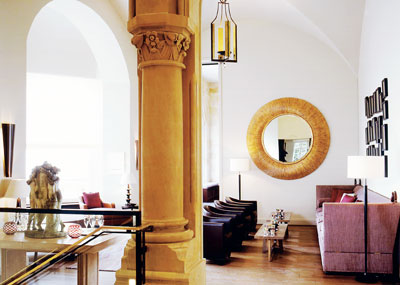 It is likely that no one has ever whispered, in the manner of Bergman to Bogie, “We will always have Frankfurt.” The city on the Main River is the financial center of Germany and the birthplace of Goethe, but it is infamously stodgy and bourgeois. So when Villa Kennedy opened on the Main’s south bank this spring, Frankfurt received a much-needed infusion of pizzazz.

Chic, sleek, and loaded with sex appeal, Villa Kennedy is more reminiscent of London than Frankfurt, which stands to reason considering that its creator, Sir Rocco Forte, is British. For Forte, a flamboyant 61-year-old triathlete and former actor, the Frankfurt property is the latest in his namesake company’s growing arsenal of hotels (currently 13) across Europe. Each of Forte’s properties has a distinct character, but at Villa Kennedy (so named because President Kennedy’s motorcade once rolled down the hotel’s street, which later was rechristened Kennedyallee) he plays off of expectations.

Set within a massive, neoclassic mansion with crenellated stone walls and towers and turrets, Villa Kennedy appears from the outside to be a bastion of bürgerlich convention and propriety. Once inside, however, the mood changes from 19th-century staid to 21st-century sophisticated. Plump easy chairs and sofas in hues of plum and charcoal line the hotel’s minimalist lobby and corridors. The monochrome patterns give way to zebra stripes and leopard spots in JFK’s, the hotel’s bar and lounge, where 80 euros buys you a martini made with Louis XIII Cognac and 40-year-old port.

Forte’s fashion consciousness reaches critical mass in the guest rooms, most notably in the 3,500-square-foot Georg Speyer Suite. You enter the suite on a gray and cream limestone floor, moving down a hall appointed with stone urn lamps, a mobile pendant light by Paul Verburg, abstract art by Peregrina, and a 1940 wardrobe. In the living room, you find sofas by Martin Brudnizki, a Bechstein grand piano, a wall light by Serge Mouille, an abstract painting by Baumbauer, and a 1960s black slate and oak coffee table.

Ultimately, of course, the success of Sir Rocco’s strategy is based not on how many designer works he can cram into a given space, but rather on the clientele Villa Kennedy attracts. It is too soon to gauge whether the hotel will be a smash among Frankfurt’s beautiful people. However, as the crowd at the bar during one recent visit indicated, they do at least exist.

LOCATION Near the restaurants, bars, museums, and shops of Frankfurt’s Sachsenhausen residential area, off the Main River’s south bank. ACCOMMODATIONS The hotel describes the contemporary yet comfortable interiors of its 134 rooms and 29 suites as “minimalist deluxe.” FACILITIES Nine meeting rooms and a 3,550-square-foot ballroom that accommodates as many as 450 people. The hotel’s spa includes a 15-meter indoor pool, a Turkish steam room, a yoga and Pilates studio, a gym, and eight treatment rooms. DINING The hotel’s restaurant, Gusto, is a handsome study in gray monochrome banquettes and columns lit by modernistic wall sconces. The chefs are German, the cuisine is Mediterranean, and the attire is smart casual. CONCIERGE RECOMMENDS With all due respect to Gusto, the concierge suggests heading to Silk, on the east end of town, where guests recline in beds around circular tables while dining on such dishes as pi–a colada mousse frozen in liquid nitrogen; one-hour organic eggs with mushroom and rucola gnocchi; and popcorn, white chocolate, and raspberry gratinée. Be careful not to spill. rates From $620 for a standard room to $4,875 for the Georg Speyer Suite.