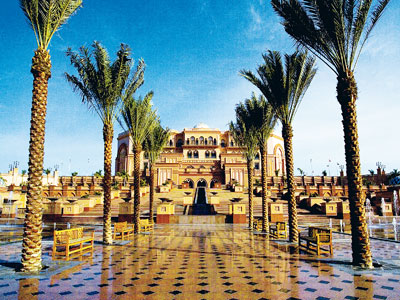 The sheiks in Abu Dhabi witnessed the transformation of Dubai, its fellow United Arab emirate, from a sleepy, sandy town into a tourist destination of mind-boggling proportions. Inspired by Dubai’s spectacles of creativity and wealth–man-made islands modeled after the earth’s continents, a property formed in the shape of a sail and marketed as the world’s first seven-star hotel–the Abu Dhabians decided to mimic the build-it-and-they-will-come strategy. Their answer to Dubai–where every new megastructure is more grand, more expensive, more everything than the last–is Emirates Palace.

The Palace, which opened in 2005 and is rumored to have cost upward of $3 billion to build, is more than half a mile long and 2.6 million square feet in size. The hotel contains 3.9 million cubic feet of marble, 64,500 square feet of gold leaf, 7,000 doors, 1,002 Swarovski chandeliers, 140 elevators, and 128 kitchens. Its staff of 2,000 includes personal butlers and buggy drivers, who shuttle guests from their rooms to the Palace’s eight restaurants, shopping arcade, private beach, waterpark, and two pools. Al Majlis, a public lounge the size of two football fields, is crowned by a gilded, domed ceiling that is larger than that of St. Paul’s Cathedral in London.

In at least one respect, however, the Palace’s developers exercised restraint: This vast expanse houses only 302 guest rooms and 92 suites. It follows, then, that the hotel’s accommodations are anything but ordinary. Gold leaf, marble, and rich Arabian fabrics adorn the sprawling spaces, all of which are outfitted with high-tech gadgetry, including 50- and 61-inch plasma-screen TVs. Indeed, the rooms, and Emirates Palace at large, have eclipsed standards for hotels in Abu Dhabi. At least, that is, until the next one comes along.

LOCATION On the corniche in Abu Dhabi, the capital of United Arab Emirates. ACCOMMODATIONS The hotel has 302 rooms and 92 suites. The 7,300-square-foot Palace Suites have separate drive-in entry gates, private elevators, three bedrooms, three baths, and lavish dining areas. FACILITIES A shopping arcade, two fitness rooms with full-time trainers, a private beach, two swimming pools, a convention center, and a comprehensive range of meeting areas for as many as 1,200 participants. DINING Seafood at Sayad, Italian at Mezzaluna, Middle Eastern at Diwan L’Auberge, Persian at Anar, and a little bit of everything at Le Vendôme Brasserie buffet. For the best ambience, try drinks and caviar at

Al Majlis, dining outdoors at Cascades and Las Brisas, or a meal at the Palace Ceremony, a private restaurant available to one party at a time. CONCIERGE RECOMMENDS Try the Desert Experience, a day that encompasses sand skiing, camel riding, and 4×4 wadi (dune) bashing before ending with a dinner under the stars. rates From $790 to $14,000.