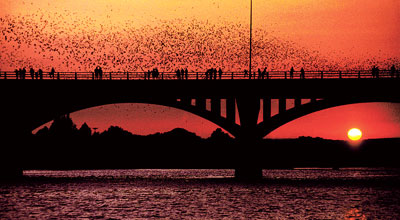 Weird does not typically top the list of attributes one seeks in an urban hotel–unless, of course, one is heading to the capital of Texas. Here, oddity is not merely accepted, it is embraced enthusiastically. With a dichotomy of residents that ranges from artists to techies, vegans to cattle ranchers, and liberal academics to conservative politicians, this diverse (and surprisingly harmonious) city has adopted an unofficial motto of “Keep Austin Weird.”

At the Four Seasons Hotel Austin, weird translates to eclectic. The decor in the hotel’s lobby pairs replicas of battle-worn Republic of Texas flags with a cast-iron chandelier dripping with New Age quartz crystals. And while its facade, facing the state capitol building, is all business, the Four Seasons masquerades as a resort outside the back door, which borders the quiet waters of Town Lake. (A ban on motorboats and Jet Skis keeps it quiet.) Guests can canoe on the lake or walk, jog, and bike along the verdant 4-mile path that runs beside the water.

For more lively entertainment, visitors can venture to one of Austin’s 150 music clubs on Sixth Street, just a few blocks away. (The official slogan of Austin is “The Live Music Capital of the World.”) But perhaps the area’s most thrilling–and strangest–attraction is at the nearby Congress Street Bridge. The bridge is home to North America’s largest urban bat colony, and guests at the Four Seasons can watch from the hotel’s terrace as approximately 1.5 million of the creatures take their nightly flight. The phenomenon, which resembles a long, black ribbon streaming through the sky, began only in the 1980s, when engineers inadvertently created ideal bat roosts while reconstructing the century-old bridge. At first, some of the city’s residents sought to eradicate the nocturnal animals, but when mosquitoes became nearly extinct on the lake–the bats can consume 30,000 pounds of insects in a single evening–Austinites embraced their weird new neighbors.

LOCATION On Town Lake, across from the state capitol building and within walking distance of Sixth Street’s restaurants and live music venues. ACCOMMODATIONS The 291 tastefully appointed rooms include 28 suites that range in size from 345 to 1,856 square feet. All rooms offer either cityscape or lake views. FACILITIES Linked to the fitness center,

the hotel’s petite spa specializes in treatments as simple as sports massage or as elaborate as being slathered in rose oil and then wrapped in a blanket of yellow rose petals. The hotel also has a swimming pool,

and along the lake is a 4-mile walking path lined with wildflowers and oak, pecan, and mesquite trees. DINING Contemporary down-home cooking at the hotel’s restaurant, which takes advantage of Austin’s temperate weather with year-round patio dining. This fall, the hotel is commencing an $11 million renovation that will include a new wine bar. CONCIERGE RECOMMENDS Follow the Texas Wine Trail into the surrounding hill country and taste the Sangioveses, Zinfandels, and Pinot Grigios that are known locally as Super Texans. RATES Midweek tariffs, which tend to be higher than those on weekends, range from $345 to $1,600.