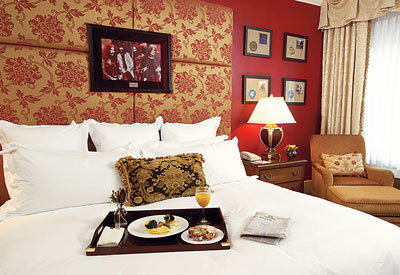 The members of black sabbath are better known for trashing hotel rooms than for decorating them, but in the Sorrento Hotel’s Music Suite, a poster signed by Ozzy Osbourne and his heavy metal cohorts crowns the head of the bed. The poster—which complements the room’s displays of gold and platinum records, a guitar signed (not smashed) by the Who, and a $10,000 stereo system programmed with more than 600 hours of music—speaks volumes about Seattle native Michael Malone’s eccentric hotel on First Hill.

Malone, the recently retired chairman of Seattle-based DMX Music, purchased the now-97-year-old Sorrento in 1981. In the ensuing quarter century, most recently in 2002, he has updated the property to suit contemporary tastes—or, more specifically, his own tastes. His personal touches at the hotel include stiff drinks and weekly jazz concerts in the mahogany-walled Fireside Lounge; an umbrella placed in the closet of each guest room (this is Seattle); and a speed-dial button labeled “I Want” on every room’s phone that redirects to a local department store.

Although several of its rooms are small and dimly lit, the Sorrento succeeds because of its quirkiness and friendly service, apposite attributes in an offbeat city that is more akin to a cup of joe than a glass of Champagne. And yet the Sorrento does display a serious side. The hotel’s most recent renovation equipped the guest rooms with full-size office desks, direct fax lines, color copier/printers, and even Post-it Notes. The simple aids continue in the living areas: A leather valet awaits on a nightstand, ready to receive your keys and the change from your pocket. The bed, meanwhile, is topped with a selection of custom-made feather pillows capable of soothing even the edgiest guest, which may help explain why, when the members of Black Sabbath stayed at the Sorrento during their reunion tour in 2004, no hell-raising antics ensued.

The 34 guest rooms are small. Opt instead for one of the 41 suites or the 1,850-square-foot penthouse, which has a private rooftop terrace.

Bryon Wetzlar suggests you forgo the touristy Space Needle in favor of the 35th-story, open-air observation deck at Smith Tower, built in 1914. Ride to the top of this downtown high-rise in the building’s original brass-and-copper cage lifts, which the owners claim to be the last manually operated elevators on the West Coast.