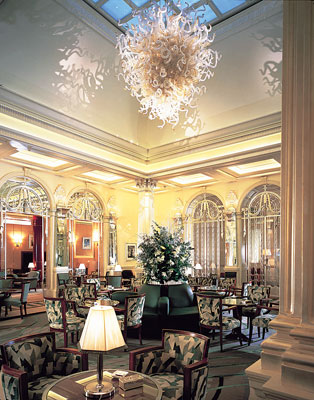 The neighborly relationship between Claridge’s and Buckingham Palace dates to at least 1860, when Queen Victoria and Prince Albert visited the Empress Eugénie, wife of Napoleon III, in her suite at the hotel. Claridge’s, which opened in the heart of Mayfair in 1854, has hosted numerous parties for the House of Windsor in the ensuing century and a half and, like its royal regulars, has defined British panache and elegance for generations of Londoners and visitors. And yet, after a $75 million renovation of the historic property in 2000, Claridge’s finest hour (unlike that of the royals) appears to be now.

Ideally situated between Hyde Park and the shops of Bond and Oxford streets, Claridge’s unfolds on a grand scale (the cavernous corridors were designed to allow easy passage to women in hoopskirts) that is tempered by a well-honed sense of proportion and grace. Tall mirrors, sleek ironwork, fireplaces, and a gilt elevator are highlights of the Art Deco marble lobby. A more glamorous space is difficult to imagine, but you need simply keep walking. Just beyond the lobby is the Foyer, where patrons of Claridge’s much-celebrated afternoon tea sit in plush chairs amid columns covered in silver leaf. A silver-white chandelier–consisting of more than 800 hand-blown pieces of glass assembled on site by designer Dale Chihuly–hangs from the center of an 18-foot-high ceiling.

On the opposite end of the lobby is the uncommonly refined Claridge’s Bar, where specialties include rare Champagnes and such sparkling-wine cocktails as the Flapper. Next door to the bar is the hotel’s Macanudo Fumoir, which offers an extensive selection of Cuban cigars, as well as a wide choice of fine Cognacs, Armagnacs, rums, tequilas, and ports. And although you may not be retiring to Buckingham Palace after a night at the bar and smoking room, you will not be disenchanted with your regally appointed suite at the hotel.

LOCATION On a quiet street in Mayfair in London’s West End. ACCOMMODATIONS The 203 individually furnished rooms and suites include six new executive suites and the Brook Penthouse, a 2,368-square-foot space with two king beds, a private rooftop terrace, and fittings from the 1930s. FACILITIES The Olympus Suite (a spa and health club) plus numerous conference and meeting rooms. DINING Gordon Ramsay’s pan-fried fillets of daurade (bream) on orange-glazed endive offer a compelling taste of the mostly French cuisine at the chef’s eponymous restaurant. Claridge’s main bar is one of London’s best. CONCIERGE RECOMMENDS Take the hotel’s chauffeur-driven Bentley Continental Flying Spur to the docks to catch a luxury barge cruise on the Thames. RATESSuperior rooms start at $850; the Brook Penthouse from $7,830.