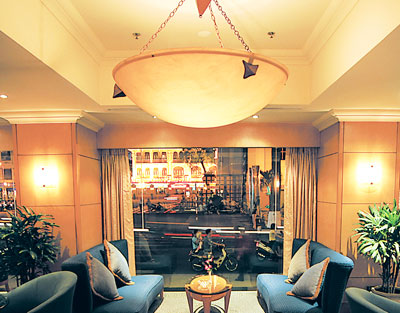 From the rooftop bar­ of the Caravelle Hotel, Vietnam War correspondents routinely watched U.S. Air Force jets streaking over enemy strongholds on the outskirts of Saigon, dropping bombs and leaving pyrotechnic displays in their wakes. “There were dozens of us up there, like aristocrats viewing Borodino from the heights,” wrote Michael Herr in his 1977 memoir, Dispatches (Vintage International). Today, the Caravelle’s bar endures as the most compelling perch in the city, though the panorama now consists of a mélange of LED billboards, construction cranes, and fledgling skyscrapers, as Ho Chi Minh City spruces up to become one of Southeast Asia’s most dynamic destinations.

To be sure, “Namstalgia” is one of the city’s abiding allures, as well as one of the Caravelle’s. The hotel opened with great fanfare on Christmas Eve in 1959, touting such modern amenities as Italian marble, bulletproof glass, a Berliet generator, and Trane air conditioners. After the Fall of Saigon in 1975, the Caravelle plummeted from its glamorous heights, but in 1998, a new 24-story tower rose as a complement to the recently refurbished landmark on Lam Son Square.

Today, the Caravelle’s amenities–a Japanese-style spa, a suite of restaurants, a tropical fruit bowl at check-in–fulfill expectations for an international five-star property, but its location on Lam Son Square sets it apart from any other hotel. Through the banks of windows in rooms on the Caravelle’s facade, you can glimpse the penthouse of a nearby apartment building that served as a helipad during the evacuation of Saigon; the salmon-colored towers of the 19th-century Notre Dame Cathedral; the now-tired Continental Hotel, once favored by war correspondents and novelist Graham Greene; the opulent Municipal Theater, which served as the legislative house of the government of South Vietnam; and the Givral Patisserie, where Greene’s Phuong stopped for her “elevenses” (mid-morning tea) in The Quiet American. The view also spans a good, long stretch of Dong Khoi Street, home to chic shops and boisterous echoes, for it was here, far below the Caravelle’s rooftop watering hole, that wild, wartime Saigon raged all night in bars now long gone.

LOCATION In Ho Chi Minh City’s first district, which is still officially known as Saigon. ACCOMMODATIONS The hotel’s 311 guest rooms and suites overlook downtown and/or the Saigon River. FACILITIES A ballroom, a boardroom, and other event spaces; an on-site casino; a salon and spa; and a tastefully landscaped seventh-floor pool area adjacent to a glass-walled fitness center. DINING A French chef presides over mostly Western fare at the misleadingly named Asian Reflections, which overlooks Lam Son Square. The ground-floor Port Orient restaurant serves a breakfast buffet (Western and Eastern cuisine) and casual meals. Pub food is on the lunch menu at the rooftop Saigon Saigon Bar. CONCIERGE RECOMMENDS Journey through Vietnam’s inimitable past, from prehistory through modern times, at the Museum of Ho Chi Minh City, a pearl-gray colonial palace built in the 1880s from a design by a French architect. RATES From $230 for a standard room to $345 for a premium room with views of Lam Son Square. Suites range from $380 to $1,200.