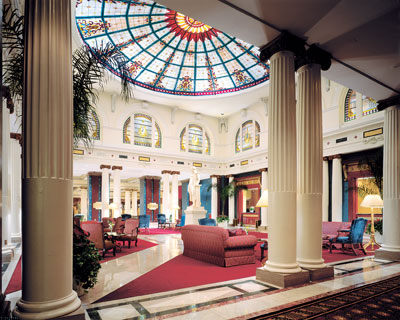 In the 1930s, white-gowned Southern belles made their debuts into society by descending into the Jefferson Hotel’s rotunda while suspended from wires overhead. Bill “Bojangles” Robinson was discovered as a tap dancer while waiting tables at the hotel’s restaurant. In the upper lobby, pet alligators swam in marble pools, greeting guests who, over the years, included 11 U.S. presidents. For a time, everyone who was anyone came to the Jefferson in Richmond, Va., and today, after the hotel’s extensive restoration, their modern equivalents should consider doing the same.

Built in 1895 by tobacco magnate Lewis Ginter, the Jefferson was a sprawling Beaux Arts—style structure with spires at either end and futuristic amenities–including a Teleseme, a precursor of the telephone, for room service–in between. But time and changing tastes took their toll on the hotel, and it closed in 1980. When it reopened six years later, the once proudly independent hotel was part of a middle-market chain. For Richmond businessmen William Goodwin Jr. and Beverley Armstrong, this was blasphemy, and so in 1991–with no experience in the hotel business–they bought the property and began investing millions to return its former luster.

Although the new owners updated the hotel’s amenities, the Jefferson owes much of its appeal to its history and the bold, oversize scale of its architecture. The centerpiece of the hotel, just as in 1895, is a life-size Carrara marble statue of Thomas Jefferson that stands in the upper lobby. Jefferson faces a thickly carpeted flight of stairs, which is alleged to be the model for the staircase in Gone With the Wind. The steps descend to the vast, sunken rotunda, where a 70-foot-high ceiling includes a skylight of Tiffany stained glass.

Some Jefferson guests and Richmond residents still hope for a return of the upper lobby’s alligators, the last of which, Old Pompey, died in 1948. At one point, one of Old Pompey’s predecessors escaped and crawled into the hotel’s library, where an elderly woman mistook it for a footstool. When the alligator moved beneath her feet, she screamed and ran for help, but the reptile had returned to its pond before staff arrived. Because the woman had been tippling sherry that afternoon (and had a reputation for doing so to excess), nobody believed her story. But they say she never drank sherry again.

LOCATION In the heart of Richmond’s downtown historic district, convenient to the Riverfront Canal Walk and the James River. ACCOMMODATIONS The 264 guest rooms and suites are decorated in 57 different styles, but each has high ceilings, tall windows, and custom-designed furnishings. The presidential suite’s second-floor marble balcony is an ideal spot for people-watching. FACILITIES A spa, health club, heated swimming pool, business center, florist, beauty salon, and 18 meeting rooms that range from 325 square feet to 4,556 square feet. DINING The fine-dining restaurant, Lemaire, serves excellent–and surprisingly eclectic–cuisine and has an inventive wine list. The unfortunately named TJ’s on the rotunda level offers more standard fare and also houses the hotel’s bar. CONCIERGE RECOMMENDS Go white-water rafting through the middle of Richmond on the James River, which has Class 4 rapids. (Class 5 is for professionals only, and Class 6 is not navigable.) Trips last as long as six hours and include the raft, vests, helmets, paddles, and the accompaniment of guides. RATES From $285 for a standard room to $395 for a junior suite and $1,800 for the presidential suite.