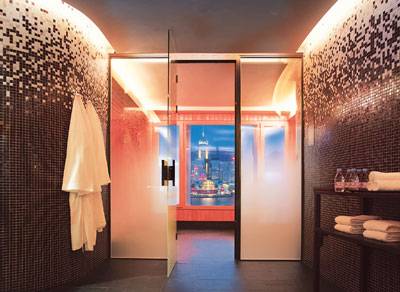 Every afternoon, live chamber music and the scents of jasmine and Darjeeling drift through the grand lobby of the Peninsula Hong Kong. Here, surrounded by boutiques and dwarfed by neoclassic columns topped with gargoyles, hotel guests and Hong Kong residents partake in what has become a favorite pastime at Peninsula properties worldwide: tea. The daily affair—which can last for as long as two hours and includes such British niceties as silver pots, scones, and cucumber finger sandwiches—originated in 1928, when the hotel first opened its doors and weekend tea socials with live bands and dancing cost 50 cents HK per person.

All such celebrations at the Peninsula ceased on Christmas night 1941, when Hong Kong’s British colonial governor formally surrendered to Japan in room 336. During their occupation, Japanese forces used the hotel as their headquarters, renaming it the Toa.

Both the British and the Peninsula reclaimed their prominent roles in Hong Kong society after the war, although the hotel, which reopened in 1946, has proved more durable than the colonizers. A large-scale renovation of the Peninsula in 1994—three years before Britain returned Hong Kong to China—involved the addition of a 30-story, 130-room tower; a heliport; a Philippe Starck–designed bar and disco; and an indoor swimming pool with a retractable glass screen that opens to views of Victoria Harbor and the Hong Kong skyline.

Earlier this year, the Peninsula opened a spa on the seventh and ninth floors of the tower. In addition to 14 massage rooms and two private spa suites, the 12,000-square-foot facility includes, appropriately, a tearoom where guests can enjoy pre- or post-treatment blends.

Location: Near Victoria Harbor, on the Kowloon side of Hong Kong.

Accommodations: The historic original building and the 30-story Peninsula Tower house a total of 300 guest rooms and suites. The 4,111-square-foot Peninsula Suite includes two sitting areas, a gym, a conference room, a private office, a full kitchen and butler’s pantry, and a balcony with views of Victoria Harbor.

Facilities: A heliport, more than 80 shops, an indoor pool with Victoria Harbor views, a 12,000-square-foot spa, and a business center with three private offices. dining The hotel’s nine restaurants and bars include Spring Moon, where Cantonese cuisine is served in an elegant 1920s-era setting, and Gaddi’s, Hong Kong’s best French restaurant.