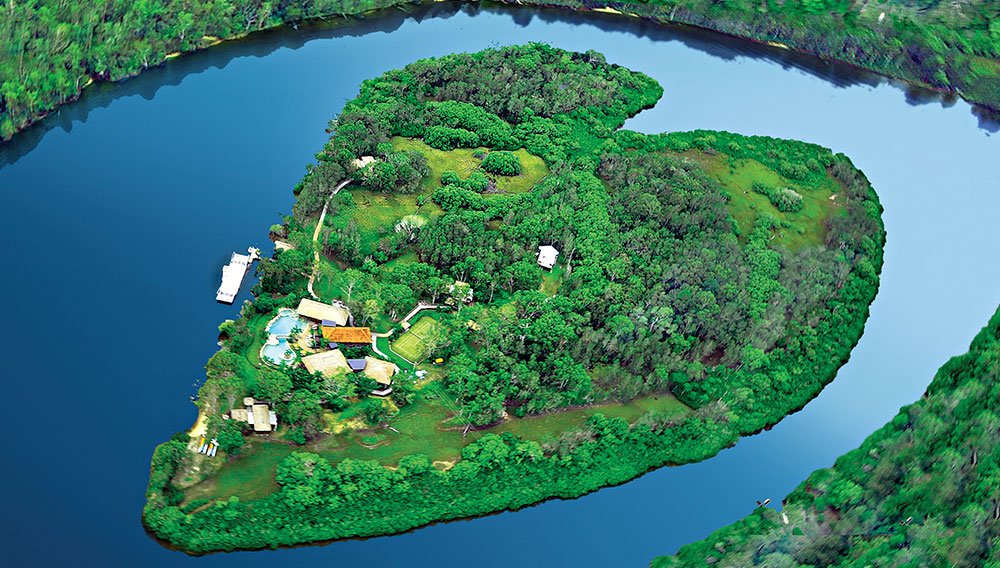 Hannah “Shotgun” Makepeace would not recognize her namesake today. After moving to Australia’s Noosa River region in 1924, the housekeeper-turned-proprietor of Makepeace Island became known for firing her shotgun twice into the warm Queensland sky to summon the local villagers, who would row their boats through the river’s mangroves and eucalyptus to see what she needed.

A 12-gauge alarm system is no longer necessary at Makepeace, especially since Sir Richard Branson and Brett Godfrey (former CEO of Virgin Australia) acquired the heart-shaped 25-acre island in 2003. Up went a grand Balinese retreat with thatch roofs, shining silks, and a lengthy lagoon pool. Now, as of July, groups of as many as 22 guests can make exclusive use of the island, including the three bure suites, the four-bedroom Bali House with its huge entertaining areas and cinema, and the party barge that chugs around the island with its bar and fire pit raging.

Though hedonistic—copies of the Kama Sutra lie beside each bed—Makepeace feels friendly and lived in, and cut off from the outside world. Civilization, however, is never too far away: At just a 10-minute boat ride from Noosa Marina, Makepeace is convenient to the beaches in the resort town of Noosa and diving and deep-sea fishing on the Great Barrier Reef.