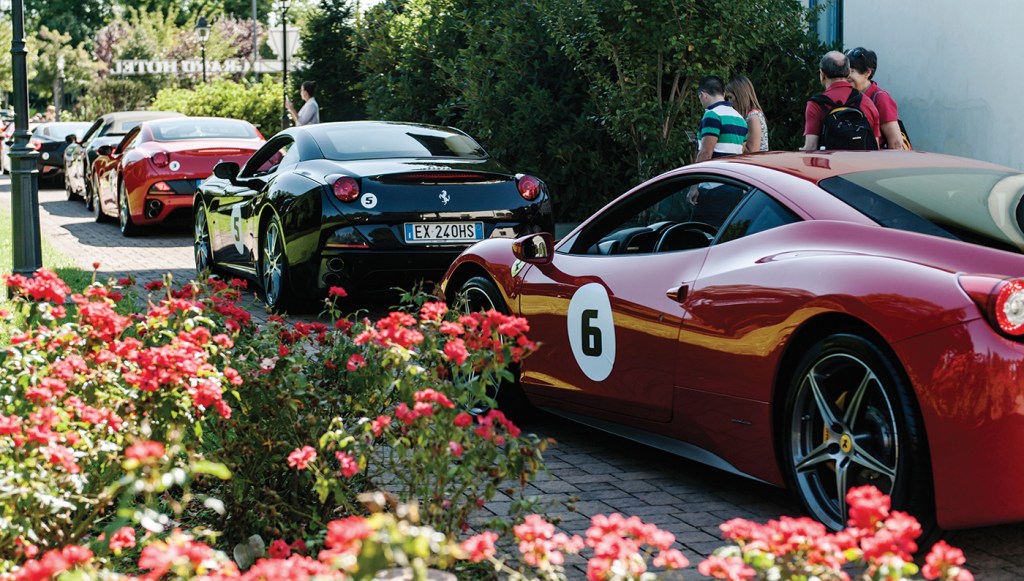 Italy wants not for luxuries. From its fashion to its food, the country has a reputation for fine craft and incredible attention to detail. The destination perennially tops vacation wish lists, including those of Robb Report’s VIPs.

Like an issue of Robb Report come to life, September’s nine-day Italian Road Rally kicked off as summer crowds waned and the ideal climate for alfresco evening meals peaked. The group of 12 couples, with vehicles from Ferrari, Lamborghini, Maserati, and McLaren all organized by the team at Ghisu Luxury Rent, set off with road maps from Milan to Rome. Between drives, they enjoyed private tours, showings, shopping sprees, and meals, many arranged by Italy’s top brands thanks to long-standing relationships with the magazine.

Before any car keys were handed over, attendees checked into the Four Seasons Hotel Milano, a 15th-century convent with 118 five-star accommodations among original frescoes and vaulted ceilings. Flagship stores by Fendi, Armani, and Prada surround the fashion capital’s prestigious address in the Quadrilatero d’Oro shopping district. The venerable Italian furniture maker Promemoria invited the group to a private apartment where a Michelin-starred chef prepared an elaborate meal paired with fine wines. Promemoria produces some of Italy’s most highly sought-after home furnishings, handcrafted in its Valmadrera factory outside Milan.

The next day, Dolce & Gabbana showcased its private palazzo and men’s couture collection, Alta Sartoria. A notch above the Milanese brand’s made-to-measure line, the offering allows customers to make any type of clothing request, which Dolce & Gabbana will design from scratch and vow never to make for anyone else. The iconic brand debuted its first ready-to-wear collection 30 years ago, always committing to quality and craft while maintaining a distinct, recognizable style.

The leather-goods expert Tod’s hosted breakfast the next morning at its lovely private Sartorial Club, followed by a look at—and a chance to purchase from—the Italian luxury house’s latest collections. Later that day, the family-owned premier shoemaker Fratelli Rossetti, founded in Milan in 1953, commissioned a master sommelier to oversee a wine tasting with the group and one of its artisans to explain the company’s unique hand-dying process.

With Milan in its rearview mirrors, the rally moved through Modena for lunch and private tours of Ferrari’s museum and Pagani’s factory. Another two hours on the road gave way to Florence, where the drivers pulled into the St. Regis’ private palazzo at sunset before a crowd of curious onlookers. Graced by a $100 million renovation in 2011, the 100-room hotel dates to 1432 and showcases hand-painted ceilings, frescoes, and Murano-glass chandeliers throughout. Across the river on the southern hills of the Arno, Stefano Ricci hosted an alfresco candlelit dinner at the Forte di Belvedere before panoramic city views. The perfection of the event reflected the quality for which the family-run company has become famous. The brand has grown since 1972 from a small Florentine tie maker to a leading name in menswear, accessories, fragrances, and home goods.

The following day, Stefano Ricci introduced the group to Antico Setificio Fiorentino, a silk mill founded in 1786 by noble Florentine families. Silks were a source of great wealth for such families then, and the factory still operates today on the original looms from the 18th century. Stefano Ricci acquired the mill in 2010, assuring its longevity, and launched a Royal Suite Collection home line showcasing the fine work of the atelier. In the evening, the Florentine luxury-goods company Salvatore Ferragamo greeted Robb Report‘s VIPs with Champagne in its restored palazzo. Salvatore’s son Leonardo Ferragamo, and eldest grandson, Diego di San Giuliano showed everyone through the company’s headquarters, including its shoe museum and exclusive boutique. Dinner followed at the family’s Hotel Lungarno. Overlooking the Arno River, the hotel’s restaurant Borgo San Jacopo has been awarded one Michelin star for its fine Tuscan cuisine. The next morning, Panerai secured extraordinary access to the Duomo di Firenze, Florence’s gothic cathedral dating to 1296. The Swiss watchmaker, responsible for maintaining the church’s Paolo Uccello Oro Italia clock, took the group on a private tour of the building, including portions of the rooftop not open to the public.  The vantage showcased sweeping views of Florence, where Panerai was founded in 1860. Abuzz from such a thrill, the guests migrated to the Four Seasons, where Panerai hosted lunch and showed off its stunning boutique at the hotel.

Back on the road after lunch, the group drove nearly two hours to Tuscany for three nights at Rosewood Castiglion del Bosco. With the picturesque, 800-year-old estate as their home base, everyone had time to slow down, book spa treatments, and take leisurely drives through the area’s winding back roads. The wineries of Tenuta Il Poggione and Frescobaldi’s Tenuta di Castelgiocondo hosted tastings and elaborate lunches during the stay. Il Poggione famously imported the first Brunello to the United States, and its 2010 Brunello di Montalcino won fourth place in Wine Spectator’s most recent annual top-100 rankings.

After a two-hour drive from Florence, Olga Urbani of Urbani Truffles welcomed the rally to Scheggino in Umbria, hosting a truffle hunt, tutorial on the company’s distinguished history, cooking demonstration, and truffle-infused lunch on the 166-year-old purveyor’s grounds and in its state-of-the-art test kitchen. Two more hours on the road brought everyone to Rome, where the road rally officially ended. With two nights still to explore the city, the VIPs checked into the stunning 96-room Hassler Roma—a legendary family-owned boutique hotel situated adjacent to the top of the Spanish Steps and features sweeping views of the Pantheon, Aventino Hill and the Borghese Gardens. It is the ideal location for the discerning traveler, and Robb Report reader, to discover The Eternal City. That night Bulgari welcomed the group to Italy’s capital by hosting a candlelit dinner in the historic Palazzo Montecitorio Ludovisi. The prince and princess Ludovisi, who live in the palace, personally showed everyone around, explained the history of their home and art collection (including the only known fresco by Caravaggio), and joined them in the spectacular dining room for dinner. Later, in Bulgari’s flagship store on the Via Condotti, the Domus exhibition gallery on the top floor showcased a collection of historic pieces by the brand. The luxury-goods company was founded in Rome in 1884, and its bold, architectural jewelry designs of the 1970s became instantly recognizable, featuring chunky metal links and colored stones. The company has since diversified to watches, perfumes, hotels, and more, and earned a global cult following in the process.

The Robb Report VIPs kicked off the final day of the trip with the fashion house Valentino, also located on the Via Condotti. Before opening the store to the public, representatives of the label poured coffee and took the group through its newest collection. A tour of Valentino Garavani’s home—the late-Renaissance Palazzo Gabrielli-Mignanelli—and the brand’s new couture collection followed. That afternoon, a behind-the-scenes tour of the Vatican was succeeded by a farewell dinner at the charming fine-dining restaurant Antica Pesa. Here the wow factor of the trip took hold, and the exclusiveness of many of the experiences began to sink in as guests exchanged their favorite moments of the nine days. To have seen so many wonders of the world away from the crowds, and to have names like Dolce & Gabbana, Ferragamo, Stefano Ricci, and more brought to life as not just fashion labels but multigenerational families operating among exquisite palazzos was truly incredible. The fine meals in such an array of settings, with wines at every turn, were talked about again and again. And that’s not even mentioning that, in true Robb Report fashion, having connected those dots with Ferraris and the like earned paramount bragging rights back home and memories not soon forgotten.

Robb Report wishes to thank the following companies for their support: