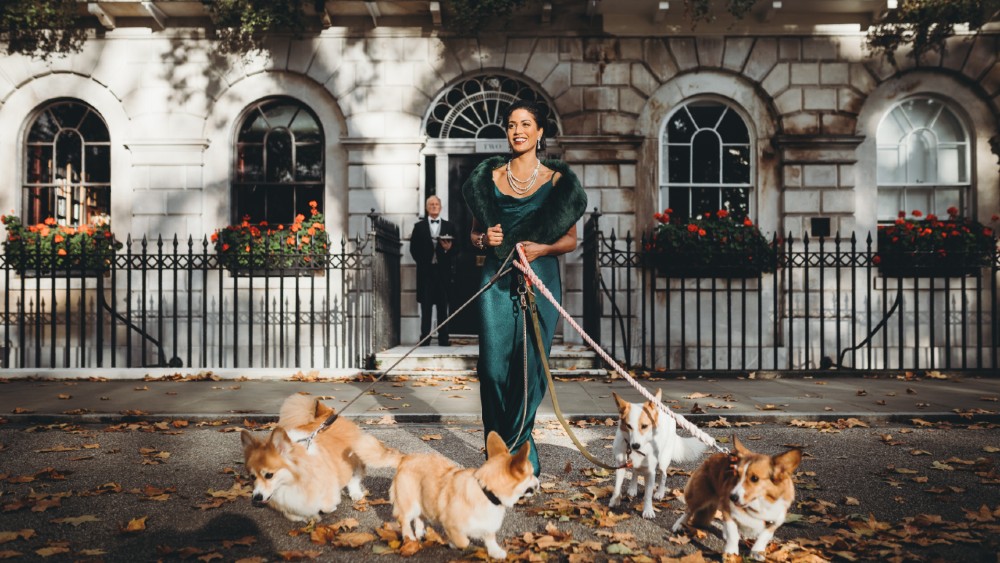 Season three of Netflix’s The Crown, which dropped on Sunday, heralds a new chapter for the small screen version of the British royal family, as they begin to navigate their roles in a rapidly changing world. But while the themes may be new, all the elements we love from previous seasons—namely, the glamorous fashions, glossy style, and stunning locations—are back in full effect. Now, one of those London filming locations is opening its doors for a limited time to allow the non-titled among us to live a Crown-like experience, complete with plenty of royal flourishes. Think etiquette coaching, personal butlers, cuddles with corgis and more—without the downside of palace intrigue.

Corgis will keep you company during afternoon tea  Photo: Courtesy of Plum Guide

Available exclusively through Plum Guide, a city homestay booking service that only accepts the top one-percent of residences, the Ultimate Royal-Worthy Staycation lets you unpack in the Earl of Fitzroy, a Grade-1 listed Georgian townhouse that was featured in season two of the show, and that’s set on a lovely, pedestrian-only square near Regent’s Park. For $64,000 a week (with a minimum of a one-week stay), you’ll enjoy all the home has to offer—including a library, gym, pool, sauna, and working fireplaces—as well as fun (and a bit tongue-in-cheek) activities designed to indulge your inner royal.

Wear tiaras and other jewels around the house  Photo: Courtesy of Plum Guide

Attended to by a personal butler, you (and up to 11 other guests) will get to brush up on your manners during a royal etiquette workshop with expert and social commentator, William Hanson, then put them to the test over a lavish banquet dinner and afternoon tea—the latter attended by a bunch of corgis (the Queen’s favorite dog) for some prime photo ops. A horse-and-carriage ride, a private tour of the Stately Rooms at Buckingham Palace, access to jewels to borrow, and a hamper full of treats from some of the Queen’s preferred brands round out the perks.

The $64,000-per week royal experience is available only during the month of December, for a minimum stay of one week; reservations will be taken until December 23. Find more information at Plum Guide. To book, contact lizzie.hardy@plumguide.com.