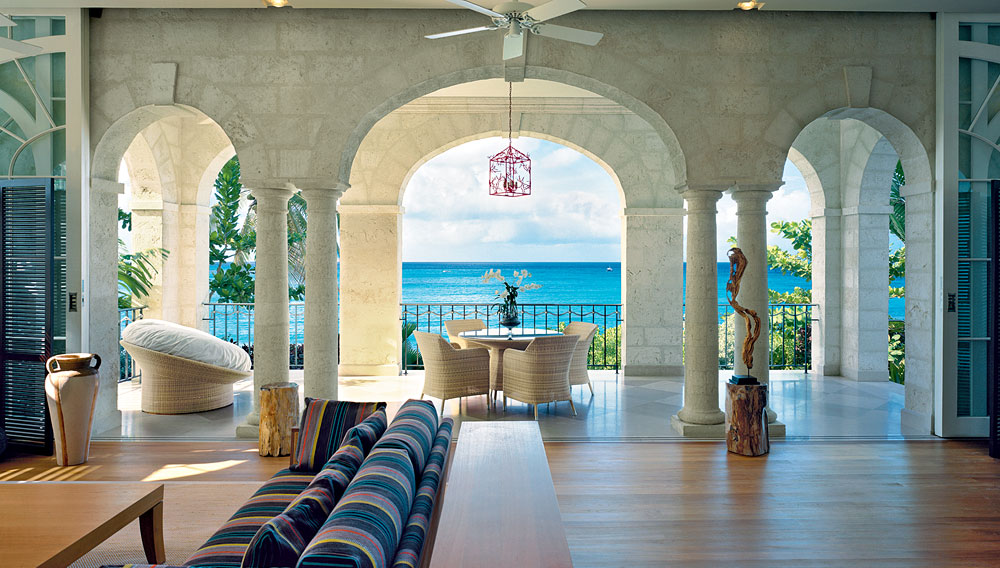 The easternmost island in the Lesser Antilles, Barbados—or “Little England,” as it is known—has long lured vacationers with its white-sand beaches, a vibrant cultural scene, and the legendary Sandy Lane hotel. Since 1961, this beach, golf, and spa resort has coddled its predominantly British clientele in a private-club-like atmosphere. Last fall, the resort took this club concept to an extreme, with the launch of one of the world’s most exclusive members-only enclaves.

Located a short walk down the beach from the hotel, One Sandy Lane is a commanding structure of roughly 100,000 square feet that houses just eight whole-ownership residences. The homes, which range in size from 8,147 square feet to 9,675 square feet, are priced from $21.8 to $24.6 million. “Buyers at this level want quality,” says Keith Rubenstein, founding partner of Somerset Partners, the property’s New York–based development partner. “And when they see quality, they’re willing to pay for it.”

Designed by Larry Warren, the Barbados-based architect who built the hotel, One Sandy Lane exudes quality. The massive edifice that houses the residences is constructed of Barbados’ indigenous coral stone. Its striking portico features an elegant marble staircase with a white-pewter-and-iron balustrade, designed by Les Ateliers Saint-Jacques of Paris, that spirals, like the striations on the inside of a seashell, toward an oval skylight. Other standout features include marble floors hand-cut and assembled in Italy by Bufalini Marmi; vaulted ceilings by EG Deco, of Monaco; and natural-pigment paint applied in layers by French artists with palette knives to create depth and tone. “When a buyer purchases a developer’s finish, they often have to customize it and spend additional time and money,” says Rubenstein. “But [One Sandy Lane] has the ultimate in finishes. Buyers just need to bring their furniture.”

Owners can work with their own decorator to furnish the residences, or hire Barbados-based Guillaume Menaud, whose design scheme—bamboo, ebony, and walnut for the cabinetry and doors; airy chandeliers and sconces that resemble branches of coral—graces the public spaces and for-sale residences.

Six of the eight villas at One Sandy Lane offer separate living quarters with terraces that connect to the main residences by outdoor walkways. All of the residences feature 12- to 14-foot ceilings; five en suite bedrooms; professional kitchens with Miele appliances and staff entrances; and views of the Caribbean, the beach, and the pool and gardens, which are landscaped with mahogany trees, star jasmine, and trumpet vines.

On-site amenities and services include a fitness center, a massage room, 24-hour concierge service, underground valet parking, a chauffeur, and discreet security combining biometric entry systems with video surveillance and around-the-clock guards. Owners, who pay annual maintenance fees of $14 per square foot on their homes, also have access to the spa, restaurants, and golf courses at the Sandy Lane hotel.

Rubenstein says that One Sandy Lane has piqued the curiosity of buyers from the United Kingdom and North America, but also from Brazil, Russia, and Spain. At press time, seven of the homes were still available for purchase.