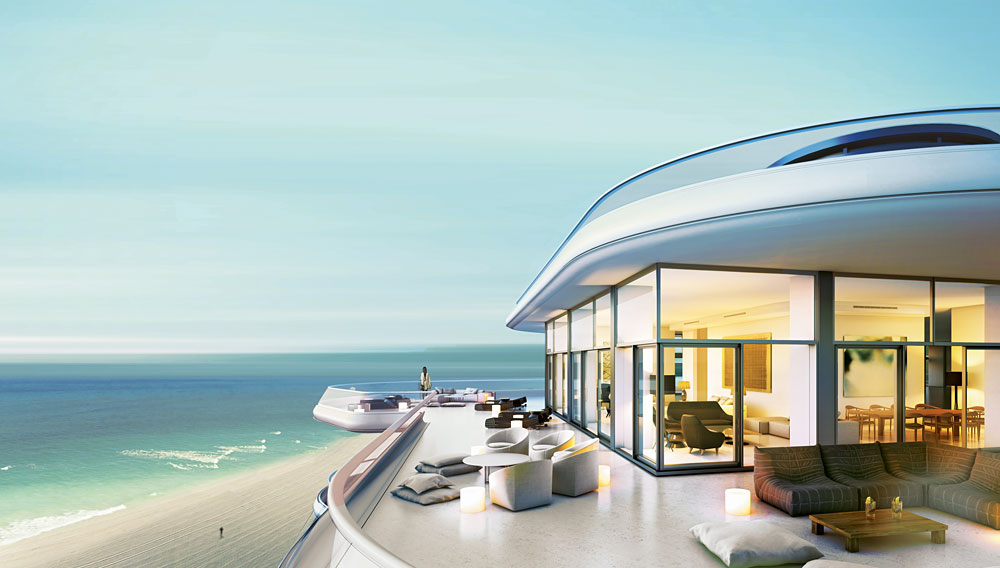 Miami Beach is known more for its flash than for its refinement. But the balmy beach city is in the midst of a cultural reawakening, fueled by premier art shows, world-class event venues, and new high-end restaurants and hotels. Next fall, the city will welcome its most ambitious luxury development yet: the $750 million Faena District Miami Beach, a five-block neighborhood created by some of the world’s leading designers—and home to Miami Beach’s most exclusive oceanfront condominiums.

Stretching from the Atlantic Ocean to Indian Creek, the Faena District will debut its first phase—the sleek 18-story Faena House residential tower—next fall on a wide stretch of beach. The Argentinean developer Alan Faena acquired the land for the tower in 2010, with an eye toward creating living spaces reminiscent of those in his native Buenos Aires. “I wanted to bring the spirit of Argentina, and the concept of living outside as well as inside, to Miami,” Faena says. “I wanted to offer a new mentality where you open your door and you wander in and out all day.”

To realize his vision for the tower, Faena enlisted the British architectural firm Foster+Partners to create an amorphous structure of glass and concrete overlooking the Atlantic Ocean. A modern response to Miami’s classic art-deco architecture, Faena House’s rounded edges appear to have been molded by the sea’s strong winds. Inside, the 47 condominiums are spacious and minimal. One- to four-bedroom units range from 1,307 to 6,400 square feet (priced from $2.5 million to $29 million) and feature custom collaborations by Foster and Partners with Molteni & C and Permasteelisa, respectively, for the kitchens and bathrooms. Additional designer details include Bianco San Carlo marble floors, Miele kitchen appliances, Duravit bathroom furnishings, and Foster+Partners lighting fixtures.

Central to Faena’s indoor-outdoor concept are the condominiums’ aleros, expansive terraces bordered by seamless glass railings that bring the sweeping city and ocean views inside. The development’s five-bedroom penthouse features a 360-degree alero, as well as a private elevator and a rooftop swimming pool with a kitchenette and cabana. The 18,253-square-foot unit—priced at $50 million—remains on the market, but more than half of Faena House’s 47 condos are already under contract.

Amenities and services at Faena House include a fitness center, a spa with a sauna and steam rooms, a lounge, a day-care center, a pool, underground valet parking, 24-hour concierge service and security, and a private beach club. Owners will also enjoy VIP access to the facilities and services of the Faena District at large. The neighborhood, which is scheduled for completion in 2015, will eventually be home to the Faena Saxony Hotel by the New York–based firm Roman and Williams, an arts center and park designed by the Dutch architect Rem Koolhaas, gardens by the landscape architect Raymond Jungles, and a marina on Indian Creek.

According to Faena, the neighborhood will usher in an unprecedented era of sophistication for Miami Beach. “We are building a new vision of art, culture, and architecture for the city,” he says. “Faena District will be the new postcard of Miami Beach.”