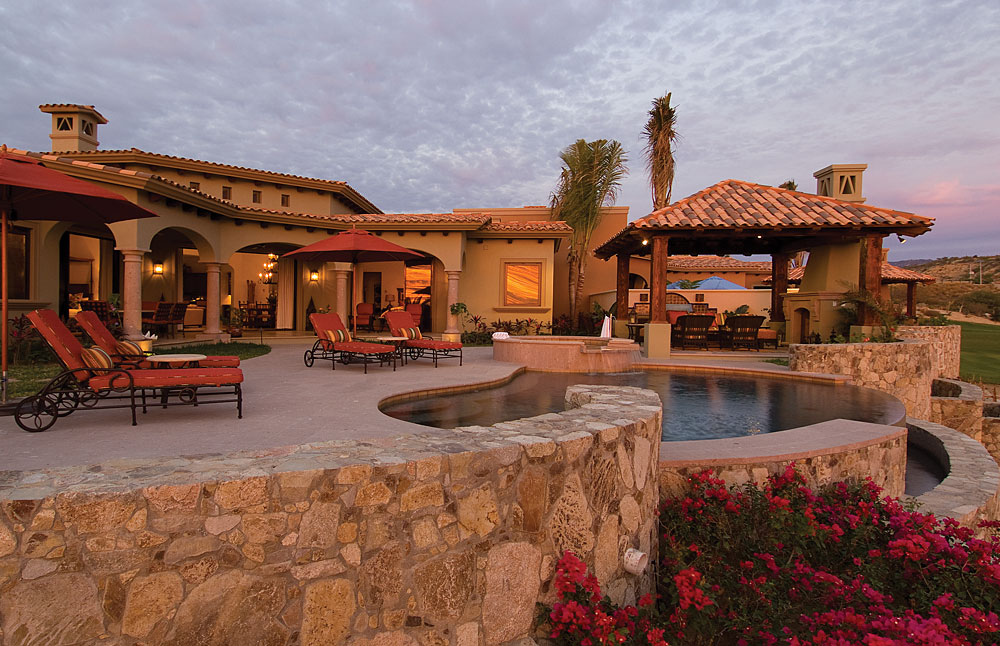 The pool terrace at Cielos Palmillas’ No. 77 sits just above the seventh fairway of the Ocean Course in Los Cabos, Mexico. Beyond the strip of grass and a palm-lined road, a sea of rooftops and stucco facades stretches nearly the length of a crescent beach. The clustered resorts and communities attest to the popularity of Los Cabos, the 20-mile corridor between the towns of San José del Cabo and Cabo San Lucas at the tip of the Baja peninsula. So, too, do No. 77 and the 15 other residences that compose Cielos Palmillas. “Cabo is so popular with our members that it made sense for us to build our first enclave here,” says Ben Addoms, cofounder and executive vice president of Quintess, the Leading Residences of the World, the destination club that owns Cielos Palmillas. “The weather’s always good, it’s easy for members to get to from all over the U.S., and it’s both family friendly and a great adult destination.”

Quintess, which added the Leading Residences tagline to its name after merging with its former rival in 2006, owns more than 70 homes in 31 locations throughout North America, the Caribbean, and Europe. Cielos Palmillas is the Broomfield, Colo., company’s first self-contained community for members, who pay a deposit (beginning at $240,000 for 20 nights per year) plus annual dues (from $18,750) for access to the club’s various residences. The Los Cabos community hosted its first members in January, when four of the 16 houses opened. (The remainder will open throughout this year.)

Cielos Palmillas is located within Villas del Mar, a larger community of $3 million to $7 million homes set on the steep hillsides above the One&Only Palmilla resort. Separated from the rest of Villas del Mar by a stone bridge, the four-bedroom Quintess residences follow the club’s strategy of building homes designed for family use. Each of the single-level, Mexican villa–style residences has two wings divided by a kitchen and great room, which opens to an expansive outdoor area with a hot tub and pool.

Quintess provides golf carts with the homes so members can navigate the steep roads to Villa del Mar’s private beach club and to the Palmilla’s spa, golf courses, and restaurants. In addition to the houses, Quintess is building a welcome center where some of Cielos Palmillas’ staff of 40 will arrange services that, says Addoms, are unique among destination clubs. “You’ll be able to have one of our limos take you around town, and we’re hiring our own chefs to cook breakfast and lunch for you at no additional charge,” he explains.

The expanded services at Cielos Palmillas—and the development itself—are the result of feedback that Quintess receives from members. Addoms cites as the impetus for Cielos Palmillas a recent survey in which more than half of the members ranked Los Cabos as their favorite of the club’s top-five destinations. Quintess has no firm plans to build communities in the other four—Napa Valley, Calif.; Deer Valley, Utah; Aspen, Colo.; and Manhattan—but Addoms does see more opportunities for multiple-home developments. “We’re looking at an island destination in the Caribbean; that’s probably going to be the next one,” he says. “We’re looking at a destination in Italy; we’re looking at Colorado. This isn’t going to be the model for all of our homes, but where it makes sense—where we can build them more efficiently and serve members more effectively—we’ll look at this enclave concept to give members a better experience.”