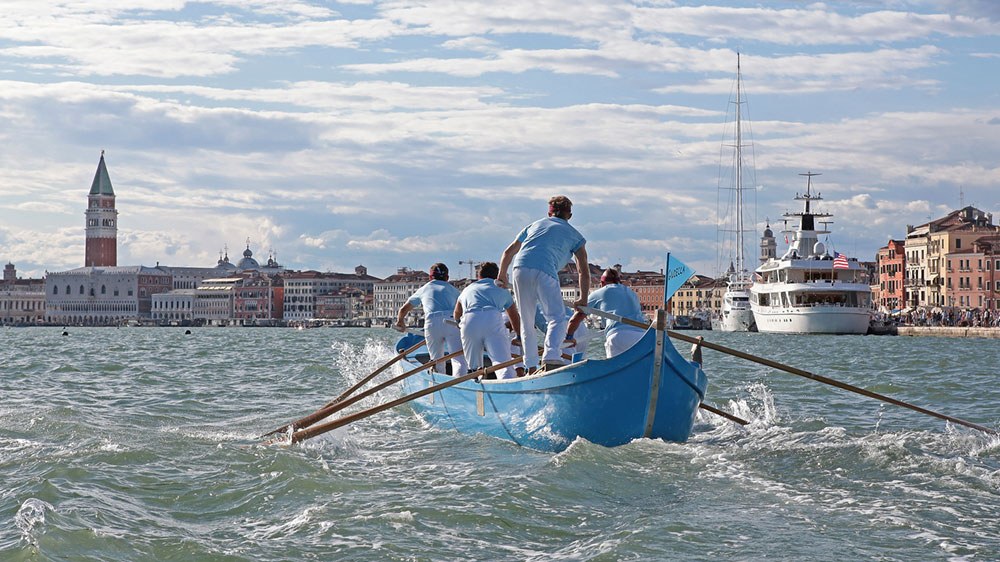 For a city so deeply rooted in history and traditions—from its 14th-century palazzi and Byzantine basilicas to its boats-only transport system—Venice is perennially popular with modern-day travelers. (So much so that over-tourism and a proposed “day visitor” tax geared towards cruise-ship passengers have become big topics of conversation.) But the crowds are particularly buzzing from late-spring to fall, thanks to high-profile annual events like the Venice Biennale and the Venice International Film Festival—plus, this year, the return of the Venice Boat Show. The warmer months also bring with them concerts and events, new hotel programming, celeb-chef-led food festivals and more. Here are some of the top reasons to visit the city on the Adriatic Sea in 2019.

When the first Venice Biennale took place in 1895, it was then-unheard-of to bring together so many of the world’s creative minds in one place. In the century-plus since, the annual event has grown to feature almost seven months of art and architecture exhibits, cultural performances, concerts, screenings and more at locations all around the city.

Curated by Ralph Rugoff, director of London’s Hayward Gallery, this year’s 58th International Art Exhibition (from May 11 to November 24) is entitled “May You Live in Interesting Times,” with participating artists showing works that reflect their interpretation of that saying. Among the hundreds of featured artists from around the world are several from countries that are participating for the very first time, including Madagascar, Ghana, Malaysia and the Dominican Republic.

Another Biennale must-see: American artist Melissa McGill’s Red Regatta, an installation of 50 traditional Italian sailboats scattered along the waterfront. Each of the boats will be hand-painted a different shade of red to represent the threat of rising sea levels to Venice. The installations will be on view from May to November, including during the four regattas taking place over the summer.

Speaking of the water, this year sees the return of the Venice Boat Show (from June 18 through 23), which will welcome Italian and international boating exhibitors and enthusiasts. Venice was once the seat of a powerful maritime empire, and the Boat Show will honor that tradition from its base at the historic Arsenal of Venice, set in the heart of what was once the shipyard of the Serenissima Republic. The event will showcase everything from the latest high-tech yachts to traditional wooden lagoon boats, and will include talks, events and special experiences—including the chance to visit the Enrico Dandolo Italian Navy submarine, which will re-open for the occasion. Cultural programming around the show will include a look at the importance of the sea in Venetian painting, talks on the shift from wood to iron usage in historic vessels, and a Lagoon fishing excursion. If the show leaves you wanting more, come back at the end of the summer for the annual Regatta Storica (Historic Regatta), taking place along the Grand Canal on September 1.

The Venice Boat Show  Photo: Courtesy of the Ferretti Group

The Biennale isn’t the only art game in town this summer. As part of the country-wide celebrations commemorating the 500th anniversary of Leonardo da Vinci’s death, the Accademia is exhibiting Vitruvian Man, the master’s iconic drawing of the human body. The priceless piece is normally hidden away in the museum’s vaults, but will now be shown to the public from April 19 through July 14, 2019.

At the Palazzo Ducale, take in an exhibition on 18th-century Venice through the eyes of the artist Canaletto (until June 9, 2019), or vist the Peggy Guggenheim Collection, which will mark the 40th anniversary of the art doyenne’s death with “Peggy Guggenheim: The Last Dogaressa” (September 21, 2019 through January 27, 2020), an exhibit examining the growth of her collection following her move to Venice in 1948.

Then there’s the launch of the city’s first permanent arts neighborhood. Officially debuting during the start of the Biennale, the Giudecca Art District will be home to 11 galleries, working artist studios, art-themed bars and restaurants, exhibition spaces and more.  (The district will also be a home base for some of the national pavilions during the Biennale.)

Founded by Venetian art directors Pier Paolo Scelsi and Valentina Gioia Levy, the new district will be inaugurated by a collective of female artists. To celebrate the launch, the Belmond Hotel Cipriani—which is also located on Giudecca island—will host a sculpture series by Uruguayan artist Pablo Atchugarry  (including pieces that were shown at the 50th annual Biennale) until the end of October.

In addition to the Cipriani, some of the top hotels in Venice are introducing exciting new programming for the summer season—many focused on cuisine. The Aman Venice recently launched Palazzo Kitchen Table, a dining venue set overlooking the 16th-century palazzo’s gardens. The intimate and idyllic spot—with room for just 10 diners, plus a state-of-the-art kitchen and a wine cellar stocked with rare vintages—will be available for private meals, and will host a series of themed dinners and culinary events led by world-renowned chefs. These “Cook the Lagoon” diners will highlight ingredients harvested from the Venetian islands and lagoons and sourced from local farmers, fishermen and market traders. Upcoming guest chefs include Teppan chef, Koji Aida (from Paris’s only Michelin-starred Japanese restaurant, Aida) and Davide Oldani of D’O, near Milan.

Over on the private Isola della Rose, the JW Marriott Venice has relaunched its signature fine-dining restaurant as Fiola at Dopolavoro Venezia under the direction of renowned chef Fabio Trabocchi. Putting a nostalgic twist on Venetian classics, the restaurant will use fresh market- and lagoon-sourced ingredients and olive oil made from the resort’s own groves. From September 26 through 29, Trabocchi will join other culinary luminaries like Giada De Laurentis, Jonathan Waxman, Angela Hartnett and others for the second annual Gather Venice food and wine festival, which this year will include mindfulness experiences alongside cooking demos, wine tastings and exclusive dinners.

Finally, joining the Venetian hotel landscape this year is The St. Regis Venice, slated to open in July. The luxury brand’s third hotel in Italy will be set right on the Grand Canal, spread throughout five 18th- and 19th-century palazzi. Despite the historic setting, the interiors promise to feature a contemporary flair, and will showcase views of several of the city’s top landmarks.

One of the challenges of visiting Venice is navigating past the packed tourist areas and popular activities to access more authentic and local experiences. Luckily, some of our favorite travel companies can help unlock the culture of the city. Available as part of both multi-city itineraries and as individual experiences, Red Savannah’s Venice summer activities include a visit to one of the last remaining gondola yards in the city, followed by a rowing lesson with a Venetian gondolier, and private evenings in St. Marks Basilica—where the priest will guide you on a rare visit to the crypts—and the Doge’s Palace, which you can have all to yourself for 90 minutes.

Meanwhile, Discover Your Italy helps shine a spotlight on Venice’s rich food traditions—specifically, its role in the birth of the aperitivo. The Rowing & Tasting experiences gets you out onto the Cannaregio canals and behind the oars of a gondola, then takes you to the some of the best bàcari—local bars famous for their cicchetti snacks. The Venice Aperitivo Experience delves deep into the city’s history as the birthplace of the Spritz and Bellini. You’ll start with a glass of the latter at the rooftop terrace of the Rem Koolhaus–designed Fondaco dei Tedeschi luxury shopping center, then hit a few small neighborhood wine bars. It all culminates at a bar on the Grand Canal, where you’ll sample four types of Spritz cockatails while toasting the sunset over this one-of-a-kind city.