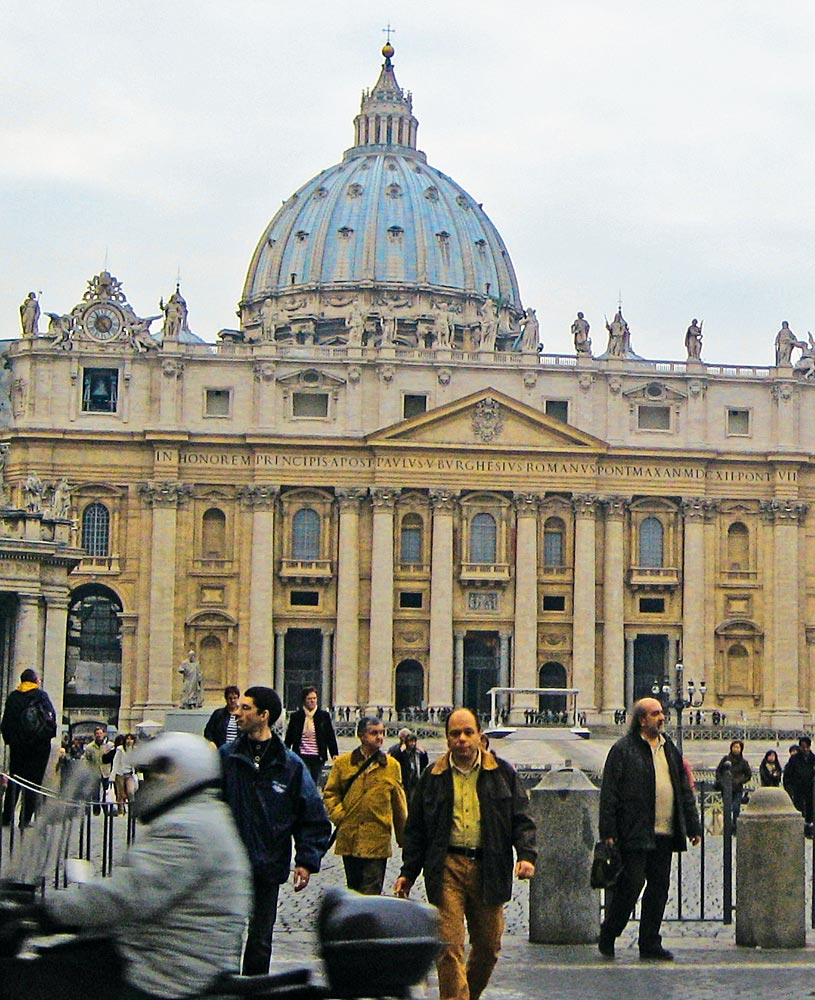 Surrounded by olive trees and grapevines at the open-air trattoria in Vetralla, 40 miles north of Rome, we had eaten Lallo Piergentili’s aged cheeses, cured meats, and pappardelle with wild boar. Now he walked with us from his restaurant to the parking lot, carrying a tin of his own olive oil. “This is a gift,” he said. “But first, can I take a picture?” My wife, Paula, and I stepped out of the way while Lallo focused his cell phone’s camera on our car, a white 1964 Lancia Flaminia Superleggera convertible, with a body by Carrozzeria Touring. “I hope you’ll come back,” he said, grinning and resting his hand on the door, as if to prevent us from leaving and continuing our journey north.

I have made the 300-mile trek between Rome and Milan many times and by various means. On the autostrada, the ride takes five and a half hours, without espresso stops. A train ride, during which the espresso is delivered to your seat, is an hour quicker. A plane flight is only 65 minutes. But last fall, Paula and I made the trip in a novel way, in the Lancia and two other antique Italian cars, wending past medieval castles, farmlands, vineyards, hilltop villages, and chestnut forests. We completed the route in four days—after spending two days in Rome—and savored every minute.

Italy by Vintage Car, a Massachusetts company with operations in Rome, orchestrated the drive. The business launched in August, and its first full season of operation will begin in mid-April and run through October. Through its relationships with antique-car rental agencies and private collectors, the company has access to Alfa Romeos, Fiats, and Lancias made from the 1950s to the early ’70s, including many convertibles. Vintage Car offers trips of various routes and lengths, and they include stays at some of Italy’s top hotels. This fall, the company also will begin offering trips through Tuscany and Emilia-Romagna, during which you will be able to drive antique Ferrari sports cars on roads and antique racecars on tracks.

The Lancia Flaminia, in which we started our trip, is named for the circa third-century BC road that connects Rome to Rimini. (Through the 1960s, Lancia had a custom of naming its cars after ancient Roman roads.) The car is one of just 847 Flaminia convertibles that Lancia produced from 1962 to 1964, and it is an heir of the 1950s Aurelia, in which Lancia introduced its first V-6 engine. It is a powerful car and, at 15 feet long, a stately one.

The Lancia and other vehicles in Vintage Car’s stable do not come with seat belts, airbags, or power steering. However, you can expect to be given the right-of-way at all intersections, because the Italian drivers will want to watch you pass.

Aula and I began our tour in Rome, at the 12-room Villa Spalletti Trivelli, located across from the Palazzo Quirinale, where Italy’s president lives. Before receiving the Lancia, we toured the city on chauffeur-driven antique Vespas provided by Vintage Car. Our plan was to stick to back roads throughout the trip, but first we wanted to explore the Appian Way, the road built by the Romans in the fourth century BC that is considered the world’s first highway. We zipped past the ruins of the Terme di Caracalla, following the road’s great stone blocks, under the branches of cypresses and pines. I had toured Rome many times before, and this was the best way to see the city.

I also have battled Rome traffic before, so I was glad to pick up the Lancia the following day in Cerveteri, a sixth-century BC Etruscan necropolis that is located approximately 45 minutes outside the city. There, in a parking lot, I received a quick driving lesson, as all Vintage Car clients do. I also took advantage of some practice time, during which I worked the clutch and stick shift and dodged a few tour buses.

At the parking lot, we met Marco Bernardini, a 6-foot-3, antique-car racer and mechanic from Florence. He would trail us from a distance during our drive, and each night he would check the tires and engine, fill the tank, and wash and polish the car. He also would transport our luggage in his van and carry spare parts. Jumping out of the van with a cigarette in his mouth and a screwdriver in his hand, Marco would work miracles in the event of problems, such as when the Lancia became boxed in at the bottom of a hill. For me, Marco’s presence was reassuring, and Paula also appreciated having him around. “I like him even better than the cars,” she declared.

It did not take us too long to get used to the Lancia or its hum. We headed north through Lazio, past the walled city of Tuscania, where ours was hardly the oldest vehicle on the road: We passed one of the townsfolk piloting a cart pulled by a donkey. With the Lancia’s top down, I could look through, around, or over the windshield and see the Italian countryside all around us. There were roads for going slowly, curves for having fun, straightaways for letting it all out, and steep slopes for admiring the scenery. And on all of the roads, other cars were scarce.

We rounded Lake Bolsena, the largest volcanic lake in Europe, and pulled into Bagnoregio as night was arriving. More than 50 years ago, the town served as the main location for Federico Fellini’s La Strada, the Oscar winner in 1957 for best foreign language film. Today Bagnoregio is better known as a hulking village set on a crumbling cliff that each year becomes smaller. The town also is home to the Piero Taruffi Museum and its collection of rare and stunning antique cars, which I would have been embarrassed to visit if I had not parked alongside the building in my own rare and stunning antique. My favorites in the collection were the Flaminia’s older cousins: a sky blue 1955 Lancia Aurelia B12, and a 1939 Lancia Aprilia cabriolet that belonged to the museum’s director and was just a few shades creamier than a wedding dress.

After driving into Umbria and lodging at La Badia, a hotel outside the town of Orvieto that was built in the sixth century as an abbey, we spent the next morning visiting Orvieto’s main piazza and its duomo. To get there, we had to thread the Lancia through narrow streets up a thousand-foot cliff. Men with newspapers tucked under their arms and women pushing baby carriages watched as we parked. “I’m in love with your car!” one man told me. “It’s not mine,” I admitted. He looked crestfallen, and I realized I had broken an unspoken rule. “OK, it is!” I said. His smile returned, while his wife and mine shook their heads.

From Umbria, we continued north, following the ancient Via Cassia into Tuscany. Entering Val d’Orcia—a UNESCO World Heritage Site that inspired so many Renaissance landscape painters—we drove past undulating hills, olive groves, castles, and fields of wheat (as much as half of Italy’s pasta comes from this region’s semolina). We continued past the spa town of Bagno Vignoni, where the central piazza is a massive pool of 123-degree water. In Montalcino, we stretched our legs at Casato Prime Donne, owned by a scion of the dei Barbi clan, but we enjoyed only a few tastes of the winery’s Brunello because we still had driving to do. Finally, we stopped for the night in Siena, where our hotel was a former palace built in the 17th century for Pope Alexander VII’s niece. The hotel was located across from the headquarters of the Monte dei Paschi di Siena, the world’s oldest bank. At dinner, we drank more Brunello, after reluctantly bidding a ciao bella to the Lancia.

Italy by vintage car allows you to switch vehicles during a trip, and by the next morning Marco already had loaded the Lancia onto his trailer and brought us a blue 1966 Alfa Romeo 1600 Spider Duetto Osso di Seppia. Driving her on Tuscany’s Strada Statale 222—better known as the Chiantigiana—I felt as though I had broken up with my longtime girlfriend and replaced her with the first head-turner I met. The Alfa was lithe and light at just 2,400 pounds, and with its top down, we tore past castles, farmhouses, vineyards, and orchards of prickly pears. The name Osso di Seppia is Italian for “cuttlefish bone” and refers to the long, rounded shape of the car’s tail. Designed by Pininfarina, this car was the same type that Dustin Hoffman drove in The Graduate, except that his was red.

Our own red car arrived the following day, after we spent the night at the recently opened Four Seasons Hotel Firenze, which occupies a 15th-century palazzo and has the city’s largest private garden, as well as frescoes and bas-reliefs wherever you look. Marco brought us a 1958 Fiat Abarth 750 Zagato Double Bubble Coupe, a tiny 4-cylinder sports car that Turin-based Abarth & C. had souped up until it could reach 100 mph. Fiat built just 600 of these cars, from 1956 to 1960. Because the car’s body was so small, Zagato included the double bubble bulges in the roof to accommodate the driver’s and passenger’s heads. In both 1956 and 1957, Fiat Abarths won Italy’s Gran Turismo.

We continued north from Florence across the Apennines, over the Passo della Futa and Passo della Raticosa, following the routes of the Mille Miglia road rally and the Giro d’Italia cycling race as we left Tuscany and entered Emilia-Romagna. Marco warned me that the Abarth liked its rpms to soar, and she purred each time the needle broke the 4,000 mark. The driving portion of our tour ended that night in Bologna, and the following day a chauffeured car brought us to the Stanguellini car museum in Modena, where 10 red racecars flanked a black crank Fiat Tipo O from 1908; it was the first car registered in Modena. Stanguellini became the region’s first sports car maker—preceding Maserati, Ferrari, Lamborghini, and Pagani—and its workshop became known as the Court of Miracles.

After driving through Italy’s back roads in antique cars, we finally had reached the source of all Italian sports cars. But impressive as the Stanguellini roadsters were, and as much as I enjoyed the company of Italy by Vintage Car’s Alfa and Fiat, none of those stirred me the way that first one, the Lancia, did. What’s a guy to do?

When we reached Milan, I took my wife to dinner.