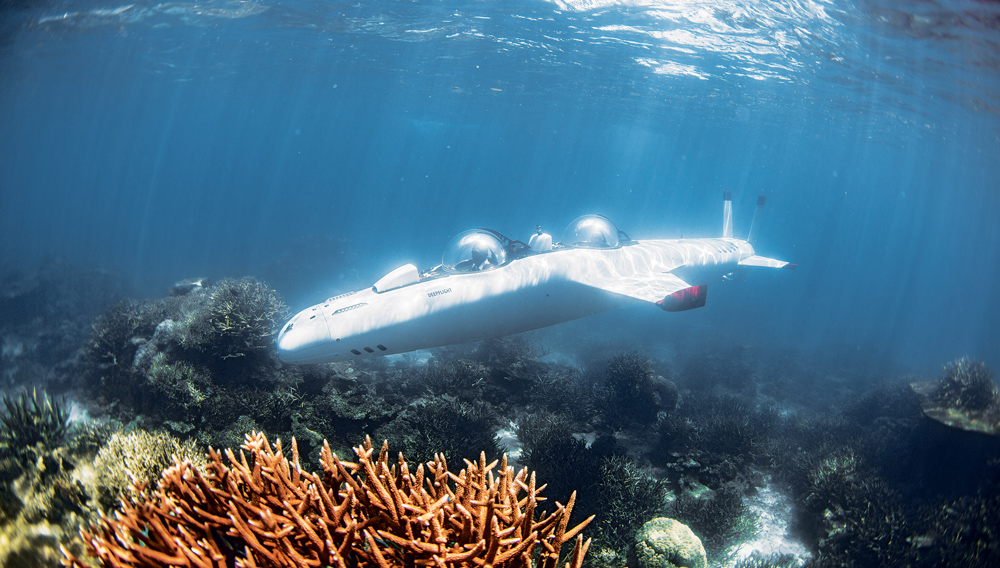 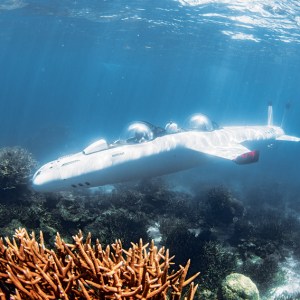 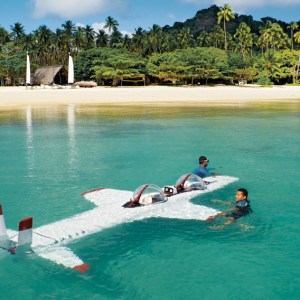 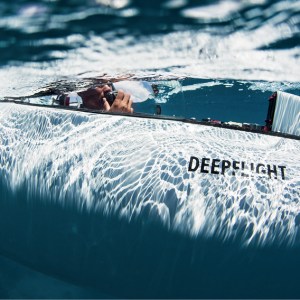 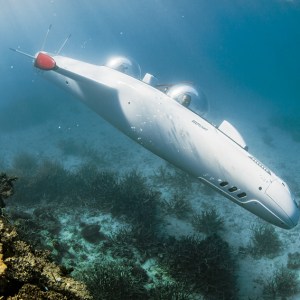 Graham Hawkes has been stalked by a great white shark 100 miles off the coast of Mexico and felt no fear. He has laughed giddily while submerged upside down 300 feet below the surface of Monterey Bay. From the inky-blue depths of Lake Tahoe he has sped toward the clouds in the sky above to feel the thrill of a breach. All of these experiences were enabled by the Super Falcon, the winged submersible that the British-born U.S. engineer launched in 2009 after decades of designing and building the craft to, as he describes it, fly underwater.

Hawkes’s company, DeepFlight, has built three examples of the $1.7 million, 22-foot-long Super Falcon. One belongs to the technology-industry venture capitalist Tom Perkins, and Hawkes sold the example that he used as a showroom model to a Turkish yacht owner. The third Super Falcon was delivered last June to Laucala, a private-island resort in Fiji that was named to the Robb Report 100, our list of the world’s top 100 resorts. Guests of Laucala now have access to the vessel and the unique experiences that Hawkes designed it to deliver.

“With the Super Falcon, you’re able to explore reefs and marine life in a way that you can’t with anything else,” says Hawkes. “Because of its ability to cover distance and maneuver with such agility, you can experience things underwater that no one has before.” Hawkes visited Laucala last summer with his wife, Karen (who handles the marketing for DeepFlight), and some of his staff to teach the resort’s dive-center team how to maintain and operate the sub. While on the island, Hawkes also trained the resort’s owner, the Red Bull cofounder Dietrich Mateschitz, and his son. Mateschitz is an aircraft pilot and therefore quickly mastered the Super Falcon’s fly-by-wire controls. “The operating principles of the Falcon are identical to an aircraft, with a few minor deviations,” says Hawkes.

Hawkes describes how Perkins recently spent three years exploring the South Pacific with his Super Falcon, which he would launch from his 120-foot expedition yacht Dr. No. He tells about the time that Perkins was swarmed by dolphins while submerged in the vessel, and how, on another occasion, he glided far beneath the water’s surface alongside a pod of humpback whales, enjoying a 360-degree, crystal-clear view of them from under one of the acrylic dome canopies that cover the Super Falcon’s two tandem seats. “[Perkins] is the first human to move with humpback whales in deep water,” says Hawkes, noting that the craft operates in virtual silence. It is propelled by zero-emissions electric-powered thrusters that can operate for as long as six hours on a single charge.

Unlike most submersibles, the Super Falcon is not equipped with headlights. “A sub with headlights is capable of putting a million times more light in that environment than ever existed before,” explains Hawkes. “We’re seeing big sharks, whales, and other animals, and if we had blazing headlights or made too much noise, they’d get the heck out of there.”

The Super Falcon is designed to dive deeper underwater when thrust is applied and to rise to the surface when not under power, making it fail-safe in the event of a malfunction, according to Hawkes. He also notes that any malfunction would be a first for the Super Falcon; he and his team have continually tried—and failed—to break the sub during test runs.

The Super Falcon, which can dive as deep as 400 feet, is incredibly agile. At speeds as fast as 6 knots, it can pitch and roll and travel while inverted. It can dive nose down or shoot straight up for a surface breach. Hawkes fondly recalls testing the sub in Lake Tahoe and performing what he calls a Tahoe Tumble. During the maneuver, the Super Falcon made a leaping nose-up breach, tumbled backward to the surface, and then quickly flipped right side up. Performing such feats in the sub while secured with its five-point seatbelts feels something like riding an underwater roller coaster. Of course, the Super Falcon also can steadily troll underwater to provide an unrivaled vantage of marine life.

The azure waters surrounding Laucala are ideal for the Super Falcon. The area is home to some 1,500 species of fish and 400 species of coral, including several varieties of pink coral that are found only in Fiji. Since the resort began offering underwater tours in the sub, most guests have taken at least one ride, sitting in the backseat while one of the resort’s pilots operated the vessel from the front seat. Guests have reported seeing multiple sea turtles, sharks, and stingrays, and countless tropical fish and coral species.

Laucala initially charged $2,000 for a ride in the Falcon, which typically lasts 45 minutes to one hour, but a ride is now folded into the resort’s all-inclusive rates, which start at $4,600 per person per night and include all meals, beverages, and activities. Two waterproof high-definition GoPro video cameras are mounted to the outside of the sub; one looks out at the marine life and one looks in through the canopy at the passenger to capture his or her reactions. Upon request, Laucala will send guests home with a USB flash drive containing the GoPro video files, and the cockpit is spacious enough for passengers to capture their own photographic keepsakes—or snap underwater selfies.

Laucala is located about 10 miles northwest of Fiji’s Taveuni island and covers roughly 3,200 acres, the vast majority of which is untouched tropical rain forest. The smallest of the resort’s 25 stand-alone one- to three-bedroom villas offers more than 16,000 square feet of indoor and outdoor space. The villas are located over water, on the beach, on a coconut plantation, and on the island’s ocean-view cliffs. Each has a private infinity pool. The Hilltop Residence ($40,000 per night), an estate within the resort, sits atop one of the island’s tallest peaks, some 800 feet above the water, and affords stunning views of the surrounding ocean. Malcolm Forbes, the island’s former owner, is buried on the grounds of the residence. (Mateschitz acquired the island in 2003.)

Though the resort rarely operates at full guest capacity, it employs a year-round staff of more than 300 people (mostly native Fijians) to maintain the island, which is largely self-sustaining, thanks to its livestock farms and fruit, vegetable, and herb gardens. The staff members demonstrate the perfect balance of attentiveness and respect for privacy, and guests can be as social or secluded as they like. As they stroll through the scenic grounds or ride in the golf carts—on their way to one of five dining venues, the spa and wellness center, the 18-hole David McLay Kidd golf course, or the myriad beach and water activities—guests are met with a cheerful “bula,” the Fijian word meaning “life” that is used as a greeting and blessing.

This South Pacific paradise already offered guests a unique vacation experience. Now it has an amenity that is one of a kind. Guests can join an exclusive club that previously included only billionaire adventurers and DeepFlight test pilots by taking an underwater flight in the Super Falcon and experiencing all the wonders it affords.