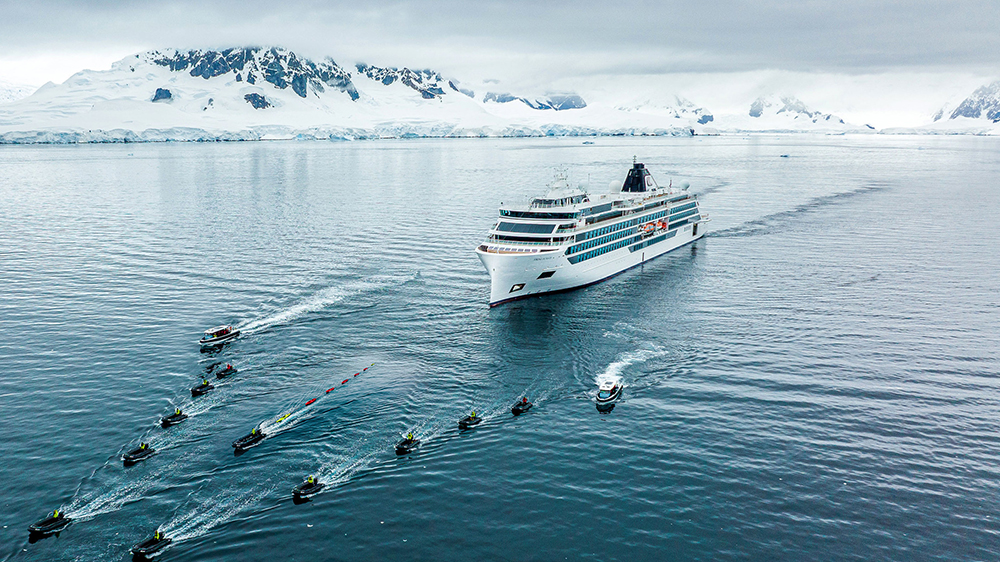 Viking Cruises is ready to take you and its boats further than ever before.

The company, which turns 25 this year, has begun branching out into the world of expedition cruises. The latest addition to the Viking fleet may be more rugged than the company’s river, lake an cean liners, but it’s still jam-packed with all the amenities people expect from the brand.

The boat tasked with venturing to some of the world’s most far-flung locales is the Viking Octantis, which is currently out on its first Antarctic season. It’s a 665-foot purpose-built expedition ship with an ice-strengthened Polar Class hull and fin stabilizers to help it navigate some of the world’s most punishing waters. The Viking Octanis and its sister ship, the Viking Polaris, were both designed with expedition voyages in mind, unlike the rest of the company’s roster of vessels.

A suite onboard the “Viking Octanis”  Viking

As tough and capable as the new ship may be, it’s still home to all the features you expect from a luxury cruise. It can carry up to 378 guests in its 189 staterooms, which range in size from 215 to 1,223 square feet and are outfitted with king-size beds, large private bathroom with heated floors, TV, Wi-Fi and a balcony that offers a stunning view of your polar surroundings.

Few people go on a cruise just to spend time in their room, though, so there’s also a spa, terrace, dome-covered pool, library and several dining and drinking options to while away the time. And, because it’s designed for expedition cruises, there are both wet and dry laboratory facilities if you’d like to carry out a science experiment or two.

The highlight of the interior, though, is the Aula, the ship’s auditorium featuring panoramic ocean views and a design inspired by the ceremonial hall at the University of Oslo where the Nobel Peace Prize is awarded. The space will host lectures and entertainment programming throughout your voyage. Viking calls the room the “world’s most advanced venue for learning at sea.” Thanks to the Aula, you won’t just have a good time, you might learn something too.

“The Viking Octantis and her sister ship, the Viking Polaris, have been designed for discovery—to enable our guests to explore the world’s most pristine destinations in comfort and in the most responsible way possible,” said Torstein Hagen, the cruise line’s chairman, said in a statement. “With our first Antarctic season underway, we are very pleased with the enthusiastic initial response from our guests, as well as from esteemed design experts.”

If the thought of an expedition cruise speaks to you, you can book your room on the Viking Octantis now; rates start at $13,995 per person. It’s currently on its first Antarctic season but we imagine there will be plenty more voyages to come.

Check out more photos from onboard the Viking Octanis below: