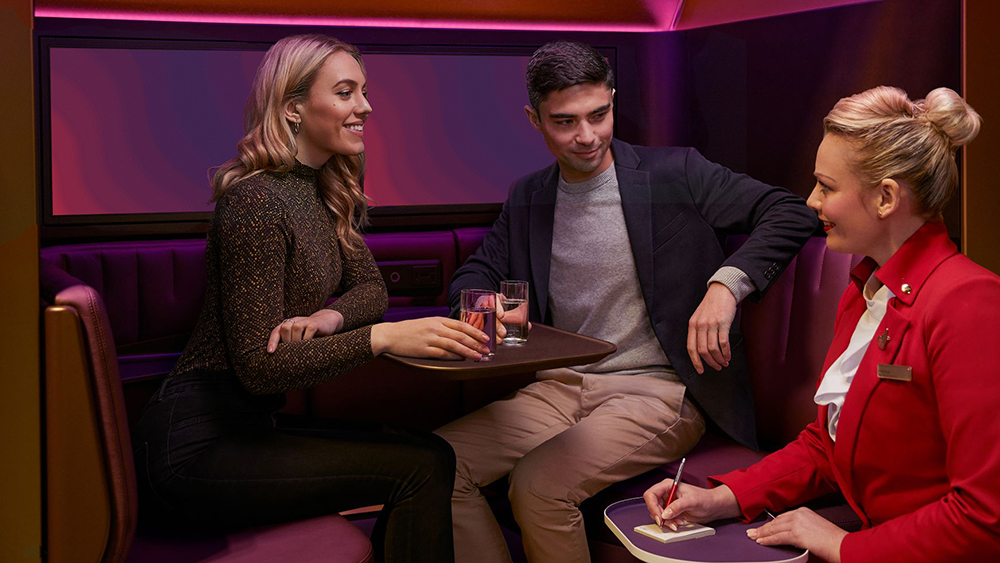 Virgin Atlantic is taking a hallmark of the cocktail bar to the skies.

The British airline has just announced that its newest Airbus A350 aircraft, which are slated to arrive later this year, will come equipped with an exclusive new social space for well-heeled jet setters called “the Booth.”

As its moniker implies, the cozy lounge is similar to one that you would find in a swanky speakeasy, and it has been designed to give travelers a place to unwind during flight. Located in the Upper Class cabin (Virgin’s version of business class), away from the regular seats, the intimate corner is comprised of a plush leather banquette for two and a single leaf table upon which you can enjoy a couple of drinks.

The Booth also sports a pair of 25-inch touchscreens and two Bluetooth audio jacks that will give passengers an opportunity to enjoy a range of immersive experiences. The content displayed on the monitors will be continuously updated and tailored to the route. You might take a deep dive into a digital gallery featuring up-and-coming artists on one trip and watch the aircraft’s tail cam on the next.

The cozy booth gives travelers a place to unwind during their flight.  Virgin Atlantic

“We’re famous for our onboard social spaces and the introduction of the Booth elevates the customer proposition for our leisure travelers to new heights,” Virgin Atlantic’s chief customer and operations officer, Corneel Koster, said in a statement. “I’m delighted that we’ve curated the Booth specifically for our customers jetting off on holiday to our sunny destinations, such as Orlando, offering a truly stylish start to their trips.”

In addition to the Booth, the new A350s will feature 16 Upper Class suites with a revised design that includes a window-facing seat with a 44-inch pitch, a fully flat 82-inch bed and the largest entertainment screen available on any Virgin aircraft.

Named in honor of Sir Richard Branson’s late mother, the first plane in the new A350 leisure fleet, Fearless Lady, is scheduled to take off in December 2021. It will travel between London’s Heathrow and Florida’s Orlando International Airport, giving those on board plenty of time to get acquainted with the Booth.