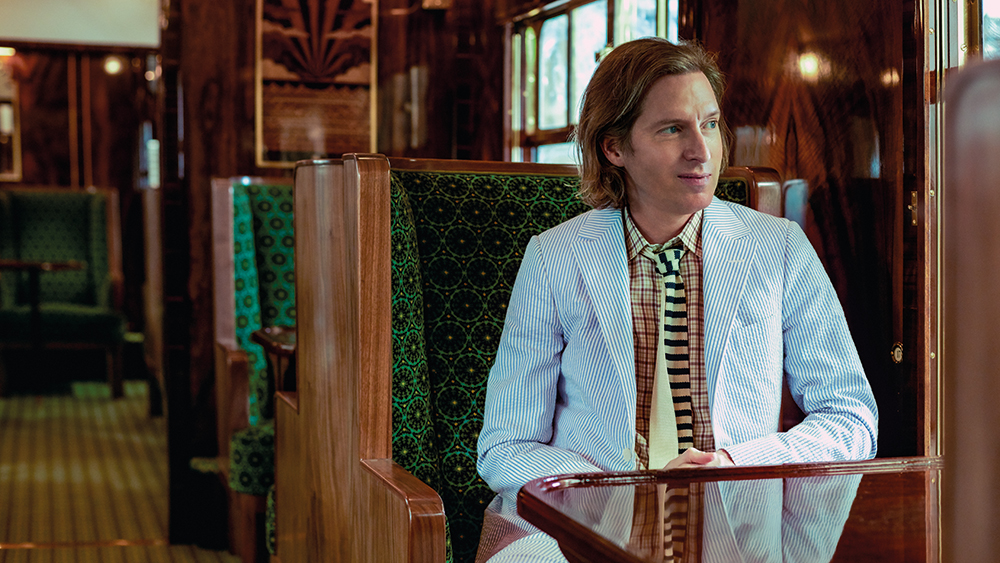 Whether he’s evoking the innocence of childhood in movies like Rushmore and Moonrise Kingdom or celebrating the Golden Age of travel in The Darjeeling Limited and The Grand Budapest Hotel, filmmaker Wes Anderson has parlayed a sense of nostalgia and a skill for diorama-like details into a celebrated oeuvre. So it only makes sense that he’s joined forces with travel brand Belmond—operators of famous trains like the Venice-Simplon Orient-Express and the Belmond Hotel Cipriani in Venice—to marry those two elements in one luxurious new offering. Beginning on October 13, British Pullman, A Belmond Train, England will feature a carriage that has been reimagined by the director himself.

“I love trains! I have often had the chance to invent train compartments and carriages in my movies, so I was immediately pleased to say ‘yes’ to this real life opportunity,” Anderson said in a statement about the project. He added that he was both “very eager to make something new while also participating in the process of preservation which accompanies all the classic Belmond train projects. They are keeping something special alive, igniting this endangered species of travel into a new golden era.”

The carriage in question here is Cygnus, which debuted in 1951 as a First Class parlor car for the Golden Arrow; later, it was also used as part of Sir Winston Churchill’s funeral train. Cygnus continued to serve as a dependable workhorse for the British rail system over the decades, until Belmond pulled it from its place on the British Pullman and sent it off to France for this total refurbishment.

For the new design, Anderson (whose new film The French Dispatch comes out on October 22) sought inspiration from the carriage’s 1950s origins, and also wove in some of the symmetrical lines, art nouveau style and dreamy color palettes often found in his work. As Cygnus was named for a Greek god of balance who is often represented by a white swan, Anderson also placed references to that myth throughout; look for the intricate waves and swan details in the handcrafted marquetry and bespoke chairs, the shimmery silver leaf on the ceiling (which reflects like water) and the swan shaped Champagne coolers.

Anderson also helped select some of the dishes and glassware.  Photo: Courtesy of British Pullman, A Belmond Train, England

As the British Pullman is used for day trips around the UK, its historic carriages mainly feature open seating plans, with elegant tables at which travelers can enjoy their gourmet meals as the English countryside flies by outside. The revamped Cygnus will offer both the table-style seating and two private coupés, which hold four passengers each. Travelers can book the open-car experience, dubbed Pullman Dining by Wes Anderson, or the private Pullman Coupe by Wes Anderson. (The entire carriage can also be privatized for up to 26 people; pricing available upon request.)

The woodwork and silver leaf detailing in the coupe.  Photo: Courtesy of British Pullman, A Belmond Train, England

In the Pullman Dining by Wes Anderson option, you’ll enjoy a similar experience to what’s offered in the train’s other carriages—round-trip transport, multi-course meals, white-glove service, limited Champagne and wine—but with seats reserved in the Cygnus carriage. Things get taken up a notch in the Pullman Coupe by Wes Anderson option, which includes seating (for up to four) in the private coupe; private check-in and priority boarding at London’s Victoria Station; free-flowing Veuve Clicquot; and exclusive menus with additional courses, cocktails and upgraded wines, all served using tableware and glassware selected by Anderson. Coupe travelers will also enjoy a guided tour of the train with the Train Manager and go home with a gift box of two Champagne glasses.

Both Wes Anderson packages are available on all of the train’s journeys, which include day trips from London to Cardiff, Agatha Christie-style murder mystery lunches, rides to historic Bath in the south of England, Christmas-themed trips and more. Check out the available itineraries here; you’ll find the option to select the Wes Anderson experiences once you click through to the booking page. Pullman Dining by Wes Anderson starts at approximately $546 (£400) per person; Pullman Coupe by Wes Anderson starts at approximately $2,457 (£1,800) per coupe.