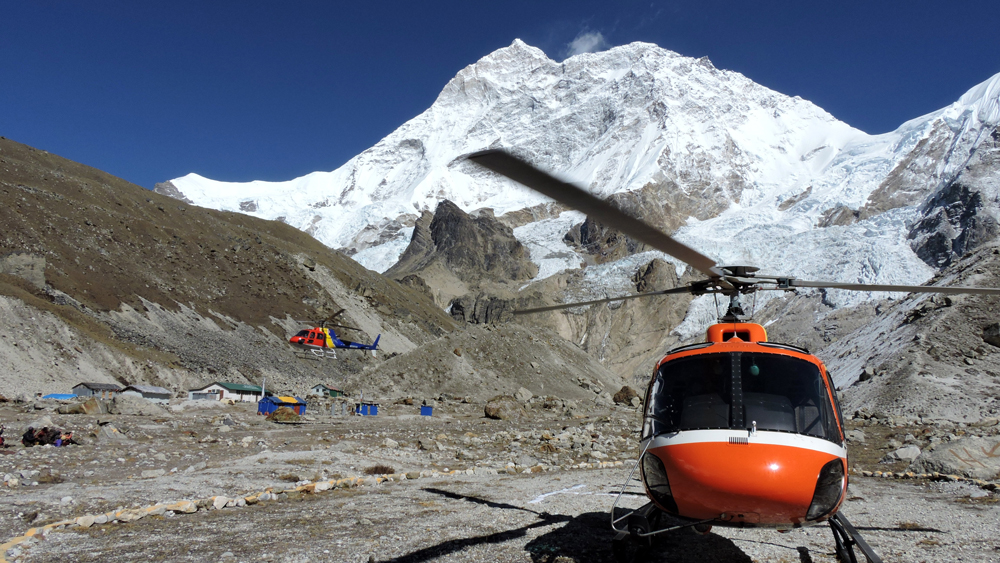 Jack Wheeler might be the world’s most adventurous man. The seasoned world traveler and owner of Wheeler Expeditions became the youngest person to summit the Matterhorn at age of 14, and has visited the North Pole 21 times. This spring, the risk-taking roisterer will share the spotlight on his next daring expedition, bringing eight intrepid guests with him on his Himalaya Helicopter Expedition, an 8-day trip that will explore eight of the planet’s “eight-thousanders” (peaks over 8,000 meters, or 26,250 feet). When it comes to daring helicopter tours, this one may just top them all.

On April 28, eight guests will board a pair of AS350 B3 helicopters (the kind used in high altitude rescues) and fly from Kathmandu to Everest Base Camp, located 19,000 feet above sea level. This is the first stop in a weeklong tour that sails over and touches down on some of the region’s most breathtaking sites—among them, Everest’s Western Cwm and stunning southwest face, and Scoundrel’s Viewpoint in Nepal’s Gokyo Valley. Advanced mountaineers typically trek for weeks in sub-zero temperatures to see these destinations—but Wheeler and his team will swoop down from the sky instead.

In addition to Base Camp, Wheeler—who has successfully executed the Himalaya Helicopter Expedition four times already—will then take clients to seven more of Nepal’s highest peaks: Lhotse, Cho Oyu, Makalu, Kanchenjunga, Manaslu, Annapurna, and Dhaulagiri. The expedition will touch down in Tengboche for yak butter tea with Tibetan monks, Lake Tilicho for a glimpse of the electric-blue waters of the world’s highest lake, and the isolated Nepalese Kingdom of Lo. In-between stops, adventurers will stay in simple but comfortable accommodations in the region, including Kathmandu’s Yak & Yeti hotel and Everest Summit Lodge in Pangboche.

The Himalaya Helictopter Expedition is priced at $22,500 per person, excluding international flights. Due to the high altitude, guests will be equipped with portable oxygen tanks, and time on the ground at each outlook will be limited. Cameras wil be encouraged, but—be warned—photos are not likely to capture the true colossal beauty of these high-flying destinations. “The mark of a real adventure is [that] you can’t truly understand it unless you experience it,” says Wheeler. “It’s beyond words—beyond description.”