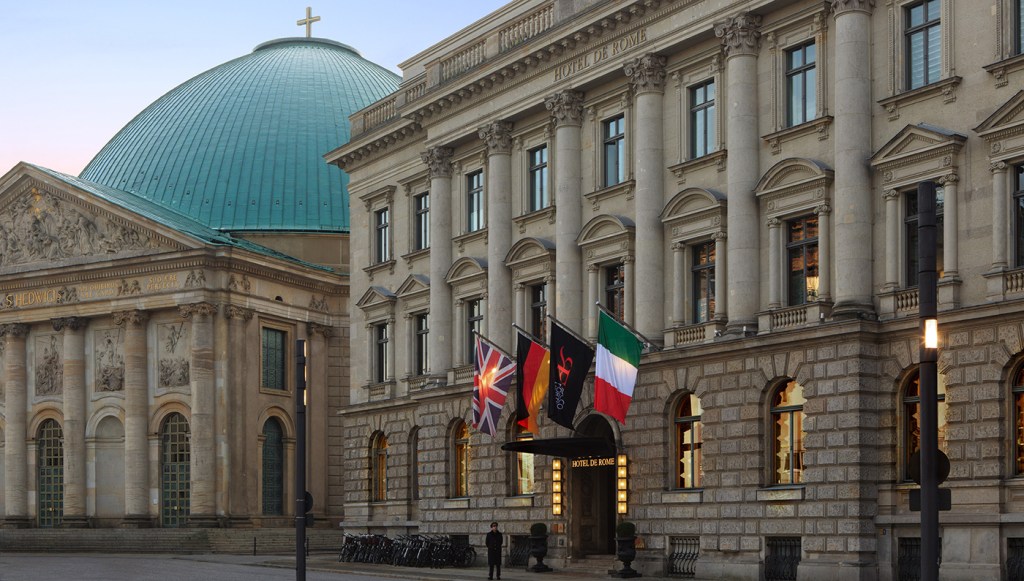 With their commanding neoclassical architecture, vast expanses of marble, and lofty ceilings, banks possess the kind of grandeur that hotels often aspire to. It’s no wonder then that some of the grandest financial institutions in the world have found new life as luxury hotels, with ornate cashier’s halls becoming ballrooms, safety deposit boxes serving as ceiling art, and old vaults repurposed as spas and pools. From Philadelphia to Istanbul, these 10 hotels set in former banks provide guests with a richly storied experience unlike any other.

Rocco Forte’s Hotel de Rome takes full advantage of its historic setting within Berlin’s circa-1889 Dresdner Bank headquarters. The bank’s former lobby is now an opulent lounge serving afternoon tea; the vault is home to a six-treatment-room spa; and the cashier’s hall is a grand ballroom with a mosaic floor featuring the names of the bank’s four main offices in Dresden, Bremen, London, and Berlin. While most guestrooms are contemporary and elegant, four historical suites come with many a period detail, including leather-clad doors, parquet floors, oak and mahogany wood paneling, and—in the case of the Gutmann Suite—shrapnel damage from World War II. (roccofortehotels.com)

Richard Branson’s first city hotel is set within the Old Dearborn Bank Building, an art deco landmark constructed in 1928. Guests check in to the Virgin Hotel Chicago at a vintage cigar stand before heading past the brand’s signature cherry red grand staircase to original brass-embossed elevators. Nods to the structure’s history can be found throughout, including a banking hall turned posh bar where interior design firm Rockwell Group has painstakingly restored an ornamental coffered ceiling. Of course, Branson has infused plenty of his own quirky and modern tastes, from the Shag Room—named for its funky shag carpet—to Lucy, the hotel’s app that can alter your room’s temperature and make restaurant recommendations. Now if only she could make a bank deposit for you, too. (virginhotels.com)

The 1922 Renaissance Revival building that the Langham, Boston calls home once housed the Federal Reserve Bank of Boston. The bank’s former president’s office—spectacularly adorned with 20-foot gilded ceilings and two original murals by the painter N.C. Wyeth—has been revived as the Wyeth Room, a dramatic space for private functions. And the Bond bar, featuring original 25-foot vaulted ceilings and ornate chandeliers, comes with a few not-so-subtle nods to the past, with silkscreens of world currencies on the walls and an original Federal Reserve Bank seal etched into the floor. Guest rooms, meanwhile, offer spectacular views of the Boston skyline and, fittingly, the Financial District. (langhamhotels.com)

The former Midland Bank headquarters was completed in 1924 in a mishmash of architectural styles that borrowed from inspirations both near (neighboring St. Paul’s Cathedral and the Bank of England) and far (the domes of India). Opened in April, the Ned—named for the structure’s architect, Sir Edwin “Ned” Lutyens—has embraced the historic design hodgepodge in which it resides. One of the bank’s former domes houses a bar, while the vault has been converted into a private club. The hotel’s nine restaurants are cleverly separated by walnut banking counters; a steakhouse is even set within the wood-paneled office that once belonged to Midland’s bank manager. Appropriately, the 252 guest rooms and suites were inspired by the glamour of the 1920s, with plush club chairs and palm-tree-shaped chandeliers. Of course, the two-bedroom Lutyens Suite is the grandest of all, with a private bar, dining area, and rooftop. (thened.com)

Originally built as the Girard Trust Company, the neoclassical building that the Ritz-Carlton, Philadelphia inhabits is a reproduction of the Pantheon in Rome. In a nod to its origins, the hotel is designed in the colors of precious metals and currency, with accents of metallic, bronze, and green. Located on the Avenue of the Arts, the hotel also features an art collection that celebrates the street’s prominence as the cultural center for art, music, and theater. Guest rooms are elegant, decorated in a reserved palette of grays and tans. Several come with stunning views of another Philadelphia landmark: iconic City Hall, topped with a 27-ton statue of the city’s founder William Penn. (ritzcarlton.com)

Overlooking Vienna’s oldest square, the stunning Park Hyatt Vienna occupies a 100-year-old structure that once served as the headquarters for Bank Austria. The hotel’s centerpiece, the Bank Brasserie & Bar, is set under an alabaster ceiling supported by massive marble columns in the Art Nouveau–style former cashier hall. There, the menu offers such currency-inspired cocktails as the U.S. Dollar (a dubious combination of bourbon and barbecue sauce) and the Euro (a nothing-if-not-diverse blend of red wine, dark beer liquor, rosemary syrup, and wormwood). (park.hyatt.com)

Located on Barcelona’s elegant Passeig de Gràcia, the modernist structure built for Banco Hispano Americo in the 1950s is today home to the Mandarin Oriental, Barcelona. Sporting sleek interiors by the Spanish designer Patricia Urquiola, the hotel has been contemporized with minimalist guestrooms and floor-to-ceiling windows (many of which overlook the neighboring Gaudí masterpiece Casa Batlló). The Mandarin’s pièce de résistance, however, is its stunning Banker’s Bar, featuring a ceiling lined with the bank’s original safety deposit boxes, complete with keys. The bar’s most popular cocktail is the Bankers#3, a rum-infused concoction with tonka beans, cacao, Amontillado syrup, grapefruit, and yuzu. Downstairs, in the old bank vault, guests can steal a bit of R&R at the eight-treatment-room spa and lap pool. (mandarinoriental.com)

Vault Karaköy isn’t just a clever name. The 63-room hotel, fittingly set on Bankalar Caddesi (“the Avenue of Banks”) in Istanbul’s trendy waterfront Karaköy neighborhood, claims as its home the 19th-century Renaissance Revival building that once belonged to Credit General Ottoman. The hotel’s design team restored the structure’s intricately stenciled 16-foot ceilings, marble staircase, and original wrought-iron elevator. The circular Gold Bar is located within one of the former safes, and the wine cellar is housed in the former vault, complete with a 2-foot-thick steel door and turning wheel. By contrast, the guestrooms are sleek, and most feature high ceilings, green marble bathrooms, and million-dollar views over the Bosphorus. (househotels.com)

Situated near the Palais Garnier opera house, this belle époque Parisian landmark opens onto a small foyer draped with rich ruby curtains, a fitting prelude to the show-stopping lobby of the Hotel Banke. Here, a glass-domed rotunda is surrounded by majestic burgundy, marble columns—and golden bank counters. In the Lolabar, gilded bull heads—a reference to a favorable stock market, perhaps?—line the walls. The guestrooms, meanwhile, are eclectically decorated in a contemporary style with original crown molding and, in some cases, carved marble fireplaces. The hotel also features an impressive art collection that includes Egyptian, African, and pre-Columbian art and jewelry. (hotelbanke.com)

Appropriately located in the Financial District, the JW Marriott Chicago occupies the first 12 floors of the former Continental & Commercial National Bank Building, a Classical Revival skyscraper designed by the legendary American architect Daniel Burnham in 1912. The hotel’s regal lobby is punctuated by marble Corinthian columns topped with gold capitals, elaborate glass chandeliers, and twin cascading wrought-iron and brass staircases. The 6,000-square-foot Burnham Ballroom, the hotel’s most impressive space, is set beneath a painted glass vaulted ceiling from which are hung 10 hand-blown crystal chandeliers. Each of the 610 guest rooms features 10-foot ceilings and marble bathrooms. The spa’s Clarity Chamber, with its fireplace and heated stone benches and floors, is Marriott’s take on the traditional hammam. (marriott.com)