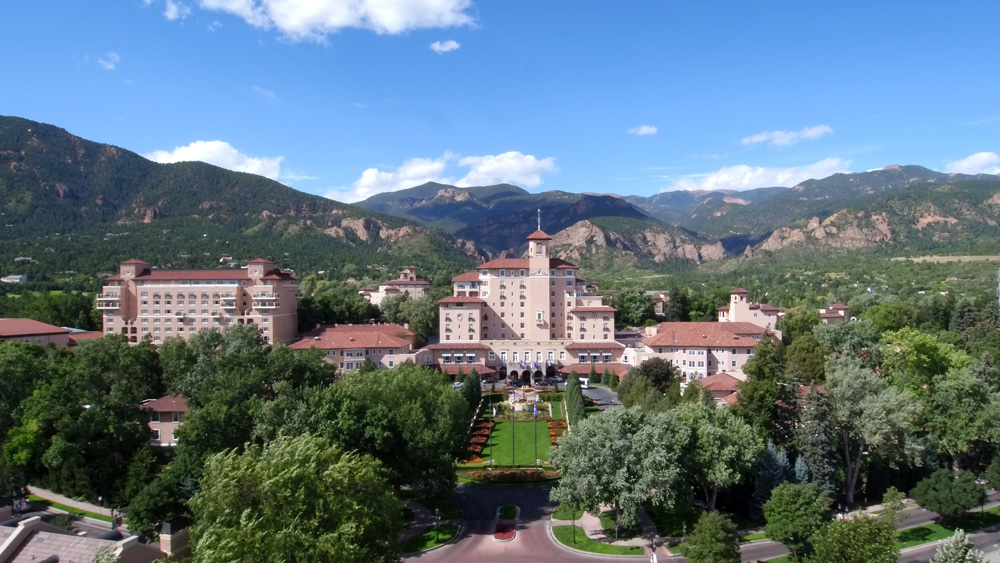 This year, Colorado’s legendary Broadmoor resort turned 100 years old. Beloved for its pink Italian Renaissance facade, the grande dame is perhaps the most storied hotel in all of American history—one where some of the last century’s biggest names have stayed and played.

In fact, the fabled estate’s past reads much like it was ripped from the pages of The Great Gatsby, thanks in large part to Spencer Penrose, the hotel’s eccentric former owner who was known for creating a scene wherever he went. Here, we take a look back on 100 years of myths and memories at the Broadmoor, from secret Prohibition booze stashes to elephant caddies on the golf green.

Penrose and the Elephant Caddie

Spencer Penrose had a well-known affection for animals—so much so that he regularly brought wild animals to roam freely around the Broadmoor. During the 1920s, the hotel resembled something of a zoological kingdom. Exotic animals were everywhere. Flamingos, monkeys, and seals held court on the West Terrace, grazing for food among the dining room tables. At night, coyotes could often be heard howling from the not-too-distant grounds. And legend has it that if you played a round of golf, you might have glimpsed Penrose with his wild caddie: a 45-year-old retired circus elephant named Tessie. Rumor has it, Tessie even caddied for heavyweight champion boxer Jack Dempsey.

An elephant on the hotel grounds  Photo: Courtesy the Broadmoor

By the 1950s, the animal menagerie had reached chaotic new levels. At one point, Penrose acquired two new seals in a last-ditch effort to control the Broadmoor lake’s overpopulation of exotic fish. Eventually, Penrose’s wife, Julie, asked her husband to move the resort’s wildlife off-property, which resulted in the creation of the Cheyenne Mountain Zoo.

Today, the Broadmoor’s bar pays homage to Penrose’s wild escapades with a mural that depicts a monkey playing with a golf ball. (Look a bit closer, however, and you’ll notice that the ball is actually Penrose’s glass eye—the hotelier is said to have lost his real eye in a boating accident.)

Over the years, the Broadmoor hosted its fair share of powerful men, from Dwight Eisenhower—who was a regular on the resort’s golf course—to George W. Bush, who famously gave up drinking after a bender at the wood-paneled gastropub Golden Bee.

Actor John Wayne was also a regular at the resort—so much so that he clearly felt at home. In one famous tale, the actor stepped onto the elevator to find a waiter delivering a tray of shrimp to a guest’s room. But a famished Wayne helped himself to a heaping portion of the crustaceans before the elevator doors could reopen. When the waiter informed the actor that he had just consumed another party’s platter, Wayne made good by bringing the remainder of the dish straight to the guest’s door—much to the delight of his unwitting hosts.

Spencer Penrose was a notorious partyer. And nothing—not even Prohibition it seems—could stop his habit. During the 1920s, the Broadmoor owner was known to throw parties, asking each of his guests to bring five bottles of their favorite “cologne.” He would often hire private trains to run nonstop between New York’s Grand Central Station and the resort, where he regularly wined and dined his guests in spite of the booze ban. And when he wasn’t partying, he hid his stash right underneath the resort. A recent renovation of the Broadmoor uncovered his pricey 600-bottle stash, including an 1891 Château Franc La Rose and 1850 Hunt’s Empress port.

Like all good stories, the legend of Penrose lives on, thanks in part to the narrative of the resort’s current owner, billionaire Philip Anschutz, who regularly visited the resort as a young boy and once told his parents he would one day buy the hotel. Though the elephants and seals are gone, and the alcohol is no longer hidden beneath the floorboards, the legend of Broadmoor, 100 years on, is still fully intact.