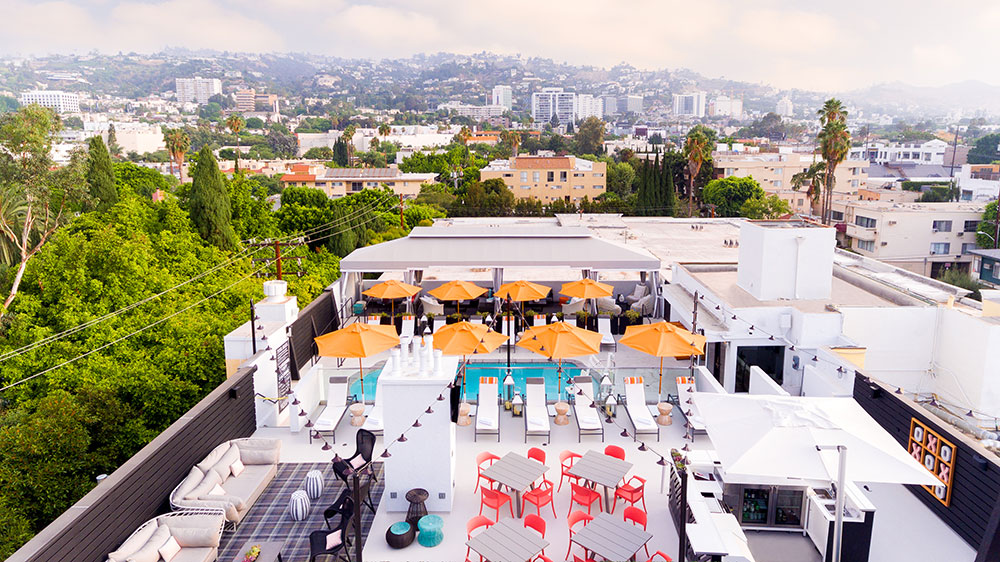 As long as it’s not raining, rooftops are the place to be nearly year-round in LA. After all, the city practically invented the concept, with The Standard, Downtown LA opening one of the first back in 1999. Ask a local and they’ll tell you that for a city this size, there aren’t as many rooftops as you’d expect—though there are still plenty to choose from, ranging from laid-back to glitzy depending on your mood. Downtown has the highest concentration, not surprisingly given the amazing skyline from that vantage point. The best part about the LA rooftop scene though is that it’s accessible for everyone: The lines aren’t (usually) long, and there’s always a diverse mix of people that speaks to the diversity of the city overall. Here are our top 10 (plus one bonus!).

Set your expectations high with an evening at Spire 73, the tallest-open air bar in the Western Hemisphere. Set on the 73rd floor of InterContinental Los Angeles Downtown, this sophisticated space boasts unrivaled views of the skyline, comfortable seating nestled around cozy firepits and top-shelf whiskey, alongside a small menu of elevated bar bites like carnitas fries and uni deviled eggs. (If you visit after dinner, be sure to order the tableside s’mores.) A nominal entry fee for non-hotel guests is waived for reservations with bottle service.

The trendy set flocks to Freehand Hotels’ signature rooftop bar, Broken Shaker, in each of the brand’s four locations, but especially to the Los Angeles locale for sunset watching and late-night music. Sip fruit-forward tiki cocktails like Tai Hard or Sunset on LA Playa out of eclectic vessels, or opt for the Punch Bowl, which serves up to 12 depending on your thirst level. Wear a bathing suit or an actual suit; the crowd won’t mind either way in this laid-back space filled with vintage furniture and a garden that pays homage to the California hills.

It’s no surprise that the Peninsula Beverly Hills, one of the swankiest hotels in LA, would also have one of the city’s best rooftops, though the vibe at the Roof Garden skews casual over glitzy. Snag one of the plush chaise lounges surrounding the 60-foot pool with a cocktail, fresh juice or smoothie in hand; many of the herbs, fruits and vegetables used in drinks and dishes are grown in the hotel’s own garden. Serving breakfast all day, the Roof draws brunch crowds every day of the week and is a favorite among Hollywood agents and celebrities—so play it cool when you spot cabanas filled with VIPs.

The Rooftop by JG

Locals and visitors alike clamor for a spot at the glamorous Rooftop by JG, set atop the Waldorf Astoria Beverly Hills. Clichés aside, it’s truly the place to see and be seen, especially on weeknight evenings just before sunset. You don’t have to compromise on cuisine for views; you can get the best of both here with a new Asian-inspired small-plates menu from chef Jean-Georges Vongerichten. Try the sesame-crusted asparagus with yuzu sauce or roasted cod with Malaysian chili sauce, washing it down with the signature ginger margarita or a rosé-Aperol spritz.

Catch views from downtown all the way to the Pacific Ocean—plus a glimpse of the Hollywood sign—from boutique hotel Mama Shelter’s eponymous rooftop bar. A smattering of colorful furniture lends a casual, welcoming vibe to this sixth-floor space, which also serves Mexican-inspired fare (like a killer guacamole and spicy fish tacos) for lunch and dinner. If the elevated POV isn’t enough to keep you entertained, try a game of foosball or head to the video booth before saddling back up to the Moscow Mule bar, which offers seven takes on the refreshing drink.

The 11,000-square-foot rooftop space atop Dream Hollywood has one heck of a party trick: a pool that transforms into a dance floor at the push of a button. Made by the same firm that creates water features for Cirque du Soleil, this hydraulic lift makes weekly dance parties with top DJs not only possible, but the coolest place to spend a Sunday afternoon in LA. If you’re not staying at the hotel, you’ll need to ask a staff member to gain access; yet it’s worth the effort, especially if you reserve one of the six VIP cabanas.

Don’t expect bottle service and velvet ropes (or cover charges) at Upstairs, the rooftop bar and pool deck accessible via an express elevator from Ace Hotel Downtown Los Angeles. The vibe here is convivial and relaxed, with wicker furniture, stone fireplaces and rotating Chiller frozen cocktails. Entertainment is a constant, ranging from DJ sets to art shows to film screenings, and the first Thursday of the month is always comedy night. If your sweet tooth calls, try the famous housemade funfetti cake sold by the (giant) slice.

Weekend brunch is usually the busiest time to visit the Italian-inspired rooftop on the 12th floor of NoMad Los Angeles—one of LA’s splashiest hotel openings last year. Adjacent the pool is a replica of a 16th-century sculpture found in Italy’s Parco dei Mostri, or Park of the Monsters, which also functions as a fireplace. While the pool is reserved for hotel guests from sunrise to sunset, anyone is welcome at the café and bar, where you can sip drinks like frozen pina coladas at the marble bar.

The Skydeck at the newly redesigned Le Parc Suite Hotel in West Hollywood was designed to feel like you’re hanging out in a friend’s backyard. It’s for hotel guests only—yet it’s worth a stay when you’re in town. Float between three separate decks: One is home to new cabanas, the second has the pool, and the third includes the bar, dining tables and lounge furniture. Gaze out upon the Hollywood Hills as you sip jalapeño margaritas or fill up on Parmesan truffle fries and fish tacos. The best part of this backyard? You don’t have to do the cooking.

Walking into Catch LA is a trip through a secret garden, where an open-air walkway filled with bright flowers and plants leads to the open-air dining room with a retractable rooftop. True to its name, the swanky restaurant is focused on sustainable seafood, with incredible truffle sashimi and Cantonese lobster as highlights—though there’s also a vegan menu. It’s no surprise that a space this beautiful is also filled with LA’s most beautiful people, as everyone from the Kardashians to Mariah Carey have been spotted here.

OK, so it’s not one of LA’s best rooftop bars—yet. But if it’s anything like its Chicago predecessor, I|O Godfrey atop Godfrey Hotel Hollywood will be the hottest ticket in town when it opens this summer. Not only will it be the largest rooftop in Hollywood, it will also have a 28-foot projection-mapping screen for movie screenings and art displays, a pool flanked by two bars, secluded lounge areas, and a rotating calendar of musical performances and weekend workouts.