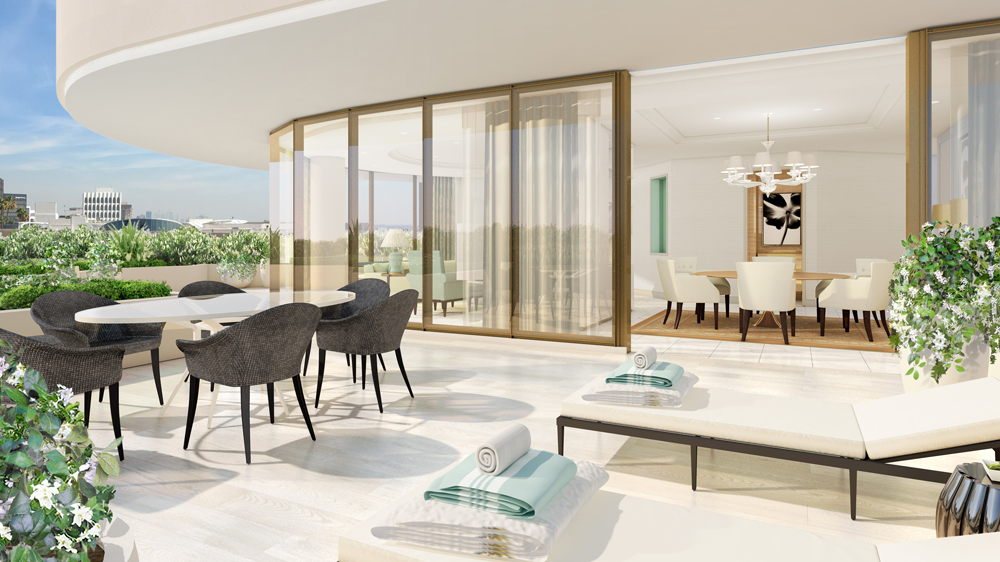 Los Angeles is abuzz with new luxury hotel openings. From the hills of Hollywood to the sands of Malibu, these are the hottest new places to stay in the City of Angels.

Waldorf Astoria’s new 12-story tower in Beverly Hills puts the city at your feet with views of the Hollywood Hills, downtown, the Pacific Ocean, and beyond. Inside, pearly art-deco-inspired interiors by French designer Pierre-Yves Rochon add glamour and sparkle, while Michelin-starred chef Jean-Georges Vongerichten helms the gourmet offerings in the main restaurant, rooftop restaurant, and bar (as well as on the room-service menu). A spa by the Swiss skincare line La Prairie offers treatments using the brand’s white caviar and pure gold products. And, for the first time, the Waldorf extends its personal concierge service to every guest. ($815–$20,000)

A downtown landmark dating to 1926, Hotel Figueroa has been restored to its original Spanish Colonial grandeur with whitewashed walls, dark wood, arched passageways, and fig-leaf wallpaper that just may rival the iconic palm fronds at the Beverly Hills Hotel. Chef Casey Lane (famous for his cavatelli and pig’s ears at Vencie Beach’s Tasting Kitchen) helms the hotel’s restaurants, while mixologist Dushan Zaric (co-owner of New York’s Employees Only) oversees the four bars—including the by-appointment-only Bar Alta offering rare spirits and bespoke cocktails. Nearly one-third of the 268 guestrooms are suites, including one with a 500-square-foot terrace and access to the Figueroa’s original 1920s tiled pool (which it conveniently shares with a pair of bars). ($329–$3,000)

Chef Nobu Matsuhisa expanded his Malibu empire in April, opening his long-awaited hotel just steps from the new location of his acclaimed sushi restaurant. The 16-room Nobu Ryokan Malibu—the first of the new Nobu Ryokan chain—hovers over the sand on Malibu’s Carbon Beach. In the guest rooms, baths feature Japanese soaking tubs, open showers, and Loro Piana cashmere robes. Amenities are few, but the staff can arrange anything from surfing lessons to spa treatments with top local purveyors. (Rates start at $1500.)

The dramatic homes of the Hollywood Hills inspired the design of the Dream Hollywood, which is slated to open next month in the heart of Hollywood. Floor-to-ceiling windows offer fabulous views from each of the 178 rooms; one of the guest house suites even features a 14-foot ceiling with a 180-degree vista. Nightlife will also be a draw, with entertainment venues including outposts of Beauty & Essex and Tao, as well as the Highlight Room, the enticingly named hotel rooftop which features a nightclub and sexy swimming pool. (Rates start at $305 for standard rooms and $5,000 for the guest house suites.)