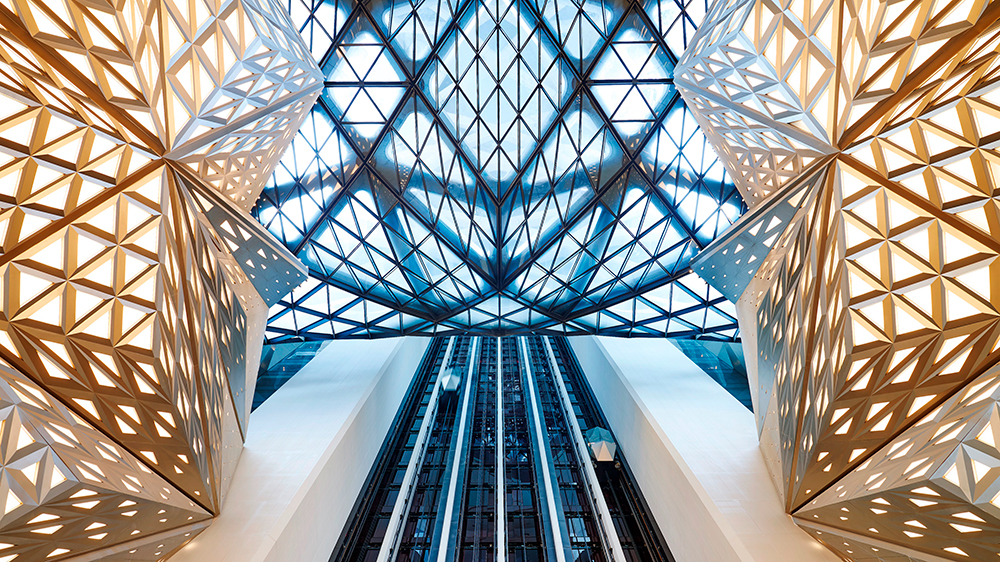 Travel itineraries are often chock-full of sightseeing architectural stunners — especially if you’re a design aficionado. But on occasion, a destination offers more than just a chance to glimpse a world-famous example of architecture: Every once in a while, you can actually stay the night in one. Some of the world’s foremost architects have tried their hand at hotel design, making it possible for fans to get up close and personal with some of the most important design thinkers of the past and present. From modern-day heavy hitters like Frank Gehry and Zaha Hadid to legends like Mies van Der Rohe and Le Corbusier, these are the best hotels designed by starchitects.

Designed by Japanese architect Kengo Kuma, the eye-catching ONE@Tokyo has all the hallmarks of its creator’s chic, minimalist style: The entrance is hidden behind an abstract arrangement of wooden planks, while smooth concrete makes for a surprisingly peaceful and inviting juxtaposition. The 142-room hotel sits in one of Tokyo’s most enviable locations, just steps away from the iconic Tokyo Skytree in the Oshiage district, in a ten story tower. Inside, it’s obvious that Kuma was involved in almost every aspect of the design, from the rooftop garden (the architect is a big fan of green spaces) down to the staff’s crisp and clean black-cotton uniforms.

Charles-Édouard Jeanneret, better known as Le Corbusier, is one of the most significant pioneers of modernist architecture. His body of work was dedicated to improving the quality of life for residents of crowded cities, and his work had a major impact on the way we plan urban centers today. To experience his influence first hand, a visit to Marseille’s Hôtel Le Corbusier is a must. Even if the 21-room hotel went by another name, it would be obvious to any architecture-phile was behind the structure’s modern design, which utilizes color and affordable materials to create a thoughtful yet simple design. Constructed within the 10-acre Unite d’Habitation development between 1947 and 1952, the structure is part of Le Corbusier’s first large-scale project, but the building’s materials, furnishings and other features have been meticulously restored with careful consideration and assistance from the Le Corbusier Foundation.

As the designer of Le Grand Louvre, the Kennedy Library, and the National Gallery of Art, I.M. Pei isn’t just an architect of buildings—he’s a creator of institutions. And his Four Seasons Hotel New York—which opened in Midtown Manhattan in 1993—is no slouch by comparison. For both the exterior and interiors of the 52-story building on East 57th Street, Pei used the same honey-colored French Magny limestone that he employed in his expansion of the Louvre, creating a warm palette that looks as modern today as it did more than two decades ago. Through careful consideration, the lobby and shared spaces are designed less for efficiency and more toward the pleasures of a luxury hotel experience. And taking that notion to extreme heights—literally—is the penthouse suite, which Pei designed over a period of seven years at the request of the building’s owner, Beanie Babies billionaire Ty Warner. The 4,300-square-foot accommodation occupying the hotel’s top floor is one of the most expensive in the world at $50,000 per night—and those who can afford would no doubt say it’s worth it to sleep in the creation of one of the world’s greatest starchicts.

Mies van der Rohe, another pioneer of modernist architecture, designed the 52-story IBM tower (renamed AMA Plaza) in 1972. A few decades later, The Langham moved in to occupy 13 floors of the iconic bronze-tinted glass and anodized aluminum Chicago structure in 2003. Today, the hotel gracefully blends urban sophistication with refined luxury and features a fine-art collection of more than 150 pieces . The lobby of the hotel is perhaps the greatest nod to its creator: Adorned with white marble walls and minimalist, midcentury furniture, and taking full advantage of the sweeping windows of the original architecture, the space is a grand tribute to van der Rohe designed by his own grandson, architect Dirk Lohan.

The Langham is the only van der Rohe building to be repurposed as a hotel.

Frank Gehry turned the Spanish city of Bilbao upside down when he unveiled his dramatic Museo Guggenheim Bilbao. It was equally adored and reviled for transforming the old industrial city into an overnight contemporary-art sensation. Apparently, however, the favorable results were hard to deny, because only a few years later, the starchitect was tapped to design the Hotel Marqués de Riscal in the Rioja wine country, not far from Bilbao. According to Gehry, the hotel’s design—composed of his trademark undulating waves and zigzagging features—was meant to reflect the spirit of both the winery and the region. To that end, the spectacular facade is made of undulating titanium ribbons in pink, silver and gold, which respectively reflect the hues of the Rioja wine, the foil covering the bottle’s cork, and the mesh adorning all Marqués de Riscal bottles. Gehry is well-known for such on-the-nose references, but the 43-room hotel—which is adorned with the architect’s own custom furnishings as well—is more than an architectural masterpiece; it has an amazing gastronomic restaurant, an excellent art collection and, of course, a cellar full of Rioja’s finest wine.

We all know Michelangelo as a legendary painter and sculptor, but the Italian artist was an architect as well. And though the master didn’t exactly build Belmond Villa San Michele, the hotel’s 15th-century facade is attributed by historians to his magnificent hand. The Villa, which is surrounded by lush forests and tiered gardens on the hill of Fiesole overlooking Florence, clearly has a remarkable history. Originally a monastery for Franciscan monks, it eventually became Napoleon’s Florence headquarters, and finally, in 1982 became a hotel when Belmond (then known as Orient-Express) purchased it. But staying at this treasured landmark isn’t only architecturally and historically appealing: It also promises the true essence of la dolce vita, with a world-renowned restaurant and, for VIPs, a two-level villa complete with a private pool.

The zig-zagging lines of Morpheus Hotel‘s rectangular-shaped tower create a sci-fi illusion—and the basis for the Macau property’s name (that’s right, it’s not a Matrix reference). It was designed by the master of futurist architecture herself, Zaha Hadid, who  simulated the fluid forms of China’s jade carving traditions by actually carving a series of voids into the center of the tower. The architect described the resulting spaces as “urban windows”. Inside, 12 glass elevators allow guests to marvel at the exoskeleton around them as they rise vertically to their rooms. Even with all this fantasy, the hotel remains a classic Macau stay that features all the requisite luxuries: a casino, Michelin star-rated restaurants, and a jaw-dropping 770 guest rooms.

The Morpheus Hotel looks like something out of a sci-fi novel.  Photo: Virgile S. Bertrand

Foster + Partners’ 336-room Hong Kong hotel, The Murray, creates a dialogue between old and new while aiming to reinvent a historic district of the sprawling Asian metropolis. The three-story arches lining the exterior of the architecture are juxtaposed by square-grid windows that rise up the rest of the tower. The unique design of the deep-set windows ensure that the sun never shines directly into the rooms; rather light bounces off the slanted design to create a soft glow inside each space. Located between Hong Kong Park and the Botanical Gardens, The Murray is a testament to modern-day Hong Kong, melding the old and new.

The Murray’s glowing, golden lobby.  Photo: Courtesy of The Murray

If you want to put your name on the tourism map, there’s one guaranteed way to do it: Hire a starchitect like Rem Koolhaas of OMA to build an innovative, futuristic tower that will have everybody talking. That’s how Rotterdam did it—and it absolutely worked. In 2014, the renowned Dutch architect completed his trio of steel and glass monolith towers along the river Maas, and that same year, the Nhow Rotterdam opened for the first time. The entire structure is the largest building in Rotterdam—and all of Europe—and the 278-room hotel takes up 23 of its floors. In the lobby, a large brass reception desk and elements of gold make for a striking contrast to concrete walls. It’s innovative and aggressive, yet functional inside. In other words, it’s classic Koolhaas.