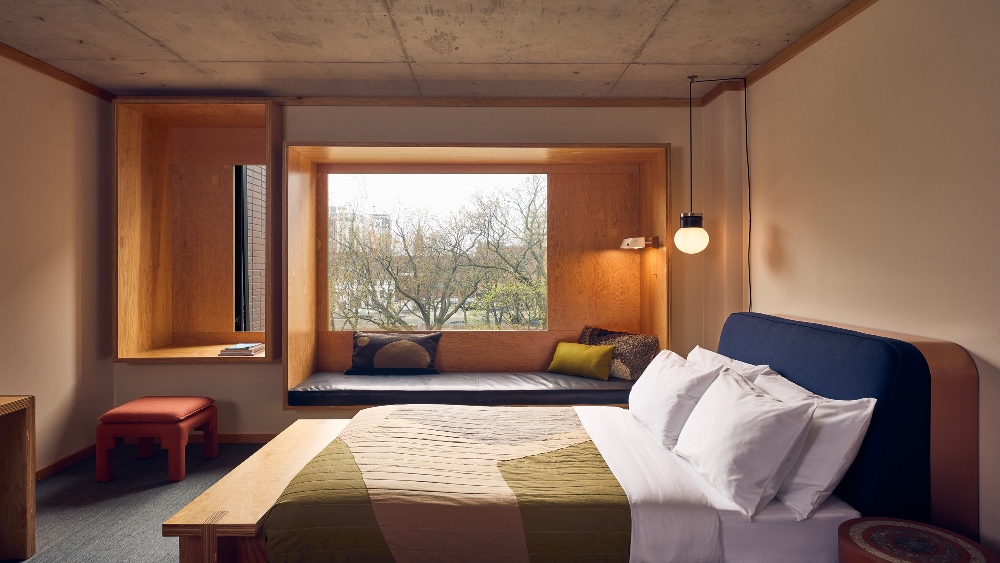 The Ace Hotel group, which has opened 10 boutique hotels in the past 20 years, debuted a new outpost in the Canadian metropolis this week. It’s Ace’s first foray into the land of the Maple leaf and aims to combine the local culture with the group’s signature hip décor.

The 123-key hotel was designed by local architecture firm Shim-Sutcliffe Architects in collaboration with the group’s in-house creative agency Atelier Ace. Located in the buzzy Garment District, it sports a red-brick façade that was reportedly inspired by the city’s visual identity. In the lobby, guests will be welcomed by a three-story art installation representing the waters of Lake Ontario. O Canada!

The patriotic touches don’t stop there, either. The interior palette was inspired by the colors of Ontario’s dense forests, while the curated art collection showcases works by nearly 40 predominately local artists. There are a few industrial elements, too, such as raw concrete and exposed steel rods, which nod to the city’s history of manufacturing.

“Long a leading global light for its forward-thinking approach to city-making and design, Toronto is a city that embraces originality and is rooted in the same open-to-all philosophy that founded Ace,” Atelier Ace CEO Brad Wilson said in a statement.

The rooms, billed as “urban cabins,” feature custom-designed lighting to set the mood, deep-set window benches and luxe copper accents. There’s also an in-room vinyl collection curated by the city’s storied independent record label Arts & Crafts. (Ace Hotel Sydney also has in-room record selections for music buffs.) Naturally, the 716-square-foot Ace Suite is a cut above the rest of the rooms, with a separate living room, a wet bar, a kitchenette, a custom Tivoli sound system and even a guitar.

The 123-room property is located in the heart of the city’s Garment District.  William Jess Laird/Ace Hotels

Acclaimed chef Patrick Kriss, behind the top-rated Alo and Aloette, will lead on-site restaurant Alder. Serving seasonal wood-fired fare, it’s due to open for dinner service on August 9. The Toronto native will also oversee the menus for the hotel’s rooftop bar and lounge, Evangeline, which is expected to open later this year.

“We could not be more proud to open Ace Hotel Toronto—the architectural magnificence of Shim-Sutcliffe Architects’ work has created a bona fide wonder,” adds Wilson. “They have built an inherently civic space that respects the neighborhood’s storied past while nurturing its future.”