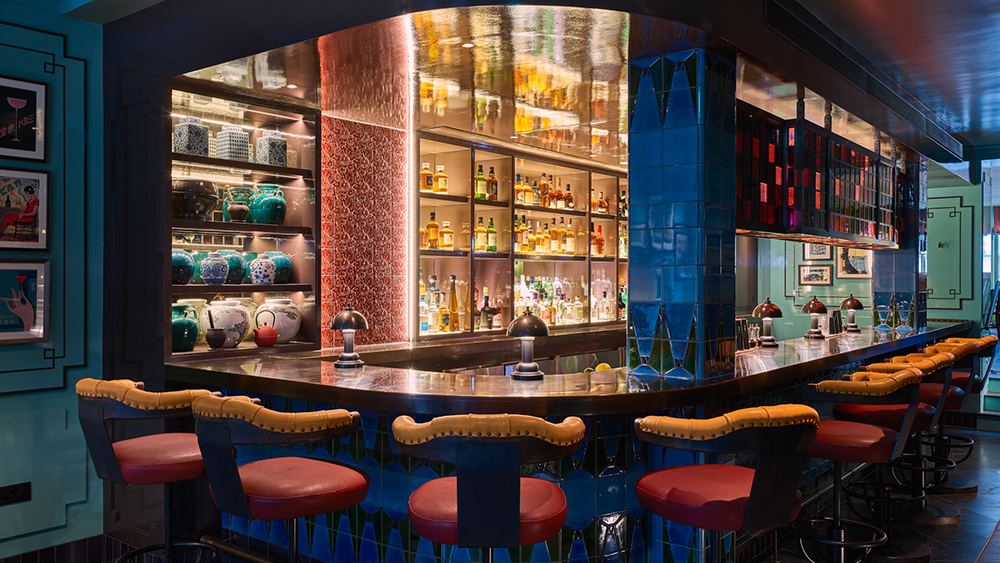 An old 18th-century London haunt isn’t where you might expect to find avant-garde omakase, but that’s exactly what’s on the menu at the newly revamped Beaverbrook Town House in Chelsea.

The boutique hotel, which marks the second outpost from the Beaverbrook brand (and its first in London), comprises two stately Georgian townhouses that were originally commissioned by Charles Sloane Cadogan back in the 1800s. Collectively spanning 15,000 square feet, the townhouses were most recently used as apartments before they were combined and treated to a meticulous 12-month restoration. The expansive new Town House, which started welcoming guests in September, offers 14 upscale suites, as well as a contemporary Japanese restaurant and bar.

Like Beaverbrook’s high-end country estate in Surrey, which opened in 2017, the Town House was named after press baron and wartime MP Lord Beaverbrook. (The Surrey property was actually the former home of the Lord, while the Town House is intended to reflect his antics in the city.) The mover and shaker lived quite a colorful life, and was known for hosting the likes of Winston Churchill, Ian Fleming and Elizabeth Taylor at his homes in Fleet Street and Surrey in the early 20th century. The hotel draws upon the Lord’s predilection for entertaining, and artfully encapsulates the spirit of the Roaring Twenties.

The living room of one of the suites.  Beaverbrook

From check-in, it’s clear that Beaverbrook’s first London hotel is just as eclectic as its namesake, and will stand out amid a flood of new openings in the city for all the right reasons. Town House Manager Jake Greenall tells Robb Report the overall vibe is “fun luxury,” meaning you can expect white-glove service and five-star amenities without the experience being overly stuffy. It really feels like you’re staying with a well-heeled friend who has given you full permission to indulge in the finer things.

That indulging starts in the suites, where you can recline on the sofa and order a tipple to be delivered directly to the door, before enjoying an in-room massage or beauty treatment. Once suitably relaxed, make a beeline for Sir Frank’s Bar, where the brimming cocktail list features Beaverbook specials alongside classic London libations. Naturally, there’s a drink named after Sir Winston, and a good whack of martinis in honor of Fleming’s famous fictional spy; the 007, for instance, pairs Sipsmith VJOP Gin with vermouth and Campari. The bar’s leather-lined booths are the perfect place to enjoy a pre-dinner snack with a glass of Beaverbrook’s own bubbles in hand.

From here, you can opt for a seat at the omakase table (available Wednesday to Saturday only) and watch Chef Goemon Ishikawa as he meticulously prepares 20 courses by hand. Hailing from Japan, Ishikawa has trained throughout the world and thus his dishes are a pastiche of different cultures and cuisines that highlight the finest local produce. You’ll find his Mom’s chicken and mushroom chawanmushi next to a serve of Scottish lobster with XO sauce, for example. Entrust the sommelier to curate your wines and the experience improves tenfold. In fact, the omakase is worth booking even if you’re not staying at the hotel.

In addition, you can also dine à la carte at the Fuji Grill and savor an array of tempura, sushi, sashimi and nigiri. The Japanese theme, which is intended to appeal to cultured city folk (and is also found in the Surrey location), carries over to the restaurant’s design itself. Adorning the walls is a trove of Japanese art, including 19th-century woodblock prints of the eponymous Mount Fuji and Hokusai’s Great Wave off Kanagawa.

It would be remiss not to mention the rest of the Town House’s distinctive décor. The handiwork of Beaverbrook’s design duo, Sir Frank Lowe and Nicola Harding, the interior was inspired by the Art Deco aesthetic of the 1920s, and is a playful blend of old and new. You can expect lots of vibrant colors and statement wallpaper, along with an elegant mishmash of textures and furnishings; think plush velvet contrasted with luxe marble and gleaming brass. The space is littered with dramatic lampshades and charming antiques sourced from an array of nearby designers and suppliers that, when taken together, give off all the quirky appeal of a Wes Anderson movie.

The hotel is also a heartfelt celebration of British history. Each of the 14 suites is named after a famous London theatre and is decorated with clues to its playhouse’s past. There are also references to the city scattered throughout the rest of the interior to give a good dose of English pride without the patriotic rah-rah.

On top of that, the Town House is located on Sloane Street, which means you have the very best of Chelsea right on your doorstep. With access to Beaverbrook’s “black book”—a list of cherry-picked partners and local contacts available via the concierge—you can partake in a private shopping experience on King’s Road or stop by Pavillion Road to visit the borough’s finest butchers and cheesemongers. As the idyllic Cadogan Gardens are also opposite the hotel, you can also borrow some rackets from reception for a spot of tennis or even book a personal trainer.

In fact, the hotel was opened in partnership with Cadogan. The real estate powerhouse, which is helmed by one of the richest families in the UK, owns large swathes of Chelsea (the Town House included) and is committed to bolstering the appeal of the borough by investing in local businesses and projects. Through openings like the Town House, travelers are given an opportunity to soak in Chelsea and its rich history, while Londoners may find a new fondness for the area. His Lordship would no doubt approve of that. Rates start at roughly $600 a night for a classic room and stretch all the way up to around $1,500 a night for a studio suite. The omakase package starts at approximately $1,100 and includes overnight accommodations, the 20-course dinner and a full English breakfast.