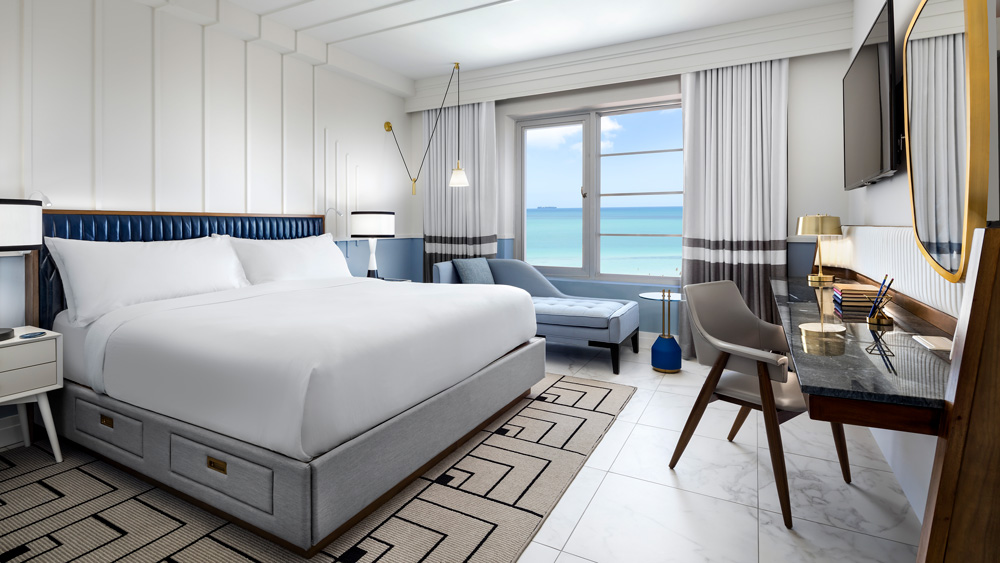 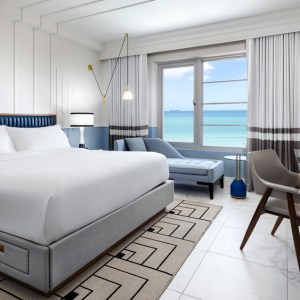 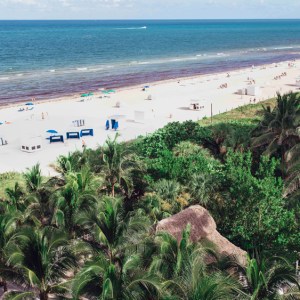 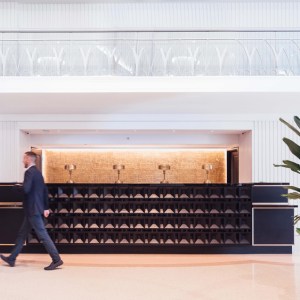 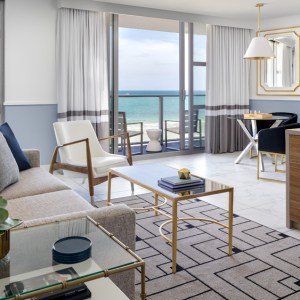 With its groovy, rounded architecture and glowing cursive neon sign out front, the Cadillac Hotel & Beach Club has one of those facades that tugs hard at the strings of nostalgia. Designed in the 1940s by famed architect Roy France (one of the bastions of the city’s Art Deco style), the property is located in the center of Miami Beach on Collins Avenue in what was once the beating heart of the glamorous, postwar Miami jet-set scene. Though the property fell out of favor as resorts like the Fontainebleau and Eden Roc opened up on the northern end of the Avenue, it’s not hard to imagine those pastel-colored DeVille convertibles rolling up out front and emptying their well-heeled passengers. And now, thanks to a multimillion-dollar, top-to-bottom renovation, the newly minted Autograph Collection hotel is back in glittering Art Deco form.

Unlike other recent renovations of Miami-heyday institutions—the new Four Seasons Hotel at the Surf Club being a prime example—the Cadillac, which was never a paragon of luxury, holds on tight to its less formal, toes-in-the-sand approach to hospitality. The rooms, designed by New York–based Bill Rooney Studio, are airy and simple, wearing their 1940s Italian and French Riviera–inspired decor lightly. Of the 352, we’d suggest settling into one of the 20 suites—which, with terraces that start at a palatial 1,100 square feet, put a premium on views of the turquoise Atlantic Ocean that stretches out from the property’s private golden-sand beach.

And down on that beach, which stretches a full city block, is where guests will likely be spending most of their time, sipping cocktails from the beach menu and going out for a quick snorkel once they’ve had their fill of sunbathing. When they’re ready for a break from the sand, they can turn in to the adults-only pool (there’s one for families, as well). And if they’re looking to go a bit further afield, they can take advantage of one of the property’s signature experiences to catch a different perspective of the Miami coastline—from a private seaplane for a sky tour and day trip down to Key West, or from the property’s private yacht, which they can reserve for a full day out on the water.

The only piece of the full resort puzzle missing at the Cadillac is the full-service spa—not that visitors will be all that hard-pressed to find a more than worthy one nearby should they want to spend an afternoon catching up on some R&R (you can check out our top spa picks here). And once they’ve indulged in a massage or done some routine maintenance with an executive physical, they can settle back in on the property for a light dinner beachside at the Bungalow by the Sea. Or, grab a seat at Donna Mare for heartier Italian fare—putting on your best zoot suit is, thankfully, not required.