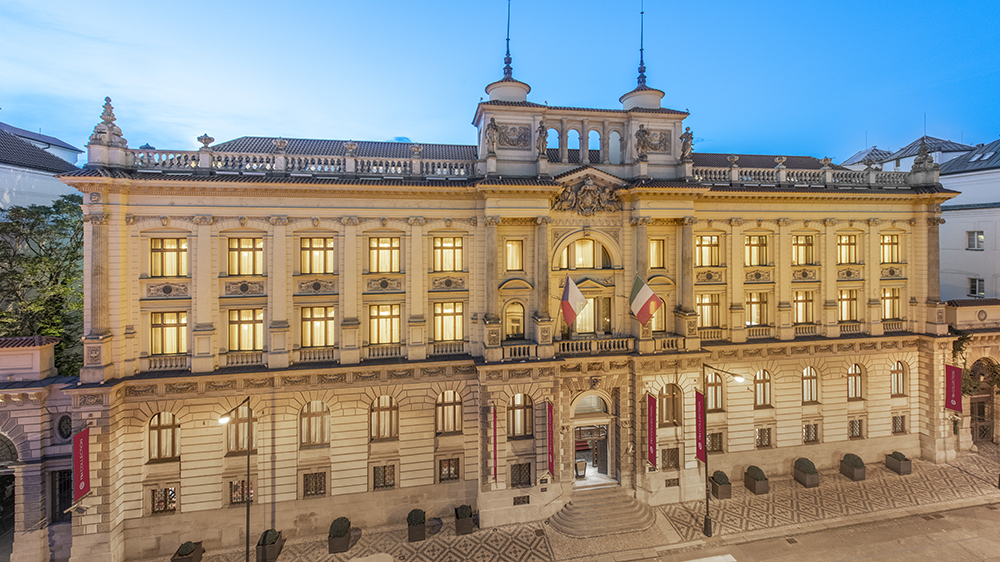 It’s not often that a Neo-Renaissance palace is converted into a luxury hotel. Prague’s Carlo IV, however, has been welcoming guests into its heritage-protected site since 2003. Now, following renovations that began in December of last year, the five-star property has fully reopened after getting a well-deserved makeover.

Located in the heart of Prague, the 152-room hotel’s changes were overseen by the city’s heritage office and international architectural studio Sulitze Muños. Its majestic lobby, dining venues, lobby bar and sought-after wellness and spa facilities have each been revamped to pay respect to the hotel’s distinguished history while also incorporating modern updates. Tasteful changes have even been made to guest rooms in the “historical wing” that, luckily, keep the high ceilings and wooden floors in place.

An overview of the updated hotel lobby.  Guido Pijper

The five-story palace originally opened as the First Mortgage Bank in former Bohemia back in 1890. Its lobby now pays homage to the bank’s former terminal hall with refurbished wooden frames on the original bank teller’s window. A new lobby bar has been added to the opulent hall, serving up cocktails, coffee and live music. Fans of the hotel before its redesign, however, will be pleased to know its elegant seating, ceiling frescoes and Ionic columns have not changed.

As for dining, you’ll find that the hotel’s signature restaurant, 1890, has undergone its own makeover of sorts. Located just behind the lobby hall, it offers a new tasting plate-focused menu. The lobby bar will serve sharing platters as well but with a new twist on Czech staples.

NH Collection Prague Carlo IV’s wellness and spa facilities also gained quite a rep before the renovation. The 66-foot-long heated pool and two whirlpools haven’t gone anywhere. They’ve just been updated with new tiling for a fresh look. The hotel is also planning to update its sauna and steam rooms in the second phase of the renovation, later this year.

“We wanted to reimagine the place and put the needs of the modern traveler first while preserving the historical elements, making sure there is comfort regardless of whether the guest is traveling for leisure or business,” Sander Creemers, regional director of operations at NH Hotel Group, said in a statement. “The hotel’s transformation was based on our long-term research into new travel trends introducing co-working spaces, gastronomical open spaces with intimate corners and easy access to modern conveniences, such as easy charging in public spaces and guest rooms.”

The NH Collection Prague Carlo IV offers several room options, ranging from a standard Superior Room to a lavish Presidential Suite. Rates start at €204 (about $214 at current exchange) per night and go up from there. Visit the hotel’s website for more details.