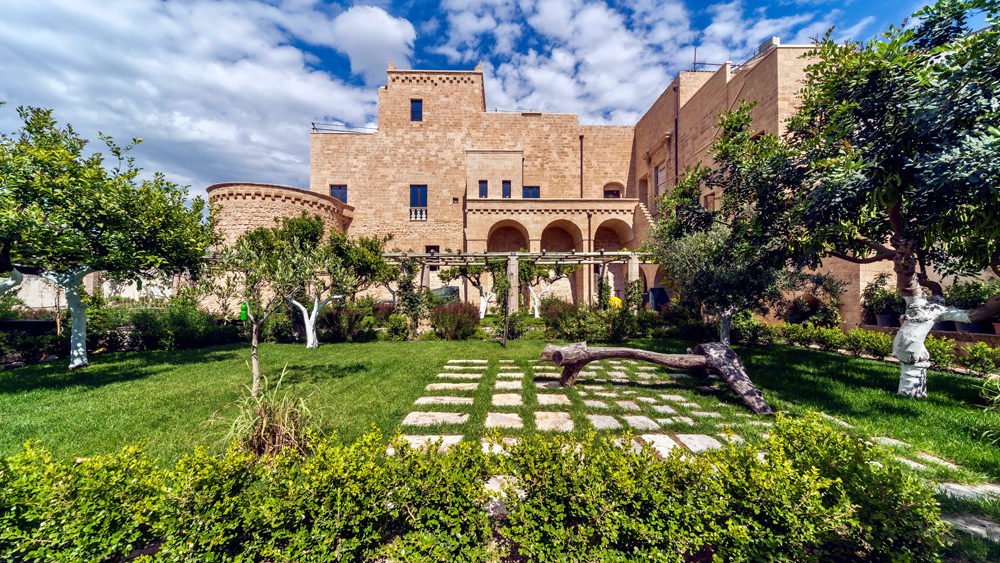 Towering high above the village of Ugento near the balmy Ionian Sea is the magnificent Castello di Ugento, Puglia’s latest castle hotel. Scheduled to open in October, a $10 million, 4-year renovation and restoration project has breathed new life into the historic property, transforming it into a sleek, contemporary retreat where gastronomy and art intertwine with luxury.

The ground-floor suites open onto the cobbled courtyard, close to the property’s 18th-century aromatic garden. On the first floor, Grand Baroque suites feature soaring Salentine, star-shaped vaulted ceilings and offer private terraces with romantic views across Ugento’s rooftops. The suites’ tranquil, understated décor invites guests to unwind, and en suite spa treatments, which feature organic products created especially for the hotel by a local perfumer, can be arranged for even further relaxation.

The castle’s original majestic staircase leads up to first-floor salons where high-baroque frescoes—originally commissioned by Francesco and Nicola d’Amore in 1694—have been meticulously restored. The frescoes here and throughout the property play on a pun on the family name d’Amore (of love); their iconography is based on Greek and Roman mythology and literary allusions, including Ovid’s Metamorphoses and The Fall of Icarus, and Rubens’s “The Judgment of Solomon.” Once used for entertaining well-heeled guests from around the world, these grand rooms now serve as the property’s new museum wing, which will offer cutting-edge art exhibits and installations, bringing 21st-century contemporary work into breathtaking century-old settings.

Castello di Ugento’s on-site restaurant, Il Tempo Nuovo, offers seasonal regional specialties crafted by chef and James Beard Award nominee Odette Fada, who was named one of the best Italian chefs by Wine Spectator in the late 1990s. Here, guests can dine under dramatic vaulted ceilings after sipping sunset cocktails in the walled kitchen garden, an 18th-century wonder abloom with more than 100 aromatic and medicinal local plants. The castle is also home to the state-of-the-art Puglia Culinary Centre, operating as an ongoing collaboration with the prestigious Culinary Institute of America. Bespoke classes on the ancient Pugliese art of cooking, as well as wine tastings and pairings, can be booked in its high-tech kitchens and in the castle’s original underground cistern, built more than a thousand years ago while the property was being used as a Messapian fortress.