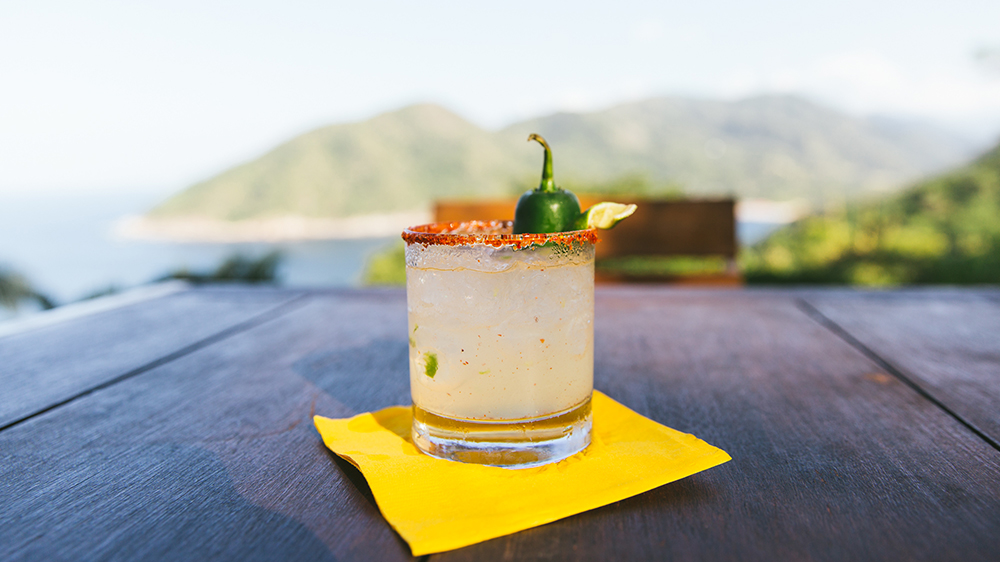 Though well known for beach bars and Spring Break–style haunts, Mexico also possesses a plethora of high-end drinking establishments set in the country’s most luxurious hotels. For Cinco de Mayo, locally-made drinks like tequilas and mezcals remain head honcho on hotel bar cocktail menus—though ingredients such as bean-infused bourbon, serrano peppers and roasted pineapple puree ensure that no two are alike. Whatever your poison, any one of these 12 south-of-the-border hotel bars is the perfect place to raise a glass to the Mexican army’s victory over the French—after all, if it wasn’t for that victorious day back in 1862, your favorite day to drink too many margaritas might have never have happened.

Views of a historic stone dam and hillsides of old-growth cacti set the scene for the ultra-exclusive Casa Dragones Cigar Bar, a surrealist-inspired outpost tucked neatly into the new LiveAqua San Miguel de Allende Urban Resort. The bar’s namesake tequila—founded by the creator of MTV, Robert Pittman, and the first woman to receive the revered title “Maestra Tequilera,” Bertha González Nieves—is the key ingredient for the Aqua Margarita, a concoction of orange and lime juice, citrus syrup, hibiscus concentrate and Casa Dragones tequila infused with serrano peppers, best sipped fireside while watching the moon rise over the dam.

The star of the show at the Luna Rooftop Tapas Bar at the Rosewood San Miguel de Allende is its romantic view of the cobbled streets, colorful rooftops, and pink-tinged grandeur of the neo-Gothic Parroquia de San Miguel Arcángel rising protectively over the city. Still, the inventive cocktails play a mean supporting role, and the ideal potion to sip in the atmospheric surroundings is the Mezcal Pepino, a mixture of 400 Conejos Mezcal, cucumber, agave honey, lime and orange juice and tajin chili powder.

You can’t go wrong when sipping on bubbly and dining on seafood by the beach, and the Champagne & Oysters Bar at the St. Regis Punta Mita Resort is no exception to the rule. The whitewashed, circular open-air bar conjures a Mediterranean vibe, as do the ocean views and cocktails (including a Champagne margarita, of course) featuring Moët Ice Imperial Champagne. The menu features Mexican oyster labels such as Bahía Falsa and the sustainably farmed Sol Azul variety, both originating on the rugged coasts of Baja California, plus other seafood favorites such as agachile shrimp, and tuna in soy sauce and yuzu.

Set in the former homes of Elizabeth Taylor and Richard Burton, Casa Kimberly is an alluring boutique hotel on a hillside in Puerto Vallarta. Within this storied complex lies the Iguana Restaurant & Tequila Bar, which evokes old Hollywood glamour with its twinkling chandeliers and an oversize painting of Liz. It’s also renowned for stocking dozens of rare and top-flight local mezcals, and tequila labels from the spirit’s birthplace in nearby Jalisco. Resident tequila experts are also on hand to lead private tastings—the perfect way to toast Cinco de Mayo.

This small hotel’s Mexican modernist architecture backdropped by the lush jungle of the Yucatán Peninsula is an example of juxtaposition at its finest. And though Casa Pueblo Tulum has only 16 rooms, it offers a wide array of festive cocktails and an Instagram-friendly ambiance at the urban Lovely’s Kitchen and Bar. The specialty of the house is the Casa Mezcal Mule, a beguiling combination of mezcal mixed with turmeric, ginger, agave honey, cardamom and citrus.

Reached only by boat, mule or foot, the remote stone-hewn Verana Bar at the eco-chic Verana boutique hotel is cleverly built into an area of jungle-strewn hillside that was cleared by hand with machetes. The striking views of the Bay of Banderas, along with the secluded locale and the mule-based cargo transport, add a poignant touch to the surprisingly varied cocktail menu, which includes favorites such as the Margarita Picante, featuring pineapple and habañero peppers.

Freddy’s Tequila and Ceviche Bar at the Belmond Maroma Resort & Spa is a quintessential-yet-polished beach bar complete with a thatched palapa-style roof, and the area’s largest collection of tequila and mezcal. The bar’s gregarious namesake expert Freddy guides tequila aficionados and neophytes alike through the vast collection, pairing each with a fresh ceviche. The soundtrack of waves and sea breezes coalesce splendidly with drinks like the Telchac, which features Xtabentún, a traditional Yucatán liquor used by ancient Mayans in religious festivals.

Though lesser known to international travelers than the famed beaches of Cancún or Puerto Vallarta, the quaint fishing village turned up-and-coming resort town of Zihuatanejo has become a trendy travel destination in part due to the 2019 opening of the Thompson Zihuatanejo. The boutique hotel’s prized possession is HAO, an open-air beachfront restaurant and bar where the cocktails take second place only to the sizzling sunsets. The menu rotates due to local ingredients available seasonally, but includes options such as the Roasted Pineapple Mezcalita made from blanco mezcal, housemade roasted pineapple puree, lime juice and crushed pink pepper.

On a flour-soft beach at the southern tip of Cancún’s lively hotel zone, the locally-owned NIZUC Resort & Spa occupies land formerly reserved for the private vacations of Mexican presidents. This lavish, design-focused property has a total of four bars, with the Cuban-style Havana Lounge being the most upscale offering. Hand-rolled cigars, regular live music and a picturesque deck set over tranquil reflecting pools are all highlights, as are tastings with a certified tequila master.

Combining Japanese minimalist aesthetics with the boho beach vibes of Los Cabos, the recently opened Nobu Hotel Los Cabos is the brand’s first foray into Latin America. The visually pleasing outcome of the two styles is represented in the gorgeous pool area, complete with the ultrachic Playabar. This streamlined poolside hot spot has a menu filled with both classic and locally-inspired cocktails, plus a menu of small bites highlighting both the local cuisine and the Japanese flavors for which celebrity chef and owner Nobu Matsuhisa is famous.

This furtive, invite-only hotel owned by the tequila giant Patrón is set amid prized agave fields in Mexico’s Jalisco highlands. The ostentatious opulence on display ranges from bespoke furniture, artwork and blown-glass chandeliers resembling agave plants, to a hammered-copper bar featuring the brand’s 18 different tequila varieties—available either by the glass, or as part of a cocktail like the Piedra Old-Fashioned made with Gran Patrón Piedra, agave syrup and aromatic bitters.