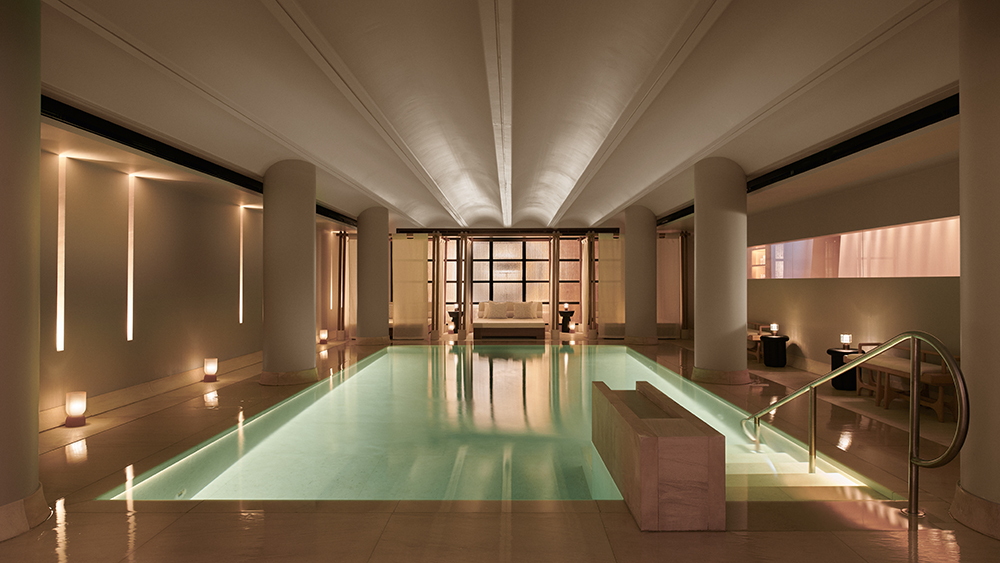 The iconic hotel, which has been welcoming royals and the well-to-do since 1812, relocated to its current address in 1898. That space, in London’s posh Mayfair neighborhood, underwent a decorative transformation in 1929 and a restoration in 1996 spearheaded by acclaimed designer Thierry Despont. While the site has introduced countless special amenities since, its new 7,000-square-foot spa is a first.

On Monday, Claridge’s announced the opening of the health and wellness-focused space, designed by interior architect Andre Fu. It’s located three floors below the lobby, and is the product of an excavation project that made space for a number of other amenities, including a heated swimming pool, a steam room and a sauna. The spa has seven treatment rooms that offer everything from massages to facials and hair styling.

When you enter the space, you’re greeted with relaxing notes of cedarwood, clary sage and cinnamon from the spa’s custom fragrance. The design, inspired by Fu’s visits to Japanese temples and Zen gardens in Kyoto, leans heavily on natural elements, including limestone, wood paneling and the sounds of various water features.

Intricate ikebana-style floral arrangements, inspired by the rhythm of the seasons, are also placed around the spa to enhance its setting. Other standout features of the space include a multi-vaulted ceiling, stone columns and the luxe oak-paneled treatment rooms.

The spa will offer a variety of treatments, including manicures, haircuts, massages and facials, with services priced from £15 to £455 (currently, about the same in US dollars). You can also book Augustinus Bader detox and facial treatments at the spa, as well as FaceGym treatments designed exclusively for the hotel that incorporates radio frequency and Cryo stimulation into its offerings. The spa’s salon space is helmed by renowned British colorist Josh Wood.

“We have created a spa here at Claridge’s where guests will find both holistic practices and results-driven high-tech all under one roof,” says FaceGym founder Inge Theron, who also serves as Maybourne’s creative director of spa and wellness. “[It] is the very beginning of a new wellness journey for Maybourne Hotel Group.”