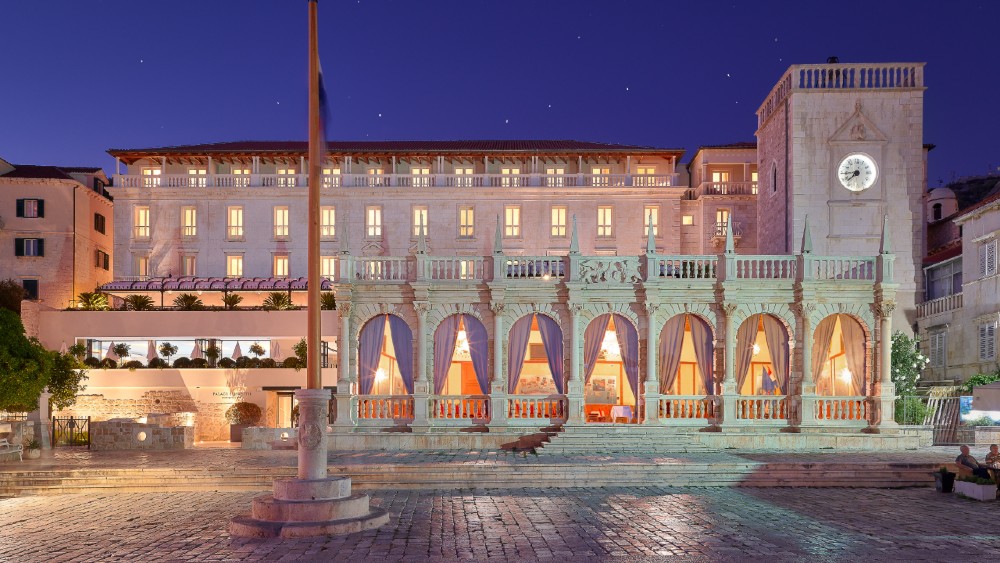 While the Dalmatian islands off the coast of Croatia are best known as buzzing summer destinations, modern tourism to some of these hotspots originally started in the winter, when travelers fleeing the cold would retreat here for the milder weather near the Adriatic Sea. In the late 19th century, one such traveler was Empress Elisabeth of Austria, who fell so in love with the island of Hvar—said to be the “sunniest” in the archipelago—that she paid to have a dilapidated Duke’s palace on the harbor transformed into a hotel. Named in her honor, the Palace Elisabeth Hvar Heritage Hotel has since become a historic landmark—and has just emerged from a two-year renovation that turned it into the island’s first true five-star hotel, and the first Leading Hotels of the World member on the islands.

Overseen by Croatian architecture firm Agro Inženjering and Czech interior designer Oto Blaha, the project saw a re-imagining of pretty much everything within the building’s walls. (The exterior, which features elements of both the 13th- and 16th-century Venetian-style Duke’s palace and the 1898 Austro-Hungarian-era hotel, enjoys protected status.) The number of accommodations has been reduced to 45 rooms and suites, many with sea views and all with complimentary mini-bars, Guerlain bath products and subtle design nods to the time of the namesake Empress. The latter can also be seen throughout the public spaces, in touches like a wall of white hand fans running up alongside the main staircase, hand-painted murals, period-themed shadowboxes and cheeky portraits peeking out from behind the reception desk.

The hotel enjoys a perfect location on Hvar town’s main harbor, steps from the speed catamaran connections to Split and Dubrovnik (a uniformed staffer will help ferry your luggage anyway) and close to the jumping-off points for yachting adventures, wine tours and cycling tours in the lush interior of the island. When you want the relax away from the fray, there are plenty of idyllic spots at the hotel, including an indoor pool with jetted loungers and an adjacent sun deck, a chic outdoor lounge and a three-room spa offering treatments using high-end lines from France. The breezy San Marco restaurant, which serves Mediterranean-inspired fare (and an abundant included breakfast) overlooking the sea, sits almost on top of the original pillars from the Duke’s palace—another reminder of the spot’s storied past.