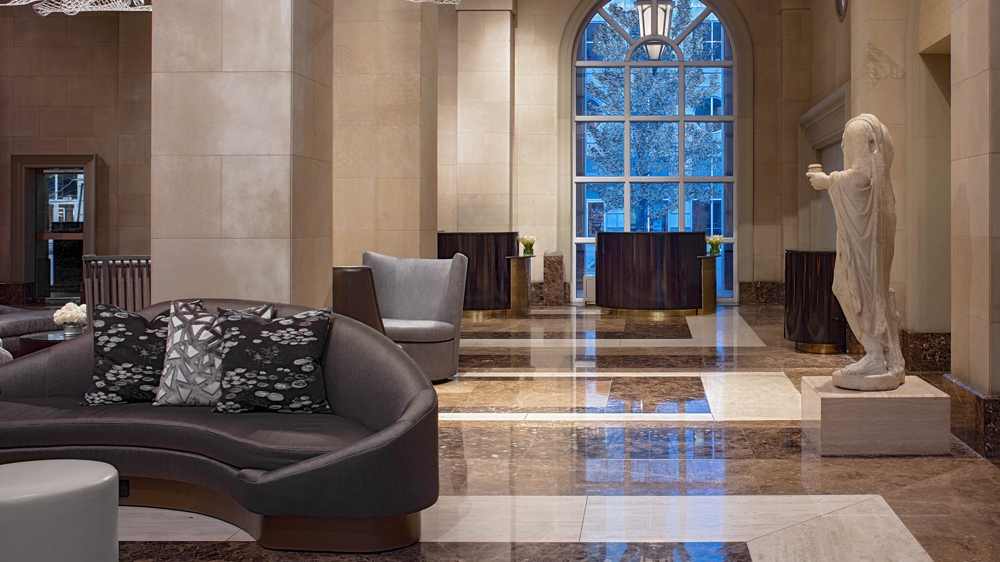 In its first major renovation since its completion in 1985, Hotel Crescent Court in Dallas’s exclusive Uptown neighborhood has unleashed a $33 million overhaul to its rooms, corridors, lobby, spa, and fitness center.

The hotel and surrounding complex were originally conceived by oil heiress Caroline Rose Hunt, back when Uptown was nothing but empty lots and warehouses. Hunt—who still resides in the building—spared no expense in creating the five-star landmark hotel, hiring the Pritzker Prize–winning architect Philip Johnson to design the French Renaissance façade and crescent-shaped structure. The hotel broke a world record for the amount of limestone required for its construction—surpassing even the Empire State Building—and more than 10 different types of marble from Italy and Spain can be found throughout its opulent exterior.

Given all its grandeur, the hotel’s transformation pays homage to its origins. The exterior of the hotel remains unchanged, but a full redesign of the 186 rooms and 40 suites modernizes the guest experience while still maintaining the elegance for which the property has long been known. Dallas-based interior and architectural design firm Waldrop + Nichols Studio installed all new bathrooms and furnishings using a blush, cream, and gray color palette to ensure a contemporary feel. In the suites, details like spiral staircases, hardwood floors, and floor-to-ceiling windows with views of the garden or courtyard offer additional luxuries.

The fully refurbished lobby still houses items from Hunt’s personal collection, including a massive 2,000-year-old, 7-foot-tall Roman marble statue of the god Aesculapius. But now it also features a modern design and a brand-new bar and lounge called Beau Nash. The swanky Champagne and craft-cocktail bar—whose focal point is a marble bar top imported from Spain—offers more than 30 labels of bubbly. The hotel has 12 other restaurants and lounges, including outposts of Nobu, Shake Shack, and local favorite coffee and wine bar Ascension, which opened in 2016.

The new 16-treatment-room spa launched in January with a fresh design from Michelle Meredith & Associates, providing Dallas’s wellness seekers with the latest in pampering and anti-aging products, including the InjectStem Bio-Firming Facial, also known as “Botox in a bottle.” There’s also a whirlpool, dry sauna, nail salon, boutique, and fitness center in the 22,000-square-foot facility, giving further credence to that age-old adage that “everything’s bigger in Texas.”