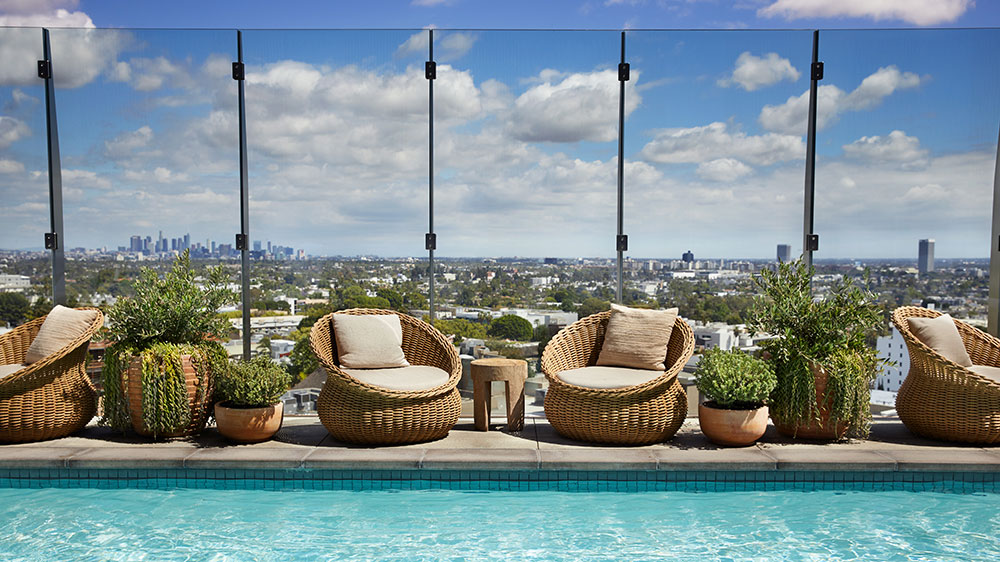 The transformation of West Hollywood has been touted for a while now. Last year’s grand reopening of the Sunset Tower Hotel under the ambitious hotelier Jeff Klein seemed to solidify the hype, as did the announcement that some of the world’s best chefs—among them David Chang and Michelin-starred sushi master Akira Back—were on their way to the neighborhood. With this month’s grand opening of 1 Hotel West Hollywood, however, the district isn’t just getting another flashy newcomer—it’s getting an attitude adjustment.

A decade ago, the Sunset Strip stretch on which the 1 Hotel sits wasn’t much to look at, let alone pull over for. There’s still remnants of that old WeHo block off La Cienega: the iconic Pink Dot delivery grocer across the street, the massive billboards (currently including an ode to Mariah Carey from her devoted fans) wedged onto every possible blank surface, and, next door, the Mondrian Hotel, which was something of a renegade when it opened in this once-seedy neighborhood back in 2019.

But the 1 Hotel is like gulping a fresh dose of oxygen after a long bout of holding your breath. Indeed, the air does seem cleaner there. Maybe it’s all the trees—locally sourced Aleppo pines and olive trees that were felled for other developments around the city and beyond—literally pumping oxygen into this urban oasis. It might also be the design, an earthy-inspired style that’s more green-chic than granola crunch. It’s all part of the 1 Hotel ethos, of course. The brand first launched in 2015 with a highly-acclaimed property in South Beach. It has since debuted two outposts in New York—a brilliant waterfront retreat in Brooklyn and a more incognito city hotel in midtown Manhattan—and has plans in the works for openings in Cabo San Lucas, Kauai, Toronto and Paris. Entrepreneur Barry Sternlicht, the mastermind behind the W brand and founder of the $60 billion investment firm Starwood Capital Group, has put his all into his newest endeavor, and the result is a hotel brand that has a more clearly defined ethos than most, focusing on wellness and sustainability. That means everything from going plastic- and (almost)-paper-free to making sure that nearly every kind of cold-pressed juice imaginable is available to guests 24/7.

There’s an obvious alignment of values here: LA has long been the healthy antidote to New York, and the 1 Hotel makes good use of the local sentiment, bringing in Performix House (a New York City–based fitness studio with unfairly good-looking trainers and a celebrity clientele), offering local experiences (like the as-intense-as-you-can-handle Canyon Run in the nearby Hollywood Hills), and filling the menu at the soon-to-open 1 Restaurant with chef Chris Crary’s healthy, local fare that includes ingredients from the on-site organic garden and a few zero-waste dishes. There’s also Alice, a charming café filled with dramatic marble and blue velvet by local favorite H.Wood Group; a rooftop pool with panoramic views stretching from downtown to the beach; and a second high-up outdoor space where Harriet’s cocktail bar has already become the hot place to see and be seen.

Still, everyone in West Hollywood seems to come with baggage—and the 1 Hotel is no exception. Two years ago, the property almost opened as The James (a West Coast outpost for a small brand that has locations in New York and Washington DC). But at the 11th hour, it was announced that Sternlicht had acquired the property and, until it was ready to pass muster under the 1 Hotel banner, it would operate as The Jeremy—another J name, and a sort of pop-up hotel awaiting its permanent status.

The reason for the delay was largely aesthetics. Though the Skidmore, Owings and Merrill–designed hotel was properly complete, it was too stark and spartan for Sternlicht’s (and 1 Hotels’) tastes. So he and his design team opted for a top-to-bottom renovation of the nascent spaces, replacing generic hotel furnishings with statements pieces that featured natural woods and linen; sourcing ancient artifacts, including 1,000-year-old fossils from Morocco and antique olive oil presses from Greece; and even going to the trouble of sanding down existing wood—overly polished and veneered as it was—to give it that earthy 1 aesthetic. Now, the lobby is awash in beige and white fabrics and rustic woods. The front desks are comprised of massive tree trunks, restored after being felled for the development of a new stadium. And the entrances—even the port cochère—are on their way to looking more like enchanted forests than concrete jungles.

The result is a showstopper that has taken a once-generic modern hotel and given it both personality and purpose. Two things LA has plenty of itself—but can always use more of.