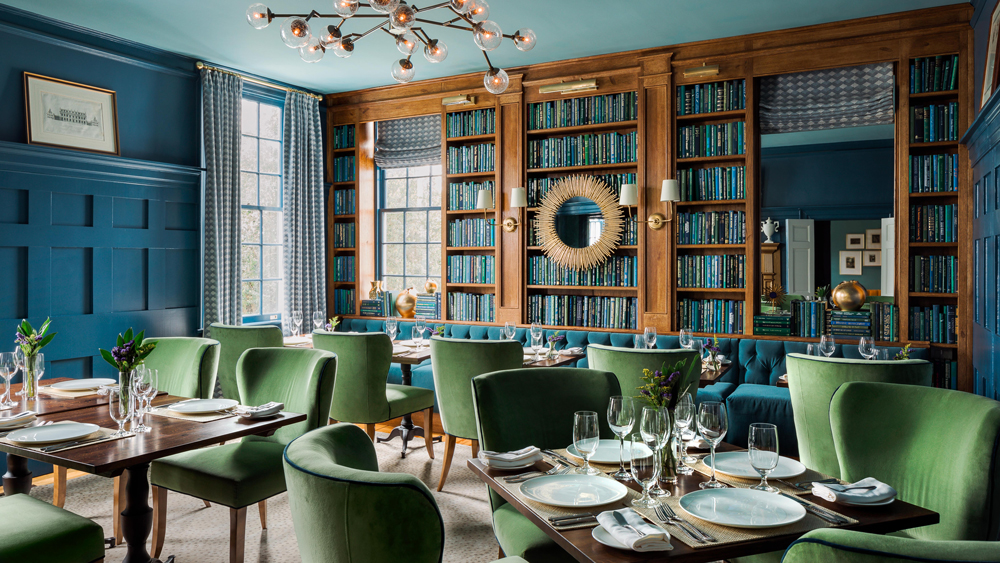 From the front lawn of the Clifton, nothing looks particularly new. The colonial-style Virginia manor house—which dates back to 1799, when Thomas Jefferson’s daughter Martha and her husband, Thomas Mann Randolph Jr., constructed it—appears an unmoving force of Federal-era charm in the rolling Charlottesville countryside. Located a short carriage (or car) ride from Monticello, the estate is practically a postcard for the horse-drawn beauty of the South, with its white clapboard facade, elegant pillared porch, and traditional navy shutters.

But ease past the porch and peek behind the front door, and you’ll find a revolution taking place inside: In June, the Clifton revealed a renovation by the brilliant design team behind Tennessee’s iconic Blackberry Farm resort. Making the most of its 100 historic private acres, the hotel’s five distinct buildings—which range from the original manor house to a law office constructed during the 1800s—are home to 20 guest rooms and suites. While each is unique, all feature an eclectic combination of past (antiques and claw-foot tubs included) and present (think modern art by William McLure and bespoke lighting by Los Angeles’ Luke Hobbs). A five-bedroom farmhouse is perfect for families thanks to a full kitchen, dining room, and private porches. Another five rooms inside the historic Garden Cottages are chock-full of heritage with exposed beams, red-brick fireplaces, wooden floors, and private patios.

Updating the estate’s verdant landscapes—which include an 18-acre lake—are an infinity pool, a hot tub, and new poolside cabanas covered in ivy. Thickets of woods abound, as do manicured gardens and a proper croquet lawn, all of which round out the sprawling countryside surrounded by the Blue Ridge Mountains.

Ringing in the rising culinary spirit of downtown Charlottesville, meanwhile, is the Clifton’s restaurant, 1799, which features an exclusive chef’s table where guests get an up-close view of the kitchen helmed by Michelin-starred chef Matthew Bousquet (who’s pulling flavor straight from the estate’s garden). The Copper Bar, too, brings an urban speakeasy vibe with top-notch finishes like a modern quartz bar, copper-trim-lined oak shelves, and velvet banquettes. Perhaps the most dramatic detail is the wine cellar, where guests can dine beneath an arched wooden ceiling and among troves of lauded local wines.

Guests of the Clifton also receive member privileges at Charlottesville’s über-trendy Common House, a 21st-century social club that debunks the old boys’ club mentality for a more youthful concept. As such, the Clifton fastens itself to history without getting stuck in the past—a classic countryside escape gone chic, without the pomp and with plenty of showstopping presence.