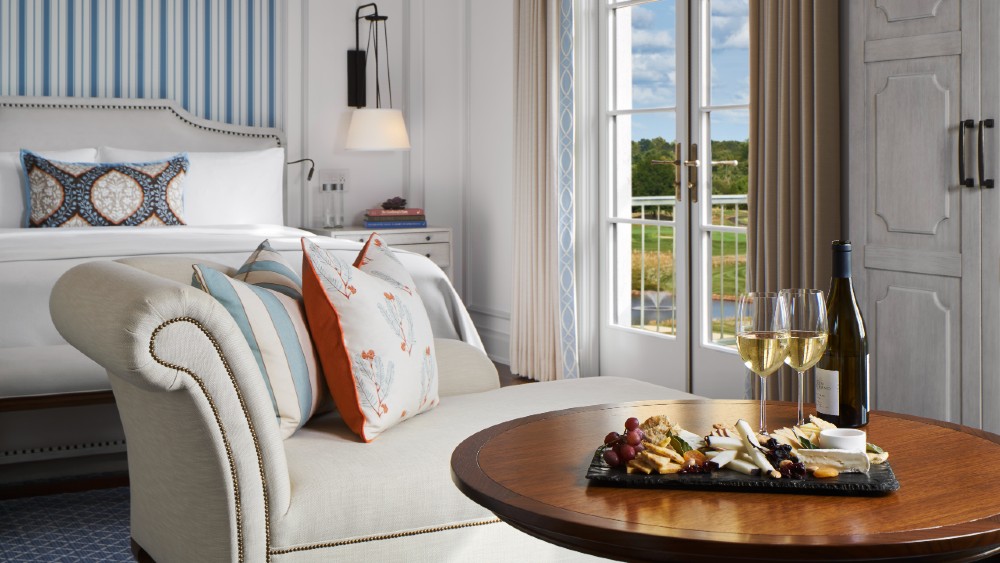 As often happens during the lead-up to a milestone birthday, a grande dame has just had some serious work done. Now—on the cusp of turning 110—an icon of the Virginia social and hospitality scenes is ready for the big reveal: Keswick Hall has officially reopened.

Not that the 1912 Italianate beauty beneath the Blue Ridge Mountains will be unrecognizable to longtime admirers, of whom there are legions, dating back to when the place was a thriving golf and country club and, later, a luxury boutique hotel. (There are so many layers and eras to the property, which started out as a private home, that a former resident historian wrote volumes on the subject.) Chief among its fans, though, are undoubtedly Robert and Molly Hardie, who now own the property after falling hard for it at a University of Virginia event in 1995, when Robert was enrolled at the Darden School of Business.

“There is this wonderful marriage between the architecture of Keswick Hall and the natural beauty of the surrounding mountains and landscape that transports you to a space outside of your daily life,” Molly tells Robb Report.  “Although the property is only a 15-minute drive from Charlottesville, it feels like you are in a new environment that could be across the world.”

That heady blend of the original Italianate architecture and the thousand-shades-of-green foothills—plus the wide-open vistas across the back of the property—kept the Hardies coming back for more. Over time, the couple progressed from guests to club members to partial owners. Then, in 2017, they became sole owners and set about refreshing the property with an eye toward every conceivable detail—starting with the historic ones.

For all the 21st-century additions, which range from a UV-filtered, dual-level infinity pool to personalized tech settings in each of the 80 new rooms, heritage remains a strong through-line—right down to the meticulous restoration of the commodes of Sir Bernard Ashley, a former owner of Keswick and the widower of Laura Ashley.  “We married many of the older pieces of furniture from Bernard Ashley—from a snooker table to a fireplace fender—with furnishings that have newer, cleaner lines,” notes Molly.

Heritage plants play an outsized role here as well, as they helped inspired the new signature scent. Dawn Meadow, which is used throughout the property and will figure even more prominently when the spa opens next year, is a collaboration with Yael Alkalay of organic beauty line red flower, who dug deep into the life of the surrounding indigenous flora before embarking on some “alchemy,” as Molly describes it. “She sourced freshly distilled wildflowers, herbs and leaves blended into pure plant butters and botanical oils to create a reflection of the rolling landscape, rich soil and local botanical heritage.”

Another A-List proponent of all things sustainable and local is now helping to put Keswick Hall on the destination dining map: Jean-Georges Vongerichten. “We knew we wanted to grow our own edible flowers, herbs and vegetables, and Jean-Georges was excited by this,” says Molly, while Robert adds that the couple appreciate “the fresh ingredients he uses, the simplicity yet the complexity of the tastes, and the amazing consistency.” Largely plant-based and local, and always seasonal, the offerings at Vongerichten’s new Marigold restaurant include the likes of fragrant artichoke tagine, sauteed beluga lentils and black truffle pizza (that last one a devotion-inspiring Jean-Georges staple).

Of course, the best showcase for the local nature is the land itself, so the Hardies brought in landscape architects Nelson Byrd Woltz to turn the grounds into an eminently walkable introduction to the native species, a move that also reduces water consumption and attracts optimal pollinators.

For those who prefer greens of a different kind, there’s the Pete Dye-designed golf-course, Full Cry, which is open to hotel guests and members of the Keswick Club. The course is a personal favorite of Robert’s, as are the European red clay tennis courts—which are apparently guest favorites, too. “People have commented to me that when they’re playing tennis on our courts, they feel like they are in a small village in France or Italy,” he says. (Of course, that nearby Italianate manor house doesn’t hurt.)

One of the new guest rooms.  Courtesy Keswick Hall

Not to be outdone, the newly expanded and revamped guest rooms include four signature suites, each with light woods, airy color palettes, Duxiana mattresses, Frette linens, UV air purification systems and more. For its part, the Hardie Presidential Suite pairs ample sleeping and living space with a Viking-outfitted kitchen, a wet bar, a private entrance and a balcony with mountain views for days. As Molly sums up, “Every element was looked at carefully to see how we could provide guests with the very best of what is relevant today, while still blending seamlessly into the history and nature.” Rates start at $995.