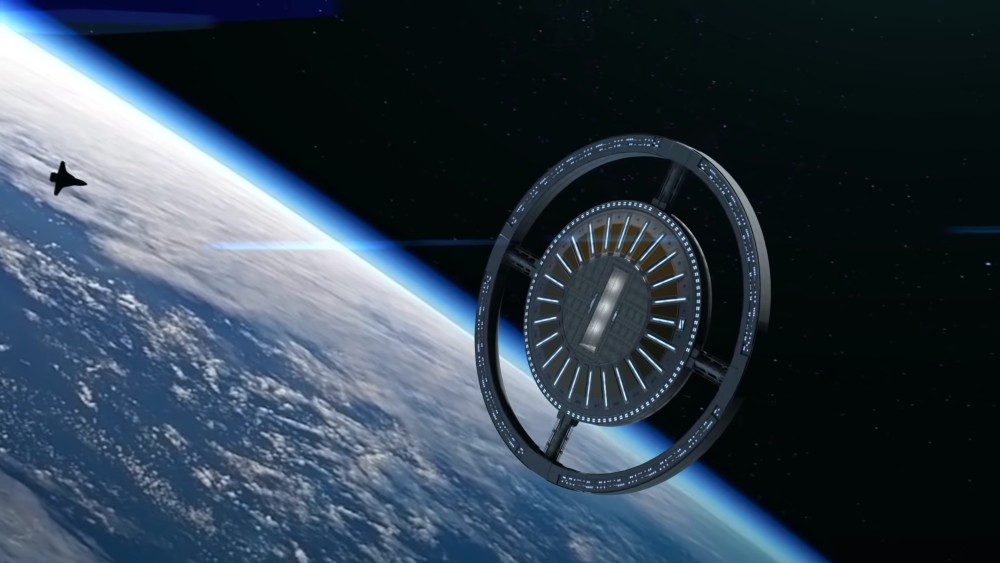 Taking an out-of-this-world vacation may soon be lot easier—literally. That’s because the galaxy is in line to get its first space hotel, if one group has its way.

The Gateway Foundation, which was formed specifically to establish a commercial spaceport, is currently designing the first space hotel, set to be named Von Braun Rotating Space Station, according to Dezeen. Likely to be history’s first commercial space station, the group envisions the ambitious project being completed by 2025.

“Eventually, going to space will just be another option people will pick for their vacation, just like going on a cruise, or going to Disney World,” Tim Alatorre, the senior design architect for the station, told the design website.

Based on a concept developed by Wernher von Braun, the hotel’s namesake, in the 1950s, the space hotel/station will consist of a 623-foot-diameter rotating wheel that will create a gravitational force similar to the one felt on the moon. The station will feature much of the same technology similar to that used on the International Space Station, but its artificial gravity will make both long- and short-term stays that much more pleasant.

The Von Braun’s rotating wheel will consist of 24 individual modules outfitted with life-support systems and sleeping accommodations. The Gateway Foundation expects the population of the station to be 400, and plans to sell modules as private residences, rent out others to governments for research purposes and turn the remaining, well, space, into a luxe hotel.

The group intends for that hotel to have the same amenities as a high-end property you’d find in New York, Tokyo or Paris. “There will also be many of the things you see on cruise ships: restaurants, bars, musical concerts, movie screenings, and educational seminars,” Altore told the website.

The Gateway Foundation expects the hotel, which will be able to handle 100 guests per week upon launch, to be more like well appointed earth-based peers than hyper-minimalist spaces imagined in movies like 2001: A Space Odyssey. In addition to breathtaking views of the moons, the station’s gravity means that there will full-featured dining facilities and bathrooms with a working toilet and shower. There will also be features that will bend the rules of space, like low-gravity basketball (dunks for everyone!), trampolining and rock-climbing facilities. The group also hopes to eventually offer “field trips” to other space stations or the moon.

The Von Braun is just the first part of the Gateway Foundation’s plan to host life in space. By 2030, the group hopes to have two other space stations in orbit, that would eventually be able to accommodate up to 10,000 space visits per year between them. Now all the company is waiting for is a group like SpaceX or Virgin Galactic to make commercial space flight reality. Check out Gateway Foundation’s video about the space station design below: