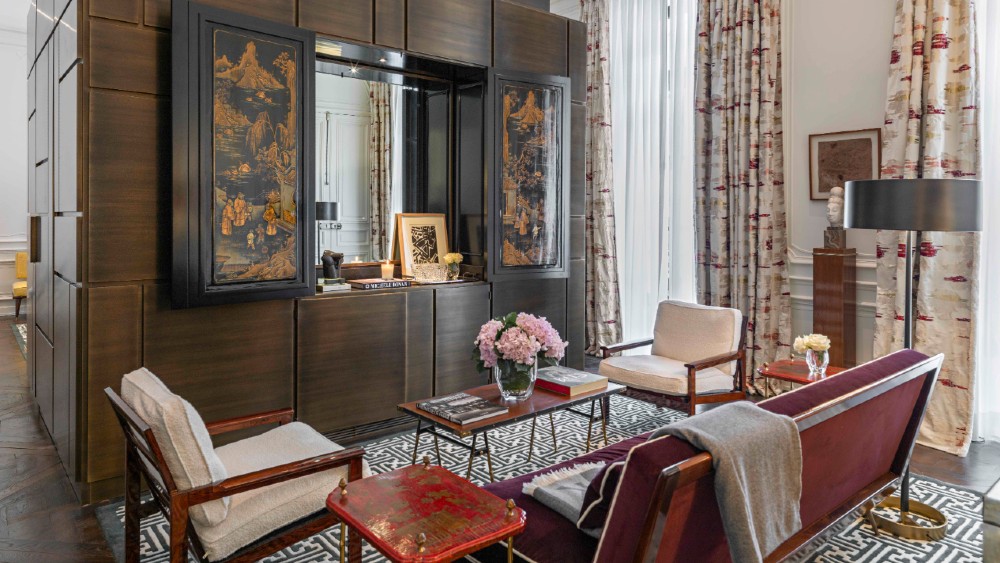 Paris is home to some of the most iconic luxury hotels in the world, so it takes a lot for yet another new opening to turn heads in the City of Lights. J.K. Place Paris, however, doesn’t fit the same-old five-star mold. A more than five-year project in the making, the 29-room property is the first outside of Italy for the J. K. brand, which has garnered a cult-like following among plugged-in travelers for its personalized service, home-away-from-home ambiance and elevated sense of style, which includes a unique décor in each room. Opened in late-November, the Paris outpost is set in the converted former European Consulate in the 7th Arrondissement, just off the Seine and a couple blocks from the Musée d’Orsay.

Even the bathrooms have plenty of style  Photo: Courtesy of J.K. Place Paris

The location on the Left Bank is just one of the ways J.K. Place Paris sets itself apart from the city’s larger palace-grade properties. “When you stay at a J.K., you’re not a hotel guest—you’re a guest at a friend’s home, and the staff are your warm hosts,” says the company’s owner and founder, Ori Kafri. “They find out your likes and dislikes and tailor your experience accordingly.” Kafri likens checking in to a J.K. to buying a couture dress or suit. “It’s a made to measure place, and everyone is a VIP.” That could mean a tour with a personal shopper for a guest into fashion, or surprising another with their favorite hard-to-find brand of chocolate.

Furnishings have been custom-made or culled from Parisian flea markets  Photo: Courtesy of J.K. Place Paris

Despite the hotel’s intimate size, guests can expect plenty of appealing amenities; as in all J.K.’s, breakfast and a minibar stocked with non-alcoholic drinks and snacks are complimentary, and facilities include an indoor pool and a Sisley Spa. Food and drinks come courtesy of Casa Tua, the Miami- and Aspen-based members club / Italian restaurant that has a similar guest-at-a-private house ethos. Casa Tua’s founder, Miky Grendene, says that the J.K.’s are where he often stays when he’s traveling in Italy, and that the collaboration with Paris was a natural fit. “Casa Tua and J.K. share a philosophy of treating our clients like friends,” he says.

One of the residential-style bedrooms  Photo: Courtesy of J.K. Place Paris

The two brands also share the talents of Michele Bonan, the prolific Florentine architect and interior designer known for his chic aesthetic. Many of the interiors for the J.K. Place Paris were custom-made for the hotel, such as the mother-of pearl inlay cabinets and low-slung metal armchairs in the spacious bathrooms. Bonan sourced other pieces—like a mid-century Hermès desk lamp and a smoky mirrored console—from Parisian flea markets.

While still new, the hotel is already establishing itself as a differentiator in Paris’s high-end hotel landscape. Michael Holtz, the owner of the luxury travel advisory SmartFlyer, has seen how much his clients love the brand in Italy, and feels that will translate well to Paris. “The other (five-star) properties are larger, and while they’re not impersonal, they generally can’t tap into their guests’ DNA in the same way that the J.K. will be able to do,” he says. “The size and style are hard to match among its competitors.” Rates start at approximately $1,000 a night.