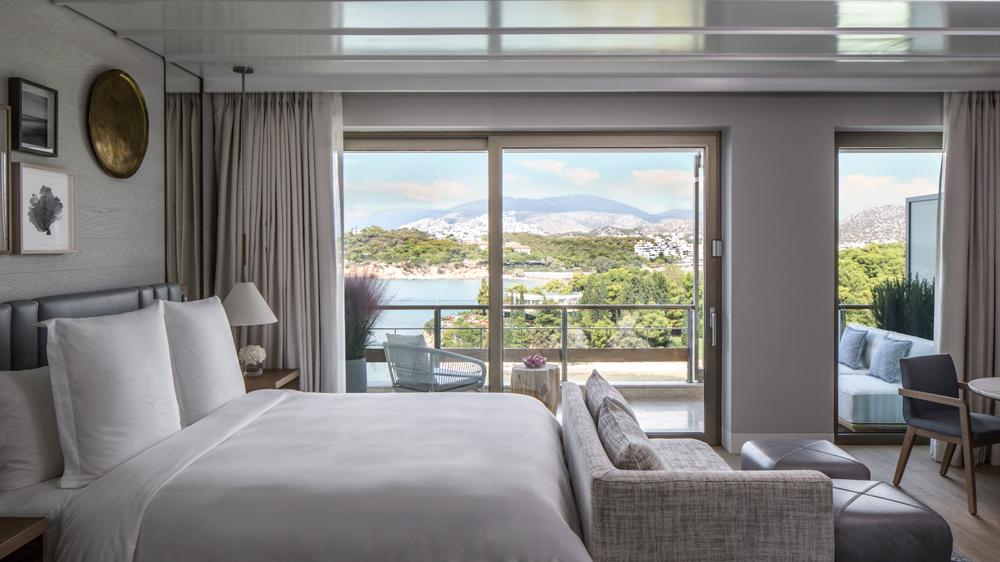 Athens, rightly, is the jumping-off point for most Greek adventures. The ancient city is a great place to tap into the pulse of modern Greece–evidenced by it’s thriving fine-jewelry industry–and offers a crash course in all of those sepia-toned granite and marble ruins you’ll see speckled throughout the isles as you make your way towards hotspots like Mykonos (where we’d suggest checking into the new Katikies hotel) or Santorini. Its only real shortcoming has been that there wasn’t a plush hotel that took full advantage of the rugged beaches that ring the city. Until now, that is. This spring will see the opening of the highly anticipated Four Seasons Hotel Astir Palace on those very beaches, giving well-heeled guests a chance to immerse themselves in the very best Greece has to offer.

The property, which is currently taking reservations for stays starting on March 29, 2019, is a revival of the iconic Athenian Riviera Hotel–a midcentury-modern answer to the city’s stately Hotel Grande Bretagne that had since fallen into disrepair. Though located just 30 minutes from the city center (a journey made even faster should you choose to hail a helicopter to whisk you into Athens from the hotel’s helipad), the hotel–the first for Four Seasons in Greece–feels a world away. This sense of isolation is thanks in part to the thick forest of pines that envelop the peninsula the hotel calls home, ensuring that even the guest rooms that don’t offer up views of the glistening Saronic Gulf have tranquil, nature-filled views. Inside, those 303 guest rooms, a combination of traditional rooms, suites, and original bungalows, have been designed to maximize those vistas: colors are kept to cool whites and grays broken up by the occasional flash of Grecian gold, and each features sweeping glass walls that fold back to reveal breezy patios overlooking the hotel’s private beach and pool.

That said, even if you aren’t spending the day out soaking in the sights and sounds of the city, you likely won’t be spending much time lounging on those balconies. Instead, you can stretch out on one of the three private beaches, eat your way through the property’s seven restaurants and bars–which include a seaside ceviche spot and a sexy cigar lounge–or indulge in a spa treatment inspired by the studies of Hippocrates. Should you crave a little bit more activity, you could also hike through the 75-acres of pines and private beaches the resort calls home, head over to the nearby village of Vouliagmeni for a soak in it’s thermal lake, or hail a private yacht from the nearby marina. And with perks this good, we wouldn’t blame you for wanting to extend your island hopping stop-over for a few more days.