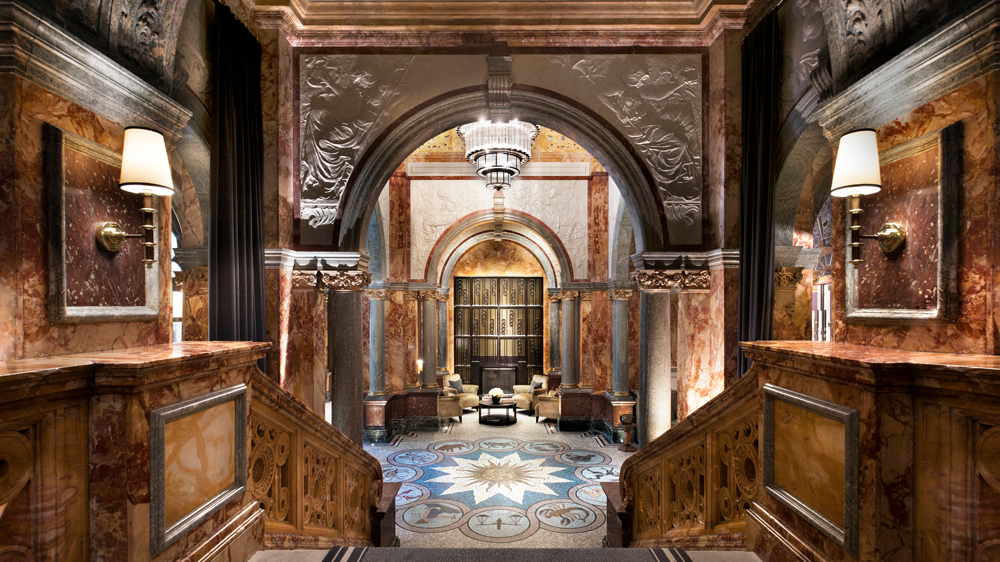 Long a favorite corner of London’s intelligentsia, the city’s Bloomsbury district is in the midst of a fully 21st century renaissance. Iconic properties like the Bloomsbury Hotel (which reopened earlier this year) that once played host to neighborhood denizens ranging from Virginia Woolf to John Maynard Keynes have been painstakingly restored and redesigned for a fresh generation of literati, deftly mixing history with modern amenities. Or, in the case of L’Oscar, another new hotel in the area, downright sexy design. The Principal London is the latest property in the quarter to enter into the mix, making the full debut of its Tara Bernerd & Partners­–led new look this summer.

Originally opened as Hotel Russell in 1898, the Charles Fitzroy Doll–designed property (who went on to oversee the lavish décor of the first-class dining room aboard the Titanic) helped set the tone for the aesthetic that would come to define the leafy area. And over the ensuing century, the Russell Square property’s Renaissance-revival terracotta façade and sweeping interiors spaces earned it the designation of a Grade II listed landmark building. The hotel’s fresh look, which guests were able to catch a glimpse of when parts of the property reopened in April, has expertly preserved this rich heritage—with Bernerd and her partners working equal parts as designers and custodians, coaxing the 120-year old grand dame back to life.

The resulting space takes full advantage of the building’s old bones—offsetting original marble surfaces in the public spaces with mid-century furniture and rich velvets to create a look that nods to a classic clubhouse, without ever feeling stuffy. Upstairs, the 334 guestrooms have a lighter touch, mixing creamy color palettes with plush accents: think canopied, four-poster beds and white marble-clad bathrooms replete with deep soaking tubs. The finished look expertly walks the line between honoring the hotel’s Victorian roots while staying firmly rooted in modern design.

Come cocktail hour, guests can mix and mingle downstairs at Fitz’s bar before heading into the art-deco style Neptune restaurant for seafood-focused fare ranging from caviar served alongside fluffy waffles to smoked eel chowder with quail and curry butter. Though both outlets have become fast-favorites with visitors and locals alike, come July 30th the Palm Court will resume its place as the heart of the hotel—and is sure to be where both intellectuals and jet setters come to see and be seen under the ornate ceilings.